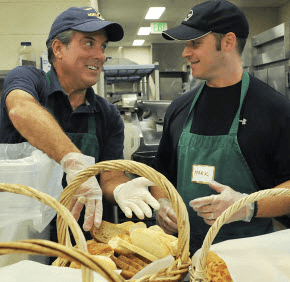 Major League Baseball umpire Mark Wegner got off the field at Camden Yards at 10:30 p.m. Sept. 6, after the Baltimore Orioles beat the New York Yankees 10-6, tying for first-place in the race for the American League East pennant.

At 9 a.m. the next morning, he was at Our Daily Bread, a Catholic Charities of Baltimore program that serves meals to the city’s homeless.

Wegner, 40, tries to visit Our Daily Bread every time he is in town for an Orioles series, once or twice a year, he said. On Sept. 7, he was part of the program’s 11,422nd day of uninterrupted food service.

Dressed in an Under Armour T-shirt, baseball cap and a green apron, Wegner worked with other volunteers to prepare tables, mix salads and fill plates for the lunch crowd, which began to arrive at 10:30 a.m.

A Catholic, Wegner first connected with Our Daily Bread 10 years ago, when it was located next to the Basilica of the Shrine of Assumption of the Blessed Virgin Mary on Cathedral Street, before it moved to the Fallsway in 2007. After attending Mass at the Basilica, he inquired at Catholic Charities for local volunteer opportunities. They sent him to Our Daily Bread.

“I have free time, and I try to use it productively, but nothing is more productive than, going to Mass, No. 1, but No. 2, coming to do some things like this,” said Wegner, who wears uniform No. 47.

Wegner was raised in St. Paul, Minn., where he attended Catholic schools and played baseball. After one semester at the University of Minnesota while umpiring Little League, he moved to Florida to attend the Brinkman-Froemming Umpire School in Cocoa.

He did well, and spent seven years umpiring in the minor leagues before moving to the major leagues 14 years ago. He lives near Tampa with his wife, Michelle, and their four children, who range in age from 1 to 14.

Wegner’s job takes him on the road six months each year, with four weeks of vacation. Our Daily Bread is the only place Wegner regularly volunteers outside of Tampa during the baseball season, he said. He also gives time to UMPS CARE Charities, an outreach of the MLB umpires, he said.

When he is home, Wegner is an active member of his parish, Nativity, in Brandon, Fla., where his kids also attend school.

Wegner clearly loves umpiring, but his favorite job is being a dad, he said. He is quick to show off family photos and a video of his 1-year-old son via his phone. He is also helping his kids develop hearts for service and, in the off-season, often takes his oldest sons to serve meals to Tampa’s homeless men and women, he said.

“There’s a lot of different ways to show the love God is showing to us to other people, but when it comes down to the basic need to eat, there’s something really special here,” he said. “It is an awesome, awesome thing to be able to do this.”

When he serves homeless men and women, he looks at each person as a “child of God,” he said.

“To me, every time I come in here, I just think that it’s almost like I’m serving Jesus today,” he added. “Each person I meet, I try to be respectful to them, and try … to show them that they’re human beings and that I care about them and I love them.”

As Wegner sees it, offering homeless people love and respect, as Our Daily Bread does, is as important as offering food, he said.

Wegner’s Catholic faith motivates his desire to serve. About six years ago, Wegner started attending daily Mass regularly, and searches for churches while traveling with a mobile phone app.

Daily Mass “just ends up being something I feel like I need, kind of like a workout every day,” he said. “People use different things to find their peace, and that’s been it for me.”

Wegner’s oldest sons sometimes travel with him, and he is thinking, he said, of bringing his oldest to Our Daily Bread next year.