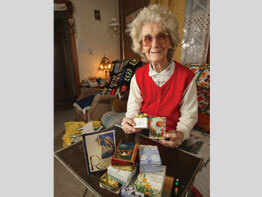 When Mary Chesnavage ran the lunch program at Sacred Heart of Mary School in Graceland Park, students ate nothing but the best.

“I didn’t do any of this frozen stuff,” Mrs. Chesnavage remembered with a laugh. “My brothers had farms, so they gave me fresh zucchini and corn on the cob. I would bake apple strudel and nut rolls and poppeyseed rolls. Everyone seemed to like it.”

Mrs. Chesnavage’s lunch program was considered groundbreaking back in the 1970s and 80s. She believes it was the first private school program in the region to participate in the federal program that provides free and reduced-cost lunches for students from families with low income.

“What I did was to arrange all the free and reduced lunches with students in private so that everyone had the same ticket and no one was embarrassed,” Mrs. Chesnavage said.

Now 87 and retired from the lunch room after 13 years of service, Mrs. Chesnavage remains as active as ever. She still makes her famous apple strudel to raise money for Sacred Heart of Mary. To benefit the parish, she also constructs zipper pullers and saves all her holiday cards – painstakingly folding them into colorful gift boxes that are used for special occasions like First Holy Communions and for the elderly in nursing homes. She visits the children in the school to teach them how to make the gift boxes.

Long ago, Mrs. Chesnavage taught herself to sew so that she would be able to make the religious habits for four of her daughters who became Sisters of the Holy Family of Nazareth. She still sews and takes care of the diaconal robes of her husband, Deacon Al Chesnavage of Sacred Heart of Mary. She has long been a familiar face at her parish – cooking for chicken dinners and helping whenever she can.

She gives back because she believes God has blessed her beyond her dreams.

“When I was young, I wanted to be a nun,” Mrs. Chesnavage said. But when she asked her pastor at Our Lady of Good Counsel in Locust Point about the religious life, he recommended that she marry so that she would be able to care for her parents as they got older.

Mrs. Chesnavage followed her pastor’s advice and met her future husband in a shorthand class. The two have been married 65 years and have cared for many of their sick and aging relatives over the decades. Mrs. Chesnavage’s 94-year-old brother currently lives with them.

“I always enjoyed learning new things,” she said. “I wasn’t afraid of electricity. I insulated the walls in the basement and paneled them.”

Told by her doctor that she would never have children, Mrs. Chesnavage said God blessed her with the “miracle” of 12 boys and girls. In addition to the four daughters who became nuns, three of her sons studied to become priests but never were ordained. One of her daughters is still in religious life today.

“I was always very mission-minded,” said Mrs. Chesnavage, a former president of her parish’s sodality who has taken courses in auto mechanics and cooking. “I felt like God needed me. He gave me 12 healthy children, so I felt like I have to give something back.”

Mrs. Chesnavage credited an active prayer life with giving her the strength to serve others. She prays the rosary several times a day and makes novenas.

“As long as I’m able to help, I’ll do it,” said Mrs. Chesnavage, who has suffered some health setbacks including a fractured hip and arms. “God has been good to me.”