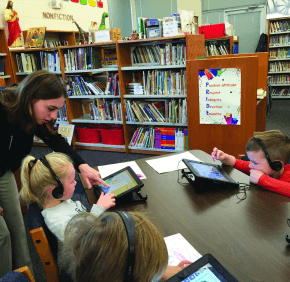 By Erik Zygmont
ezygmont@CatholicReview.org
ANNAPOLIS – Buoyed by polling data that shows seven in 10 Marylanders support the idea, the Maryland Catholic Conference has placed passage of the education tax credit as one of its major priorities for the state’s 2016 legislative session, which begins Jan. 13.
The bill would provide a 60 percent tax credit of up to $200,000 for businesses that donate to nonprofit student assistance organizations.
“We have a lot of momentum going into this session from last year on this bill,” said Garrett O’Day, associate director of education, children and families for the MCC, the legislative lobbying arm of the Maryland bishops.
Last legislative session, Archbishop William E. Lori joined Gov. Lawrence Hogan Jr. and other elected officials and education advocates – as well as private and Catholic school students across the state – in a March rally in Annapolis that challenged legislators to “give kids the credit.” The bill was never brought for a vote in the House of Delegates.
According to O’Day, the legislation would “incentivize $25 million” for education – prioritizing students from lower-income families eligible for free and reduced-price meals – by “giving back $15 million” in tax credits. The assistance organizations would help public school students pay for books, tutoring, special education services and other supports. They would assist private school students with tuition, though not at high-tuition schools.
Per a poll of 600 Maryland voters conducted in August by OpinionWorks, 63 percent supported the tax credit based on a brief description. After “having heard several facts” about the credit, according to poll analysis from OpinionWorks, support rose to 68 percent. It reported particularly high support among African-Americans, at 74 percent. Support among Baltimore City residents polled at 69 percent.
The bill also enjoys high support in Baltimore County, at 73 percent, according to the poll. John D’Adamo, principal of Our Lady of Grace School in Parkton, about six miles south of Pennsylvania, which has had an education tax credit in place for more than a decade, said Maryland “should be doing everything it can to support families who choose a faith-based education.”
In addition to passing the tax credit and battling a renewed push for doctor-assisted suicide, the MCC will pay close attention to the state’s budget and how it is appropriated.
A surplus of about $500 million is “an opportunity for a lot of fighting on how the money gets spent,” said Mary Ellen Russell, executive director of the MCC, noting that, while Hogan would likely push for fiscal restraint, legislators would push for spending.
The MCC, in the meantime, will be “protecting safety nets for the most vulnerable among us,” Russell said.
The organization also plans to support criminal penalty reform.
“Since we’ve repealed the death penalty, that’s kind of the logical next step for the church,” Russell said, adding that Pope Francis “has been very eloquent” on that topic.
O’Day noted that the Justice Reinvestment Coordinating Council, with members from the legislature as well as the Department of Juvenile Services, Office of the Public Defender and other stakeholders in criminal justice, has been meeting since June.
The council, he added, is trying “to find ways to reinvest portions of (state money) to place a greater focus on rehabilitation and re-entry into society.” It will likely introduce “omnibus legislation” that would address its concerns.
Dana Davenport, associate director of social and economic justice for the MCC, said the organization would support the Maryland Healthy Working Families Act. The bill would require employers of 10 or more to allow their employees to earn one hour of paid sick time for every 30 hours worked, up to seven days.
The MCC will also be looking for legislative opportunities to combat human trafficking and will be addressing, if it comes up, a surrogacy bill that, according to Anya Naegele, associate director of respect for life for the MCC, is “seeking to codify  surrogacy relationships.”
“The problem is that (the bill) is primarily aimed at protecting administrators of that contract, and not aimed at the well-being of the women and children who will be affected by it,” Naegele said.
Catholic Lobby Night
What: Learn more about Maryland issues from a Catholic perspective; join other Catholics to advocate for that perspective.
Where: St. John Neumann Mission Church, 620 N. Bestgate Road, Annapolis
When: Feb. 9. 3 p.m. for issue briefings; shuttles begin at 4:30 p.m. to visit legislators’ offices, from 5 to 6 p.m. Dinner reception with Maryland bishops, legislators and fellow Catholics follows in Miller Senate Office Building, 6 p.m.
Register: The event is free; however, registration is required.
PrevNext