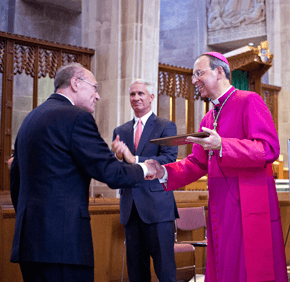 By George P. Matysek Jr.
gmatysek@CatholicReview.org
Twitter: @ReviewMatysek
In a gathering that celebrated the Archdiocese of Baltimore’s deep roots in Catholic education, more than 1,600 Catholic school educators crammed the Cathedral of Mary Our Queen in Homeland Aug. 22 for the annual Catholic Schools Convocation.
The event marked the kickoff of the Aug. 26 start of the 2014-15 school year. For many, it was also their first chance to meet James Sellinger, the archdiocese’s newly appointed schools chancellor.
In introducing himself to his colleagues, Sellinger pledged to visit schools throughout the archdiocese, learn their challenges and develop “best practices” for strengthening Catholic education.
To view a slideshow from the event, navigate the arrows below.
If you see a photo you would like to purchase, click here.
“This is a team sport,” Sellinger said, “and our success is going to be determined by how well we learn, respect, operate and execute as a team. We all need to be on the same page of the playbook.”
Sellinger’s responsibilities as the archdiocese’s first schools chancellor will focus on marketing, enrollment and the fiscal health of approximately 50 Catholic schools. He will work closely with Dr. Barbara McGraw Edmondson, superintendent, who will handle academics and the day-to-day running of the school system.
The new chancellor said there is a need to establish an “effective” Catholic schools brand and to strengthen school boards.
Baltimore’s historic role in nurturing Catholic education was underscored throughout the half-day convocation.
Dr. Edmondson pointed out that it was at the Basilica of the National Shrine of the Assumption of the Blessed Virgin Mary in Baltimore where the nation’s bishops met in the 19th century to promote Catholic education.
Sulpician Father John Kemper, director of St. Mary’s Spiritual Center in Baltimore, highlighted three women religious groundbreakers in Catholic education: St. Elizabeth Ann Seton, who started a school in Baltimore and then promoted Catholic education in Emmitsburg; Mother Mary Lange, who established the first Catholic school for African Americans and founded the Oblate Sisters of Providence; and Mother Theresa Maxis Duchemin, a founding member of the Oblates and co-founder of the Sisters, Servants of the Immaculate Heart of Mary.
Father Kemper referred to a famous quote from Winston Churchill, adapting it to the sisters: “Never have so many owed so much to so few.”
Large video screens were set up throughout the cavernous cathedral, broadcasting the opening Mass for worshippers who filled every pew and also packed the chapels.
Archbishop William E. Lori said the cathedral was an appropriate host for the opening Mass, which fell on the feast of Mary Our Queen.
Catholic schools excel, Archbishop Lori said in his homily, not because they have an abundance of money, but because they promote a learning environment “marked by the truths, virtues and values” of what he called the “kingdom of the Beatitudes.”
“By the witness of our own lives of faith,” he said, “we encourage our students to chart the course of their lives toward that kingdom where Christ and Mary reign in the love of God the Father.”
Following the Mass, the Doris Musil Award, the archdiocese’s highest education honor, was presented to Gregory Jones, former principal of Monsignor Slade Catholic School in Glen Burnie, a former assistant superintendent and a former teacher at Madonna Middle School in Baltimore. Thirteen teachers were recognized with awards for teaching excellence.
Educators who marked special anniversaries were also recognized in a published program, including Christian Brother John Lawless of Calvert Hall College High School, who has served the Towson school for 60 years.
In his keynote address, Brian K. Johnson, director of the office of adolescent catechesis and evangelization with the Archdiocese of Galveston-Houston, called all Catholic educators “evangelists.”
“You are heralds,” said Johnson, a Baltimore native who once taught at the St. Cecilia campus of the Rosa Parks Cluster School. “You are witnesses. You point young people to the light.”
Standing outside the cathedral as raindrops began to fall after the convocation, Donna Bridickas, president of The Seton Keough High School in Baltimore called it “uplifting” to see so many educators come together in a spirit of prayer.
“There’s a feeling of community,” she said. “We recognize how important we are in the lives of children every day.”
Also see:
New presidents, principals to lead Catholic schools
‘Wake up call’: Sellinger takes on new role as chancellor of schools
PrevNext