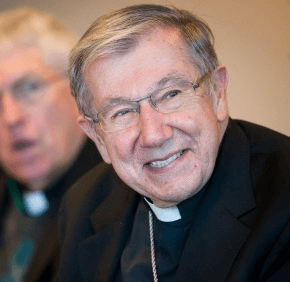 By Catholic News Service
NEW ORLEANS (CNS) – A key action at the Evangelical Lutheran Church of America Churchwide Assembly in New Orleans was the approval Aug. 10 by 980 voting members of a document that marks 50 years of Lutheran-Catholic dialogue.
Titled “Declaration on the Way: Church, Ministry and Eucharist,” the new 120-page document discusses the progress in Catholic-Lutheran relations and maps the remaining steps needed to achieve full unity.
The document was prepared by a joint task force of the U.S. Conference of Catholic Bishops’ Committee on Ecumenical and Interreligious Affairs and the Chicago-based Evangelical Lutheran Church in America, which has more than 3.7 million members in 9,300 congregations across the United States.
It was affirmed last October by the ELCA Conference of Bishops, an advisory body, which asked the ELCA Church Council to forward the document to the 2016 ELCA Churchwide Assembly, its highest legislative body. The assembly is meeting in New Orleans Aug. 8-13.
“The text invites ELCA members to claim and to celebrate how far Catholics and Lutherans have come in ecumenical dialogue,” said the Rev. Mark S. Hanson, a former presiding bishop of the ELCA.
The document, he said in a statement, “seeks to inspire ELCA members to continue the theological work which Lutherans and Catholics have done together so fruitfully; to continue to grow in common prayer and study; and to continue collaboration and care for the hurting world which God so loves.”
“The hope is that this declaration can contribute to this ongoing reformation of the church and to grow in communion between Catholics and Lutherans,” said Baltimore Auxiliary Bishop Denis J. Madden.
Rev. Hanson and Bishop Madden were the Lutheran and Catholic co-chairmen, respectively, of the task force that worked on the document.
It was inspired by a December 2011 speech by Cardinal Kurt Koch, president of the Pontifical Council for Promoting Christian Unity, and draws on the work of national and international Catholic-Lutheran dialogues since 1965, particularly on the topics of church, ministry and the Eucharist.
Evangelical Lutheran Church of America Churchwide Assembly was meeting in preparation for the 500th anniversary observance of the Protestant Reformation in 2017.
Copyright ©2016 Catholic News Service/U.S. Conference of Catholic Bishops.
PrevNext