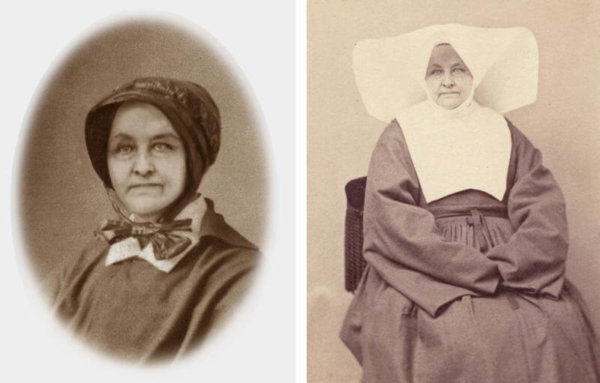 Women’s History Month is the perfect time to celebrate the legacies of the many congregations of women religious who pioneered health care, education and social services in the United States.

One such community is the Daughters of Charity, whose sisters nursed the war wounded, braved epidemics of yellow fever and Spanish flu, staffed havens for homeless children and taught the gamut of students from preschoolers to postgraduates.

The Daughters of Charity were introduced to the United States in 1850, but in reality, that first group of sisters who donned the blue-gray habit and the iconic cornette had been active for some 40 years as Sisters of Charity of St. Joseph’s, the community founded by St. Elizabeth Ann Seton in Emmitsburg, Maryland.

The history of how they came to merge with the original “Company” founded in Paris in 1633 by St. Vincent de Paul and St. Louise de Marillac is an interesting narrative of how several other congregations became Sisters of Charity in America.

In 1809, John Carroll, then-bishop of the sole American diocese, and members of a group of French emigre Sulpician fathers had been encouraging the newly converted Elizabeth Ann Seton to form a religious community.

Knowing the services that women could provide the growing church, they accepted Mother Seton as she made her first vows and with the support and connections of St. Mary’s Seminary in Baltimore and Mount St. Mary’s Seminary in Emmitsburg, helped her to establish herself and a small corps of women in that latter town.

As a model on which to base the new community, the Sulpicians proposed the Rule that St. Vincent had created for his Daughters of Charity in Paris. In fact, the clergy even entertained the prospect of bringing some sisters from Paris to organize the fledgling community.

A letter in the Daughters of Charity provincial archives notes that 18 sisters were ready but, in the end, they were not permitted to leave France. So, Bishop Benedict Flaget gave a copy of Vincent’s Rule to his fellow Sulpician Father John Dubois, who translated and revised it into a spiritual road map for an American community. It was this Rule that Mother Seton and her sisters voted to accept.

The reputation of these “black cap” sisters and their Emmitsburg school soon spread. In 1814, just four years after the initial members took their first vows, sisters were called to Philadelphia to open the first Catholic orphanage. Requests quickly followed until they were operating schools, hospitals and asylums from the easternmost parts of the Baltimore Archdiocese to its western boundary at the Mississippi River.

Such success, though, took a toll on the home community. Some prelates in new cities where the sisters were missioned proposed that they be removed from Emmitsburg’s authority and placed under local diocesan control, placing the sisters in the awkward position of having to choose allegiance. Some decided to remain with their new missions while others opted to return to Emmitsburg.

Despite their emotional growing pains, all of the sisters recognized that they stemmed from Mother Seton’s community, remaining true to their original Rule as they eagerly accepted every call to serve Catholics in the growing nation.

Following much debate throughout the 1840s, those still vowed to Emmitsburg voted to merge with the Daughters in Paris. In 1850, they exchanged their version of the “black caps” as worn by the other Charities for cornettes.

One can only speculate how this story might have changed had the 18 French Daughters arrived in America. In the end, however, all the American Charities who follow the Vincentian Rule — both Daughters and Sisters — thrived (and continue to do so), crafting their own narratives rich in living examples worthy of note during this month dedicated to women’s history.

Denise Gallo is provincial archivist for the Daughters of Charity, Province of St. Louise. The archives are located in Emmitsburg, Maryland, near the site of the founding of St. Elizabeth Ann Seton’s Sisters of Charity of St. Joseph’s.