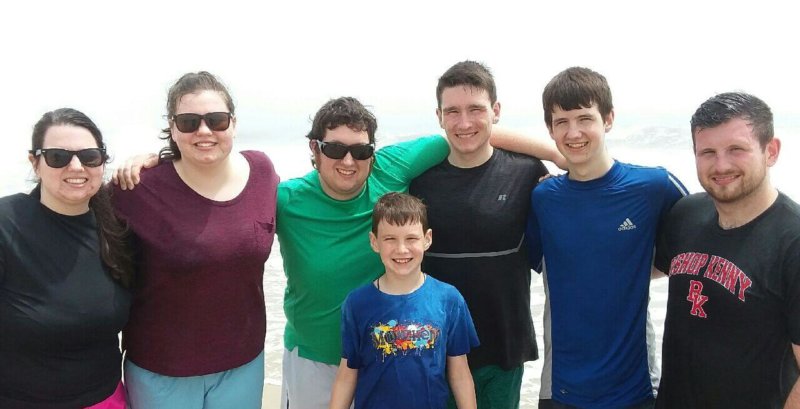 Brothers and sisters in the Kirby Family are shown at the beach. From left to right are: : Helen, Theresa, Bill, Stephen, Matthias and Ben Kirby, with Leo Kirby in the center. (Courtesy Kirby Family)

Editor’s Note: The authors were inspired to write the following commentary in response to this column  that appeared in America Magazine.

Stephen Kirby, our middle son, has been discerning the priesthood since seventh grade, and recently he endured a barrage of tests and interviews and was admitted into the Archdiocese of Baltimore’s college seminary program.

He knows he follows in the footsteps of imperfect and sometimes evil men. I have shared my story of the priest abuser in my (overseas) childhood community, who died long ago and is yet to be disgraced publicly. Our son lived through our family’s long involvement and break with a lay movement whose founder was found reprehensible.

With last summer’s horrific revelations, we’re of course struggling to trust. Quo Veritas? We wait vainly for public statements of remorse and contrition from the McCarrick and Maciel inner circles, and upper Vatican echelons. There’s nothing like enduring thoughtless remarks at summer barbecues, such as, “Priests are all pedophiles!” The response now trips off my tongue effortlessly: “Uhhh, why don’t you go over there and tell that to our son’s face?”

We’ve attended meetings with the archdiocese, seminary rectors and those between parish clergy and parishioners. We’ve written to archbishops, signed petitions and prayed – angrily and tearfully. And still, fresh nauseating betrayals are revealed almost weekly.

Jesus promised the gates of Hell would not prevail. Can we entrust the Church with our son(s)? Are we naïve and gullible parents? Why does our son remain, and why did he see his 15-year-old brother in July at Baltimore’s “Quo Vadis” vocational discernment camp?

He’s an adult. We (imperfectly) raised him in the faith in a great parish serving with (imperfect) amazing parishioners. He’s encountered many priests, deacons, religious sisters and visiting seminarians, sinners all. He’s endured disappointments, sorrows, joys and ordinariness of family life and a post-Christian culture. He knows Christ promises joy and suffering in ALL vocations. He knows what grooming looks like, and he knows he can call us or older siblings if he encounters it. Yes, he’s young, but so are those new Army recruits, highway construction apprentices and college freshman. Do we cushion him from EVERYTHING?

He’s in a fantastic seminary: St. John Paul II Seminary in the Archdiocese of Washington, D.C. is fantastic.  Every day, more than 50 college seminarians there attend Mass, pray the Liturgy of the Hours and commit to eucharistic adoration. They have regular confession, spiritual direction and attend Catholic University as philosophy students. They serve “in-house” (raking leaves, dish washing) and out (soup kitchens, schools, the Missionaries of Charity).  They give up all social media in sophomore year. Their rectors and spiritual directors form them – with their consent! – to be joyful, good and humble men seeking holiness in whatever becomes their vocation. Our son’s “brothers” have great senses of humor and enjoy sports, music and hobbies. Will they all sin? Yes. Might some of them fall terribly? Yes.

He wants to be part of the solution. The Holy Spirit and Blessed Mother are cleaning house. Aren’t young people now discerning in seminaries, convents and monasteries part of her plan? If our child desired to be a firefighter, would we say, “No, under no circumstances should you run into a burning building!”  (Note: There are some seminaries, dioceses and religious orders against which we’d caution him.) In (imperfect) Baltimore, we say to our own children, “Fight that fire!”

We won’t pit ourselves against God. We didn’t call him to this. We try to trust in God’s mysterious providence.  We don’t pretend to completely understand this complex situation, or how our son will navigate it. We entrust him to Mother Mary, and he has his siblings’ phone numbers. He and his brother seminarians know they’ll be wounded in this discernment – the Lord guarantees all of us Christians at least a shoulder wound.

Finally: Baltimore’s Quo Vadis discernment camp? Our younger son, his friends and more than 65 campers couldn’t wait to attend. The camp has strict rules which are enforced. He’ll return next year!

So – Duc in Altum: Into the deep, everybody! Let’s remain united to fight the evil in whatever way God calls us.

Our Lady, Mother of the Clergy and Religious, and St. Jean-Marie Vianney, pray for us!

Click below to listen to a radio interview with Father Steven Roth, vocations director for the Archdiocese of Baltimore.

Kathryn and Larry Kirby live in Severna Park, Maryland with their children and are parishioners of St. John the Evangelist Church.