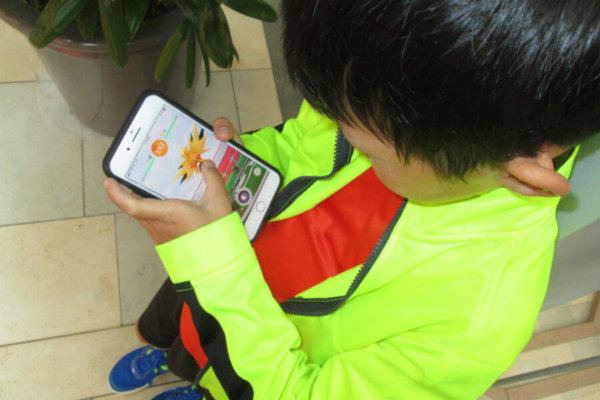 One of my favorite ways to spend a day is to split our family in half and have each parent take one of the boys on an outing. Sometimes we just go to the grocery store, but every once in a while we kick it up a notch and try something special.

On Saturday morning half of our family went to see a movie, and Daniel and I went to a batting cage and then to the mall. He picked a lunch spot where he could watch the Orioles game while he ate his burger and mashed potatoes, and then we headed on a long walk through the mall to get back to our car.

As we were about to step outside, though, I realized I had left my umbrella at the restaurant. So we headed back. And, as we walked through the mall, we saw a large group of people gathered—a few families with children, but mostly teens and young people in their 20s.

“It’s a raid, Mom!” Daniel told me—surveying the crowd and holding my phone up to show me the Pokemon Go screen. “There’s a Zapdos!”

There was no question in my mind. Of course we were going to join this group of random strangers and battle in this virtual raid on this game on our phones. So we did, as Daniel picked six Pokemon to take on this rare, legendary Pokemon, a Zapdos, one too strong to defeat ourselves, but easily within our reach when we were part of this crowd of Pokemon Goers at the mall.

As we were standing there, a few mall shoppers approached me—maybe because I looked approachable, or maybe because I was the only person not staring down at my phone and tapping a picture of a Pokemon.

“Is there something special happening here today?” one woman asked.

“Is there a sale?” asked another.

“Do you have any idea what’s going on?”

I explained that it was a Pokemon Go event, which somehow seemed to bring both clarity and confusion. That just added to the excitement of it all for Daniel and me—that not everyone knew what was happening—but we did.

Working with the other Pokemon Goers, Daniel won and caught the Zapdos and earned lots of points and extra virtual goodies. Then we walked a little further through the mall and encountered yet another Pokemon Go raid and had fun all over again.

Trust me. It was a thrill—the cherry on the top of a terrific mother-son outing.

Two years into playing Pokemon Go, my sons and I may not be playing with the same enthusiasm we did when it started. But there’s still plenty of excitement there. And, as it turns out, we’re clearly not the only people still playing the game.

Just think of the fun we would have missed if I hadn’t forgotten my umbrella.