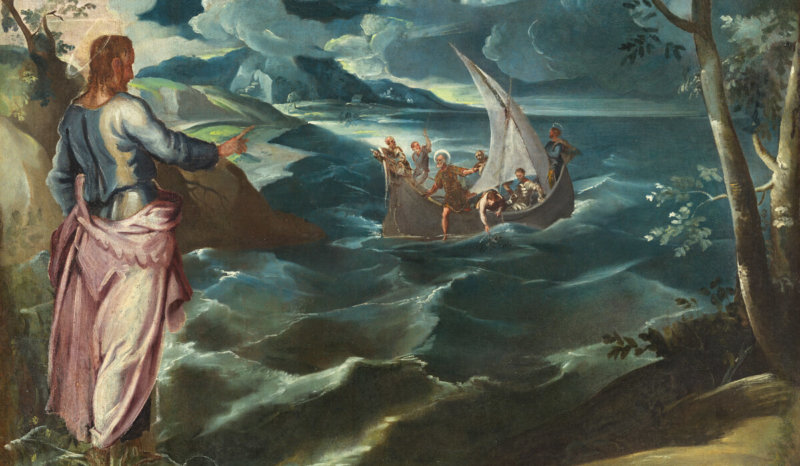 I am in Washington, DC this week for meetings of the USCCB. Since formal proceedings didn’t begin until the evening, I found myself yesterday morning with a little free time. So I made my way to one of my favorite places in the city, the National Gallery of Art, which I frequented when I was a student at Catholic University many years ago.

At the close of a long session of walking and musing, I was drawn by an empty and comfortable-looking couch situated at the end of one of the galleries. Plopping down to rest, I looked up at the picture right in front of me. At first glance, given the color scheme and the peculiar modeling of the figures, I thought it was an El Greco, but closer examination revealed that it in fact was Tintoretto’s depiction of Christ at the Sea of Galilee. The drama at the center of the composition is the Apostles’ boat, buffeted by choppy waves, and St. Peter taking a gingerly, tentative step onto the bounding main at the invitation of the Lord who beckons to him. My seated posture conduced toward contemplation, and I spent a good deal of time with this painting, first admiring the obvious technical skill of the painter, especially in the rendering of the water, but eventually moving to a deeper perception of its spiritual theme, of particular resonance today.

Whenever the Gospels present the disciples of Jesus in a boat, they are, of course, symbolically representing the Church. So Tintoretto is showing the Church in its practically permanent condition across the ages: at sea, rocked by waves, in danger of going under. Indeed, with a handful of remarkable exceptions, every age has been, in some way, a perilous one for the Mystical Body of Christ. The boat is filled with the specially-chosen Apostles of the Lord, those who spent years with the Master, learning his mind, watching his moves, witnessing his miracles with their own eyes, taking in his spirit. One would think that even if everyone else failed to follow the Lord, these men would hold steady. And yet we see them cowering, timorous, obviously at a loss as the storm rages around them. And the Gospels, in a manner that sets them apart from most other literature dealing with religious founders and their disciples, do consistently portray Jesus’ inner circle as deeply flawed. Peter denied the Lord at the moment of truth; James and John succumbed to petty ambition; Thomas refused to believe the report of the Resurrection; Judas betrayed his master; all of them, with the exception of John, abandoned him on the cross, protecting their own hides. And yet Tintoretto shows Peter tentatively placing his foot upon the sea, commencing to walk toward Jesus. The great spiritual lesson—shopworn perhaps to the point of being a cliché, but still worth repeating—is that as long as the Church keeps its eyes fixed on Christ, it can survive even the worst of storms. It can walk on the water.

The Catholic Church is once more enduring a moment of extreme trial in regard to sexual abuse. This time, the focus of attention is on the failure of some bishops to protect the vulnerable, and in at least one terrible case, the active abuse perpetrated by a cardinal archbishop. The whole world is rightly outraged by these sins, and the Church appropriately feels ashamed. Many wonder, understandably, how those specially devoted to Christ could fall into such depravity. But then we recall that every bishop today is a successor of the Apostles—which is to say, of that band that both sat in easy familiarity with Jesus and denied, betrayed, and ran from their Master. In stormy times, the first Apostles cowered, and their successors, we have to admit, often do the same.

But there are grounds for hope. They are found, however, not in institutional reform (as important as that is), not in psychological analysis (as indispensable as that might be), not in new programs and protocols (as helpful as they might prove), but rather in a return to Jesus Christ. Eyes fixed on him, hearts attuned to him, minds beguiled by him, action determined by him, the leaders of the Church can, even now, walk on the water.

Tintoretto sheds considerable light on this issue of Apostolic weakness and strength in the very manner in which he has arranged the figures in his composition. The painting is foreshortened in such a way that the disciples appear very small, almost doll-like, whereas Jesus, looming in the extreme foreground, looks gigantic. As John the Baptist put the principle: “He must increase and I must decrease.” When our anxieties and egos are placed in the foreground, Christ necessarily recedes. Crucial to the reformation of the Church is the reversal of that perspective.