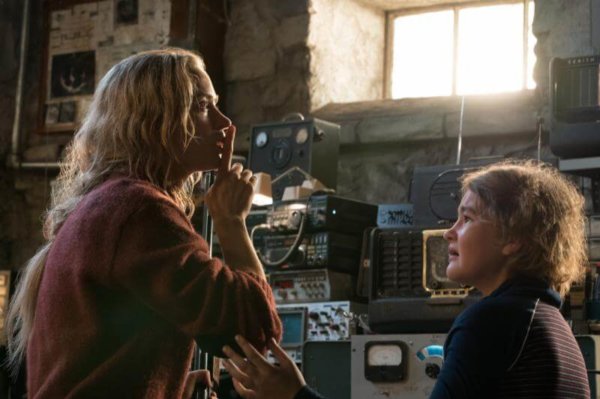 Emily Blunt and Millicent Simmonds star in a scene from the movie "A Quite Place." The Catholic News Service classification is A-III -- adults. The Motion Picture Association of America rating is PG-13 -- parents strongly cautioned. Some material may be inappropriate for children under 13. (CNS photo/Paramount)

**SPOILER ALERT! This column contains many spoilers about the film**

I went to see A Quiet Place, John Krasinski’s new thriller, with absolutely no anticipation of finding theological or spiritual themes. I just wanted a fun evening at the movies. How wonderful when a film surprises you! I don’t know if I can find the golden thread that draws all of these themes together into a coherent message, but I think one would have to be blind not to see a number of religious motifs in this absorbing film.

The basic structure of the narrative is laid out in simple, deft strokes. We learn that a terrible plague of fierce, devouring creatures has descended on the earth. Where are the monsters from? Outer space, maybe? We’re never told—which makes the story more compelling. The few people who have survived the holocaust have learned that the creatures, though blind, are extraordinarily acute of hearing. Therefore, the key to survival is silence. Our attention becomes focused on the Abbot family, two youthful parents and three small children, making their quiet way through a beautiful but dangerous open country. When the youngest of the kids flips a switch on his toy rocket, causing buzzing sound to pierce the silence, one of the beasts devours him just before his terrified father can save him.

We flash-forward several months later, and we watch the Abbots (can the name have possibly been accidental?) going about their lives in what could only be characterized as a monastic manner: no conversations above a whisper, elaborate sign language, quiet work at books and in the fields, silent but obviously fervent prayer before the evening meal, etc. (I will confess that this last gesture, so thoroughly absent from movies and television today, startled me.) Given the awful demands of the moment, any gadgets, machines, electronic entertainment, or noisy implements are out of the question. Their farming is by hand; their fishing is done with pre-modern equipment; even their walking about is done barefoot. And what is most marvelous to behold is that, in this prayerful, quiet, pre-modern atmosphere, even with the threat of imminent death constantly looming, a generous and mutually self-sacrificing family flourishes. The parents care for and protect their children, and the remaining brother and sister are solicitous toward one another and toward their parents. The young girl even regularly risks her life to pay silent tribute to her fallen brother at the spot where he was killed.

Monsters and beasts in the more reflective horror movies are evocative of those things that frighten us the most: illness, failure, our own wickedness, death itself. How wonderful that a Hollywood movie would suggest that what is needed to keep the darkness at bay in our time is silence, simplicity, a return to the earth, prayer, and care for one another.

The central drama of A Quiet Place is that Mrs. Abbott is expecting a child. The entire family realizes, of course, that a wailing infant would, given the circumstances, mean almost certain death for all of them. And yet, they decide not to kill the child at his birth but to hide him and mute his cries in various ways. When so many in our culture are willing to murder their children for the flimsiest of reasons, when the law gives full protection even to partial-birth abortion, when people blithely say that they would never bring a baby into such a terrible world, the monastic family in this film welcomes life, even into the worst of worlds, and even when such an act is of supreme danger to them. As the baby is coming into the light, the mother finds herself alone (watch the film for the details) and in the most vulnerable situation, for one of the beasts has made its way into their house. As she labors to give birth, the devouring animal lurks. I was put immediately in mind of the scene in the book of Revelation, where Mary is in the throes of child birth as the dragon patiently waits to consume the child.

As the abbess is struggling to give birth, the abbot has gone in search of his endangered children. He finds them, to his horror, trapped in an abandoned car, one of the beasts clawing at them through the roof, like the T-Rex in Jurassic Park. After mouthing the words, “I love you; I have always loved you” to his daughter, who gapes at him through the car window, the father screams, drawing the monster to himself. This act of self-emptying love, which serves to liberate his children from danger, is beautifully evocative of the speculations of the Church Fathers regarding the death of Jesus. In his act of self-sacrifice on the cross, the fathers argued, Jesus lured the dark powers into the open and away from the human beings who had been in their thrall. Along similar lines, in an odd working of plot or Providence that can be likened to the efficacy of Christ’s sacrifice, it becomes clear in the wake of the father’s death that he has left behind for his family the means by which the monsters can be defeated.

I have no real idea whether any or all of this was in the mind of the filmmaker, but I do know from John Krasinski’s Wikipedia page that he is the son of a Polish-Catholic father and an Irish-Catholic mother and that he was raised a devout practicer of his faith. So until definitively shown otherwise, I am going to maintain that A Quiet Place is the most unexpectedly religious film of 2018.