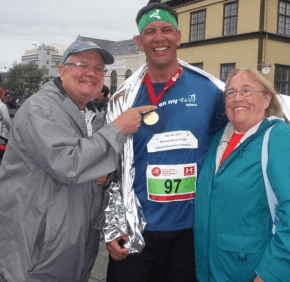 Chris Conlon's biggest supporters are his parents
Fourth in a Series
Editor’s Note: Inspired by Matthew 25:40-45, which concludes ” … what you did not do for one of these least ones, you did not do for me,” each month in 2017 the Review will provide an in-depth look at the Catholic Church’s response to those in dire need.
Chris Conlon’s acting credits include “Parks and Recreation,” “House of Cards” and “Veep.” An accomplished endurance athlete, he’ll make his Boston Marathon debut April 17. His passports are stamped with bucket-list destinations, and he has prayed in more Catholic churches than a 16th-century missionary.
Conlon has seen and done things you wouldn’t believe – he just can’t tell you about them.
The telecommunications engineer lost the ability to read, write in sentences and converse beyond a frustrating phrase or two in December 2012, when a major stroke left him with severe aphasia and apraxia.
The ordeal has only served to strengthen the faith that led him to teach religious education in his 20s and solidify the formation of even his parents. He continues to encourage, inspire and lead, albeit with help from his church, family and friends, who are simply reciprocating the kindness Conlon has spread over his 41 years all over this earth.

Army brat
More than two decades after he had taught sophomore religion at Archbishop Spalding High School in Severn during the 1991-92 school year, Father Thomas Malia was greeted by one of his former students after a weekend Mass at Holy Cross in Federal Hill.
“He was just a bigger version of the 16-year-old Chris,” Father Malia said. “I remember him being unbelievably kind and thoughtful. He struck me, even back then (at Spalding), as someone who had a different, more mature understanding of life. I presume that came from his parents.”
Asked about them, Conlon replied, “blessing.”
He and his three younger siblings are Army brats, raised by their parents, Ron and Renate, on Fort Meade and installations in California, New Mexico, New York, Ohio and Virginia. The kids learned to ski in the Alps, when their father was stationed in Germany.
Wherever he has gone, Conlon has accumulated experiences, friends and knowledge he is eager to share.
His mother said his commitment to the Catholic Church blossomed when he was an undergrad at the Rochester Institute of Technology and a fixture at its Newman Center.
Back home, Conlon taught religious education to teens at St. Lawrence Martyr in Jessup. His father recruited him to the Knights of Columbus; he brought his parents and his sister, Sandy, into the Cursillo movement.
Conlon was hush-hush about his work as a telecommunications engineer for a government contractor, but loved sharing anecdotes and selfies, whether it was with Julia Louis-Dreyfus and Vice President Joe Biden from his Screen Actors Guild days as a non-speaking extra; breaking four hours in the 2003 Baltimore Marathon – or his affinity for all things Catholic.
“He’ll go inside any church he passes,” his mother said, of visits that have taken on greater meaning.
Evangelist
On the day after Christmas in 2012, Conlon underwent routine knee surgery. Two days later, following doctor’s orders, he was taking a walk when a blood clot traveled through a hole in his heart and lodged against his brain. He endured temporary paralysis on his right side and permanent communications challenges.
“He does get down sometimes,” his mother said. “He turns to the church for prayers when he reaches that stage in his life. Father Patrick (Carrion) has helped in that regard tremendously.”

Chris Conlon is active in the Catholic Community of South Baltimore, where his pastor is Father Patrick Carrion, who describes him as “one of my go-to people.” (Christopher Gunty/CR Staff)

When he became pastor of the Catholic Community of South Baltimore in 2008, Father Carrion found an asset in Conlon.
“He was always one of my go-to people; faithful, participative, cooperative,” Father Carrion said. “He’s come a long way. I know that if I were in his situation, it would be frustrating. Regardless of the specifics of what he’s trying to communicate, his sincerity comes out.”
In September 2015, Father Carrion found tickets for Conlon to attend the Mass celebrated by Pope Francis in Washington, D.C. In return, the parish got a renewed evangelist, as evidenced by Mary Greenberg.
A paralegal, in February she finally said yes to a standing invitation from the man she calls the “unofficial mayor of Baltimore” to join one of the young adult socials the Catholic Community of South Baltimore organizes after 5 p.m. Mass.
“He’s very involved in the (parish), and he’s tried to get me more involved,” said Greenberg, who met Conlon at a flag football game the autumn after his stroke. “It’s interesting to see a man transform himself into a new way of life. I’m told he was an awesome individual before. Nothing’s changed. That’s a gift, to be able to touch so many people just by being yourself.”
No longer able to work, Conlon draws on disability insurance and his parents. Last May, they worked the support vehicle as he cycled from Babe Ruth’s birthplace to the Baseball Hall of Fame in Cooperstown, N.Y. They hired a personal trainer who helped him complete his first Ironman triathlon last September, on a sweltering day in Chattanooga, Tenn.
“He keeps us going,” his mother said.
As winter turned to spring, Conlon continued to, as he put it, “train, train, train” for the Boston Marathon, while simultaneously raising funds for Back on My Feet. Since 2009, he has volunteered with the national nonprofit which uses running to combat the effects of homelessness.
Why help then? Why help now?
“God,” Conlon answered.
Also see:
The Least of These: Church helps fight opioid addiction
The Least of These: As weather turns, Davidsonville parishioners open doors, hearts

The Least of These: Serving students with special needs, joyfully