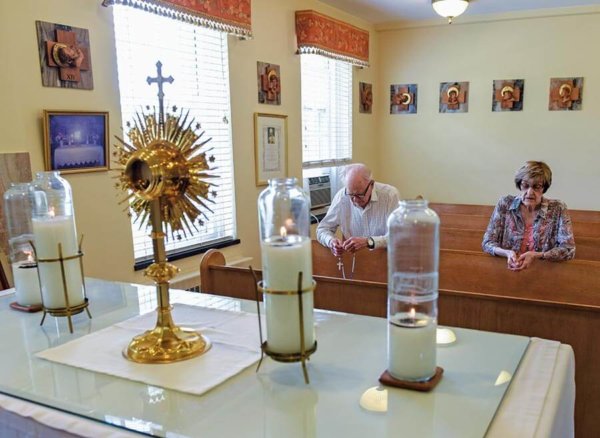 A while back, I wrote about the power of the Eucharist to transform our lives. It is the source and summit of our faith and the most intimate way Christ has given us to commune with Him. I closed that piece with a mention of the practice of eucharistic adoration, a thread I’d like to follow a bit further here.

The Mass is such a complete form of worship one might wonder why we should take the time for eucharistic adoration when we already consume the Blessed Sacrament on a regular basis. In John 6:53-55, Christ said to the disciples, “Those who eat my flesh and drink my blood have eternal life, and I will raise them up on the last day; for my flesh is true food and my blood is true drink.”

This is certainly one of the most challenging statements made by Jesus in the Gospels, and it created division within the ranks of his followers, with some leaving due to their inability to accept the teaching. While this passage points to the paramount importance of consuming the Eucharist at Mass, it also highlights the reality of the real physical presence of Jesus in the Sacred Host, which is the first indication of its worthiness for veneration.

When Jesus turned to the twelve to ask if they would leave as well, Simon Peter said, “Lord, to whom can we go? You have the words of eternal life.” (John 6:68) They could not possibly have understood at this point what Christ meant by this mystery that would only be revealed during his Passion. And this is another reason to be drawn into adoration, because it places us in the position of the Apostles, who grappled over the mystery of the Eucharist as it slowly unfolded before their eyes.

So we see that in the Eucharist, Christ intends to draw us into contemplation of the mystery of God. Archbishop Fulton Sheen once said, “When I stand up to talk, people listen to me; they will follow what I have to say. Is it any power of mine? Of course not. St. Paul says, ‘What have you that you have not received and you who have received, why do you glory as if you had not?’ But the secret of my power is that I have never in fifty-five years missed spending an hour in the presence of our Lord in the Blessed Sacrament. That’s where the power comes from. That’s where sermons are born. That’s where every good thought is conceived.”

It is impossible to perfectly define what each person will gain from time spent in prayer before the Blessed Sacrament, because it is a mystery that we have been invited to enter into. But to provide at least some glimpse of what God wishes to reveal to us through the practice of adoration, it has something to do with his sacrifice for each and every one of us. That sacrifice is so immense, it’s one we could never fully grasp; but taking the time to reverence Christ’s presence in the Eucharist will open the door to a relationship with God that we will never want to close again in our lives.

Ultimately, adoration opens our hearts to the reality of Christ’s love, empowering us to return to our everyday lives and relationships inspired to follow in his footsteps by making sacrifices and being willing to do what is right for the sake of others.

Father Dougherty is a member of the Christophers' board of directors.