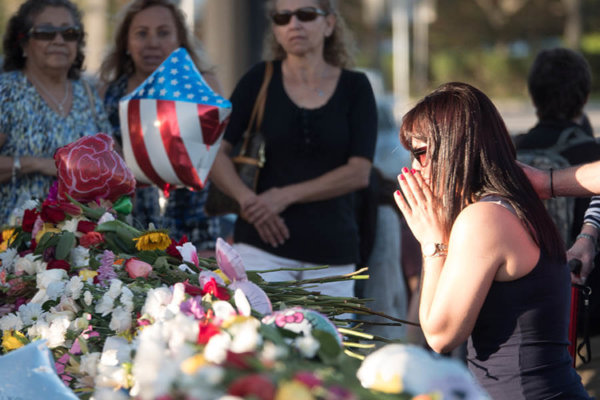 A woman prays at a memorial where well-wishers placed mementos as hundreds of students and parents arrive for campus orientation Feb. 25 at Marjory Stoneman Douglas High School in Parkland, Fla. Attendance at the orientation was voluntary but it was being held in anticipation of the school officially reopening Feb. 28. (CNS photo/Angel Valentin, Reuters)

“Mommy there’s a shooter I love you”

That was the text I sent my mother April 1, 2014, while I was a second-semester freshman in a management class at Stevenson University. I had been listening to a lecture in my university’s school of business when the PowerPoint screen went blank and flashed a notice for students and staff to shelter in place. An active shooter was on campus.

At first, we thought it was a joke – after all, it was April Fool’s Day. Seconds later, our cell phones buzzed with the text alert, solidifying the first message.

My mom left our home in a hurry when she got my text, driving so fast from our home 20 minutes away that she beat many of the first responders.

My sister kept me updated with what the television news was showing, including an overview of the building that the shooter was in – the same one where I sat at that moment on the fourth floor. I told her to always tell my year-old nephew I loved him.

The boy sitting next to me put his arm around my shoulders; I hadn’t noticed that I had silently started to cry.

I would lie if I said that I know how long it took for our door to be pushed in by the SWAT team, or that I remember descending four flights of stairs to the building’s exit. My memory picks up when I burst out onto the parking lot, into a path outlined by SWAT team members yelling at me to run to the campus’ community center.

Thankfully, it was a false alarm – two students hunting in the woods near campus. They were spotted with their BB guns, school security was notified and it triggered the appropriate response.

Most people do not understand that for those few hours, the threat was very real. For our parents, for our professors, for us.

In a split second, the place that we called home could have become one in a list of many: Sandy Hook, Oklahoma City, Columbine, the World Trade Center, the Boston Marathon and now Parkland. It only takes one person with malicious intent to uproot and destroy lives.

I will forever be grateful that we did not become a statistic that day. I pray for those affected by tragic events, with a little bit more of an understanding than the general public.

It was only once we were in the windowless hallways of the community center, the building’s perimeter guarded by the SWAT team, that we began to feel more secure. I found a spot, dropped my book bag (in a split-second decision I wore it as I evacuated, as a possible guard against bullets) and sank to the floor against a wall.

I started to pray.

When I looked back up, I noticed a girl sitting across from me, watching. She asked if praying made me feel better. I said that it did.

We were obviously not of each other’s social groups. In any other circumstances, we likely would not have been friends; but, today was different.

She told me that she was agnostic, and I shared my Catholic faith with her. She asked me to include her when I prayed today, and of course I agreed.

We spent the rest of the early evening talking and sharing. About faith, our hopes and dreams, and our futures, which were looking more secure as we began to hear news that it was a false alarm.

When we were released, after what seemed like an eternity, we said goodbye and went our separate ways. I went with countless others to the bottom of the hill at our campus’ entrance, avoiding the mob of media and into the arms of the parents who awaited us with tears and unbridled joy.

Though we never spoke again, I would often see the girl around our small campus. We would acknowledge each other with a smile, knowing that we were bonded by our almost-tragic day.