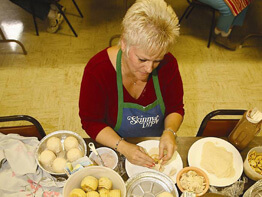 HANCOCK – In an assembly line that would make Henry Ford proud, dozens of volunteers from St. Peter in Hancock transformed their parish hall into an apple dumpling factory Sept. 12-14 – filling the air with the delightfully dense aroma of sweet cinnamon and fresh-baked apples that attracted visitors from near and far.

And while car manufacturers rely on mechanization to produce their goods, there was no hint of modernity at St. Peter’s culinary workshop as workers lovingly crafted each perfectly shaped dumpling completely by hand.

Some parishioners studiously cranked small metal machines to peel and core 45 bushels of Yellow Delicious apples plucked fresh from an orchard in nearby Berkley Spring, West Virginia. Others mixed flour into dough that was pressed out on tables with rolling pins. Still others boiled syrup made of sugar, cinnamon and margarine that gives St. Peter’s sweet treasures their one-of-a-kind flavor.

As she carefully placed an apple onto a rolled piece of dough and dropped some apple pieces in its cored center, Margaret Mann explained that the well-guarded dumpling recipe came from the grandmother of Hazel Souders, a fellow parishioner.
On the day that just happened to be the Feast of the Exaltation of the Cross, Ms. Mann said she and her fellow parishioners roll the dough in the sign of the cross – something other dumpling aficionados don’t do.

Beyond its spiritual significance, “it makes them easier to wrap,” said Ms. Mann, president of the Ladies of St. Peter and St. Patrick, the group that has coordinated the massive baking effort for more than 30 years. St. Patrick is a small mission church in Little Orleans affiliated with St. Peter.

“Not as much dough goes to waste when it’s in a cross shape,” she said.

Nothing, in fact, goes to waste. Excess dough is used to make small cinnamon swirls and every speck of the apples is saved. When asked how the apple skins are recycled, Ms. Mann laughed and looked at Father John Lesnick, pastor of St. Peter and St. Patrick.

“What Father doesn’t eat, I take home and feed to the cows and make apple jelly,” she said.

Ms. Mann said parishioners resist the strong temptation to eat their popular pastries as they make them. Only if the occasional dumpling-filled pan is dropped will they feast on the treats at the production center.

“We don’t want to eat up our profits,” she said with a smile.

Father Lesnick said the apple dumpling sale is his parish’s biggest fundraiser. This year, more than 5,200 of the treats were made and sold during Hancock’s Canal Apple Days over the weekend – with hundreds of visitors filing in and out of the parish kitchen to claim their culinary prizes. Thousands more will be sold during the upcoming Apple Butter Festival in Berkely Spring, Oct. 6-7. The dumplings sell for $8-10 per package.

Because there wasn’t a lot of rain this summer, the apples are slightly smaller than previous years, Father Lesnick said. But there is clearly no difference in taste.

“It’s a good community builder,” said Father Lesnick, noting that some families use vacation time to help on the project and a few families involve three generations. Nestled in the foothills of the Appalachian Mountains near the Potomac River, St. Peter and St. Patrick is a small faith community made up of 195 registered families.

Only a few days before they started their dumpling production, new ovens were installed that helped speed up the process. Because they were bigger, more dumplings could be baked at one time and they browned more evenly. There is a unique process to the baking, which the pastor started to explain before a parishioner cut him off.

“Now don’t give away our secret,” the parishioner scolded with a smile. Fellow parishioners broke out laughing. Then it was back to work.