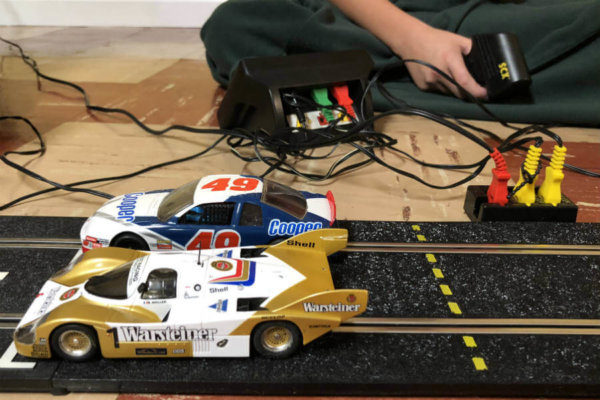 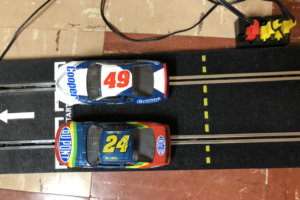 The other day my phone rang, and I saw that it was my father. It was a rainy day, he was making a round-trip to New York that day (that’s not as unusual as it sounds), and he had left a few boxes of slot cars and track at his house for us to pick up. Maybe the boys would have some fun with them, he said.

I mentioned it to the boys, and they were so excited. We went and picked up the boxes after I promised their father that he would get to help set them up. In the end, though, it was the younger half of the family that carefully designed the track and set the cars loose for their first races.

It is so much fun. I think if we had them set up in the living room, no one would ever want to do anything else. The cars fly around the track, and it’s not clear which one will win. Our sons have built a couple different tracks to use, and they have had a blast. 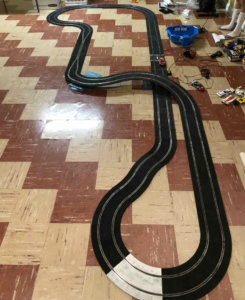 They’re so much fun that I suggested we could get rid of the video games and just race the slot cars. No one else seemed to think that was a great idea. But we are having a fantastic time with the slot cars.

Studying for spelling tests is not as much fun as racing slot cars. But otherwise homework is happening mostly on autopilot, thanks to our afterschool sitter, so I really can’t complain.

We have the best afterschool sitter. Our original plans for a sitter fell through on Labor Day weekend, and I was in a bit of a panic.

Somehow the pieces fell into place, and we ended up in this totally enviable situation. Our boys are happy, our sitter seems happy, we’re thrilled, and the homework gets done.

And the boys have learned how to play gin, which is an added bonus. 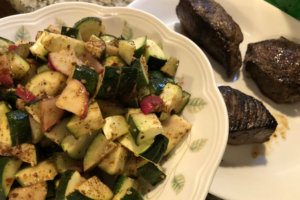 When I was cooking dinner last night, the smoke detector went off. I ran to yank it off the wall and stop the beeping.

Our boys seemed a little concerned, so I said, “It’s not a good dinner unless the smoke detector goes off.”

“That can’t be true,” one of them said, “because you make good dinners.”

I was on cloud nine as I stirred the vegetables and sliced the meat. Then I put dinner on the table, and all my younger diners would eat was plain rice. But, for the record, two of us thought it was a good dinner, and we confirmed that the smoke detector works.

I have been trying to be more realistic about what I can achieve in a day at the office, so I often find myself saying, “Yes, I can definitely do that, but it won’t be today.” One day this week it suddenly occurred to me that “It won’t be today” was becoming my catchphrase, and maybe even the title of my biography. If I am ever worthy of a biography, I hope my biographer or I can come up with a more uplifting title.

But it won’t be today. 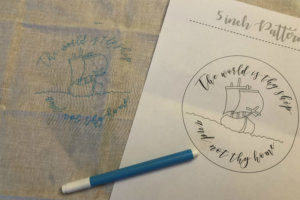 We are making slow progress on our embroidery project, but it’s underway! Leo helped me trace the pattern using a tracing pen my friend Theresa recommended. Now we just need to put it on the hoop and jump in!

I thought this would be our week to do the stitching, but it ended up being a busy week, so I’m hoping to get it started this weekend.

If you want to start too, you can visit Theresa’s site to get the pattern.

My father came to hang out with our boys while we went to back to school night earlier this week. The boys and their grandfather ate hamburgers and played video games the whole time. You can’t really top that for an evening, at least from the kids’ perspective. Hopefully Grandpa enjoyed it, too.

At back to school night, I kept thinking that what our children are learning in school is amazing. The science and social studies and math and writing all sounds like much more than I ever did in elementary school.

Our fifth grader is writing for 15-20 minutes every night, which sounds like so much fun to me. I have a feeling it’s not as much fun when you’re in fifth grade. 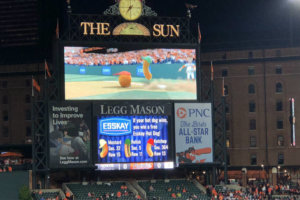 Daniel and I had the chance to go to our last Orioles game of the season last weekend, and we had such fun. The weather was perfect, the sky at sunset was exquisite, and the hot dog race on the Jumbotron kept our attention as it always does.

What is it about the hot dog race? We always stay totally absorbed. The Orioles lost, sadly, and so did relish and mustard.

The next morning at breakfast we talked on and on about the hot dog race—how ketchup is such a hot dog, and how mustard may or may not have cheated. Fifteen or 20 minutes later my husband said, “Did the Orioles win?”

Find more quick takes at Kelly’s blog, This Ain’t the Lyceum, and have a wonderful weekend. Happy Fall!