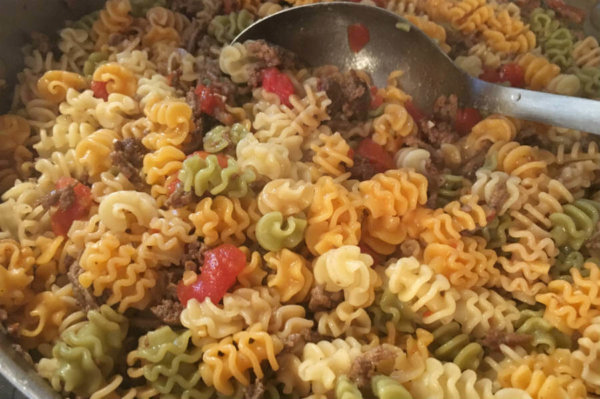 On nights when my husband is working late, our boys and I often eat slops.

My husband never complains that we enjoyed them without him because they are not one of his favorite meals. And the boys are big fans of this decadent dish.

You probably can’t find a recipe for slops online—at least not under that name.

Slops are what my siblings and I called this dish when we were growing up. My father would sauté ground meat with an onion and some vegetables and throw in some noodles. Sometimes he’d add a jar of pasta sauce or cream of mushroom soup. We would shake on some parmesan cheese and—voila!—there were the slops.

As I recall, we named them slops because Wilbur ate slops in Charlotte’s Web—a mix of foods, whatever was in the house, all thrown together and enjoyed. This week is a perfect week for making slops because we are limping along to the weekend grocery-wise. I never got groceries last weekend, and once I’ve made it this far in the week, we should just see how far we can go. It’s a good test for us, a fun challenge, and a reminder that we always have what we need.

So I knew it would be a slops night. This morning as I was driving our sons to school, I said, “Dad’s working late tonight, so we’ll have slops!”

I could tell they were excited. We talked a little about why we call them slops and how pigs eat a mishmash of food thrown into their troughs.

“But Mom,” said our older son, “what do other people call slops?”

I had to admit that I have absolutely no idea.

When I got home from work, I let the boys pick the noodles. All we had was ground beef, so that’s what we used, along with some minced garlic, a can of diced tomatoes, and some beef broth.

Dinner was quickly made and quickly eaten—even though two of the diners complained that the chef had included tomatoes—and not particularly fancy. But everything is fancier when you add parmesan cheese.

What are we having tomorrow night? Well…maybe leftover slops?

I’ll save you a seat at the table.