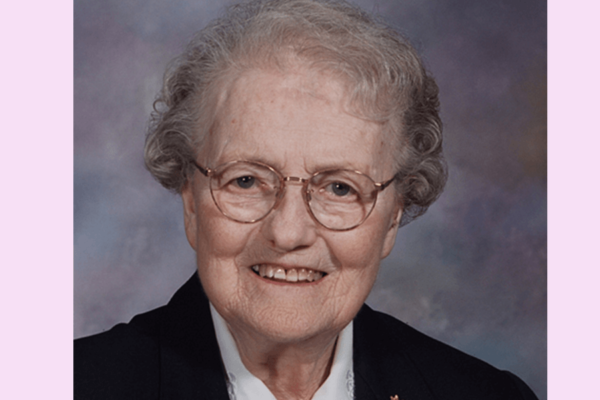 Franciscan Sister Angela Patrice Power turned 100 May 9.  The following was submitted for publication by her religious community.

Sister Angela Patrice Power grew up Kathleen Mary Power in Dungarvan, Waterford, Ireland.  She was the youngest of eight children — four girls and four boys.  One of young Kathleen’s favorite things to do was Irish dance. She competed in many competitions and received many awards.  Growing up in Ireland she was taught by the Mercy Sisters and had four aunts who entered various other religious communities.  Some Sisters of St. Francis lived nearby and when they were home, they visited the Power family. Angela was very fond of the sisters and knew she was called to follow in St. Francis’ footsteps.  She entered the congregation in 1932 at age 16, two years after her sister, Eileen, entered.  Her mother and father thought she was too young and expected her to change her mind, so she was held in Mallow for one year before being sent to the United States.

When she arrived in the states, her sister, Eileen was a novice.  Back in those days, postulants weren’t allowed to speak to novices.

“Since we weren’t allowed to speak to each other, we would sneak off to the tunnel to talk,” Sister Angela remembered. “We were young.  I finished high school at the motherhouse and as soon as I was professed, I began teaching.”

When asked to share a memory of her years of teaching, Sister Angela smiled as she recalled, “I remember it was 1938 and I was teaching a class of 90 first graders at St. Katharine’s. One day I asked a little boy to sit in the front desk and act as ‘principal.’ At the end of the day all the students lined up to leave. I look over and the boy was still sitting there. I asked, ‘Why are you still here?’ to which he replied, ‘You said I would get a prize.’ I didn’t have anything to give him so I gave him an old medal I had.”

Sister Angela first returned to Ireland in 1949, 13 years after entering the congregation.

“It was wonderful to see my family again after so many years,” she said.

While in Ireland, she ministered at Immaculata Convent in Mallow, County Cork, helping young women who wished to enter the congregation prepare.  “Some of the novices I helped to enter now live here at Assisi House with me.  I never imagined I’d be living with those I helped so many years ago,” she remarked.  “Sister Sheila Byrne is one of them.  I call them all my grandchildren.”

In 1979, she got a call from her brother, a priest who needed help.  He was transferred to a small parish on Shelter Island in New York and was by himself.  Sister Angela went to lend a hand.  She served one year as his housekeeper and cook but also began a religious education program for the children in the parish.

When she returned to the motherhouse, she was asked to take over the roll as administrator of Assisi House for six years.  After that she served for 12 ½ years at St. Joseph Parish in Aston, Pennsylvania. While serving in parish ministry at St. Joseph’s, Sister Angela took up the task of collecting pennies to help build the church.

“I looked on the ground at gas stations, I asked for donations, and I put containers in restaurants,” she said. “When all was said and done, I brought $10,500 in change to the church.”

In 2005, Sister Angela was honored by St. Joseph Parish for her many contributions to the life of the parish and for collecting the money for the new church.

When asked about how she felt about turning 100 and celebrating her 80th year as a sister, Sister Angela responded, “I always said I didn’t want to live to 100. I was and am ready to go to God anytime he is ready. I guess he’s just not ready yet.”

She believes the key to her longevity is eating properly and keeping moving.

“I am very independent,” she said. “I don’t sit still.  Even now I get up and walk as much as possible.”

She is grateful to have her mind and her wits about her and says overall her body is keeping up nicely for 100.

“I am grateful for the life I have had,” Sister Angela said. “I would do it all over again. Living in community is very special.  It is wonderful to have a place to pray together.”

Although she never lived with her sister, Sister Eileen Power, during her years of ministry, they did live across the hall from each other in Assisi House for a couple years before Sister Eileen died.

“It was great to be so close for the time we had,” she said. “The whole thing is to love God and to remain close to the Blessed Mother.  Anything I ask, she is always there to help.”