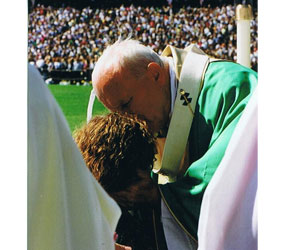 Pope John Paul II kisses then 8-year-old Brigid McDonnell on the forehead during the sign of peace during an Oct. 8

Jim and Pat McDonnell spent less than a minute in the presence of Pope John Paul II, but it was enough to change their lives.

The longtime parishioners of Our Lady of Victory in Arbutus had recently lost their son, Ryan, when he was struck and killed by two cars while riding his bicycle.

Selected to offer the sign of peace to the pope during his Oct. 8, 1995 Mass at Oriole Park at Camden Yards, the McDonnells accompanied their two other children, 14-year-old Sean and 8-year-old Brigid, in approaching the Polish pontiff.

As 60,000 people looked on, the pope kissed Brigid on the head and embraced her brother, mother and father. He extended heartfelt condolences to Jim McDonnell for the death of his son.

“When I touched him and looked into his eyes, it was just like looking into the eyes of Jesus,” Pat McDonnell remembered, her voice choking with emotion. “After having that experience with him, I felt like our family could get through anything.”

Pope John Paul II’s historic 10-hour visit included stops at the Basilica of the National Shrine of the Assumption of the Blessed Virgin Mary, Our Daily Bread soup kitchen, the Cathedral of Mary Our Queen and St. Mary’s Seminary and University.

Nearly 16 years later, those who met the pope believe his presence profoundly touched the hearts Catholics and non-Catholics alike.

“Baltimore is a different place because the pope was here,” said Theresa G. Wiseman, who took a leave of absence from her communications position at Mount de Sales Academy in Catonsville to work fulltime assisting the planning team that coordinated the papal visit. Wiseman was responsible for helping local, national and international media cover the event.

Attending the departure ceremony at what was then BWI Airport, Wiseman was introduced to the pope by Cardinal William H. Keeler, who explained her media role to the pope.

Cathy Sitzwohl, who worked on the team that prepared for the papal visit, also greeted the pope at the airport. She genuflected in front of him, but had difficulty getting back on her feet.

“In his frail condition, he held his hands under mine and helped me up,” remembered the parishioner of St. John the Evangelist in Severna Park.

“We selected people we thought would be comfortable, but the reality was everybody froze,” he said. “Nobody knew what to say. The cardinal had a wonderful moment of hosting the group when he spearheaded the conversation by asking the pope a question. The families would ask the cardinal a question, who would then address the Holy Father.”

It took about 10 minutes before people realized they could talk directly to the pope, Smith said.

For the McDonnells, their relationship with the pope has continued after his 2005 death. Pat McDonnell noted that her marriage was under stress after the death of her son. She firmly believes that the pope interceded for her and renewed her relationship with her husband.

More recently, as she has dealt with an illness, McDonnell prayed to the pope to find the right doctor for treatment. She also asked for his intercession to help raise funds in support of a renovation of her church building. He came through on both occasions, she said.

“I believe that he answers my prayers,” she said. “He’s taken my son up in heaven under his wing. I believe they are both interceding for us.”

The McDonnells will be up early on the morning of May 1 to watch Pope John Paul’s beatification on television.

“We will watch that and not the royal wedding,” said Jim McDonnell, Our Lady of Victory’s parish manager. “How many of us have met a saint?”

Pat McDonnell said the beatification date is yet another sign that that the pope is watching out for her. It’s her birthday.

“I met the greatest man in the world,” she said.

Jennifer Williams contributed to this story.