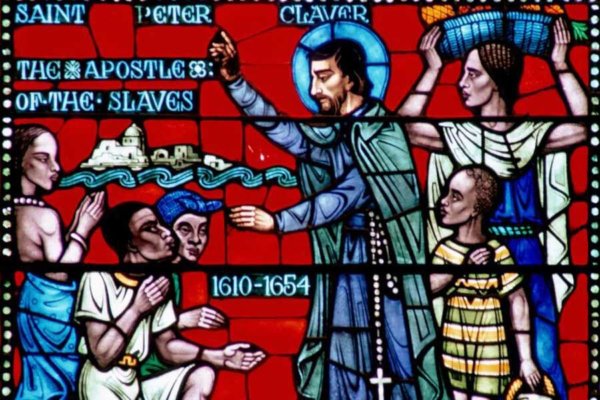 One of the greatest heroes of the social justice wing of the Church is, quite rightly, the seventeenth century “slave of the slaves,” St. Peter Claver. Born in Barcelona, Claver joined the Society of Jesus and was known, even as a young man, as a person of deep intelligence and piety. Spurred by what he took to be the direct prompting of the Holy Spirit, the young Spaniard volunteered to work among the poor in what was then known as “New Spain.” Arriving in Cartagena, he saw the unspeakable degradation of the captives brought in chains by ship from Africa, and he resolved to dedicate his life to serving them.

We have a wonderful letter that Peter Claver wrote to his Jesuit superior in which he vividly describes apostolic work that he did among the slaves, just after they came ashore in Cartagena. He speaks of hopeless people staggering off the ships, stark naked, starving, and disoriented. Many were so sick that they were barely able to stand. Peter and his colleagues brought them fruits and water, and then, he tells us, they contrived to build a crude shelter, using their own coats and cloaks. For the dying, they lit a fire and threw aromatic spices onto the flames so that the sufferers might have a bit of comfort and delight before they died. He adds the touching detail that they employed friendly gestures and signs to communicate concern to those with whom they shared no common language: “This is how we spoke to them, not with words but with our hands and our actions.” I cannot imagine any decent person today who wouldn’t understand and deeply sympathize with everything that Peter Claver did on behalf of these poorest of the poor. They would be justified in seeing him as a seventeenth century anticipation of Mother Teresa.

However, as we continue to peruse Claver’s letter, we discover something that many today would find puzzling, even off-putting. Immediately after caring for their physical and psychological needs, the saint commenced to instruct the slaves in the rudiments of the Christian faith. Once the new arrivals demonstrated a fundamental understanding, Claver continues, “we went on to a more extensive instruction, namely, about the one God, who rewards and punishes…We asked them to make an act of contrition…finally…we declared to them the mysteries of the Trinity, the Incarnation, and the Passion.” In other words, just after ministering to their bodies and their troubled minds, he ministered to their souls.

Now don’t get me wrong: I wouldn’t exactly recommend that one move to evangelization quite as quickly as Peter Claver did! And I don’t think it’s either wise or fair to propose the Christian faith to those who are physically weak and psychologically traumatized. Nevertheless, it is eminently clear that the great saint, the slave of the slaves, did not drive a wedge between the Church’s “social justice” ministry and its evangelizing outreach. He most certainly did not think that his care for the marginalized began and ended with attention to their worldly needs. In fact, Peter Claver was proudest of the fact that, in the course of his work with the slaves, he baptized upwards of 300,000.

I bring this up, because I’m concerned that afoot in our society and even in our Church today is the unhappy tendency to separate what the Peter Claver kept very much together. How often we hear some version of this: “Well, it doesn’t really matter what people believe, as long as they are decent and tolerant,” or of this: “Being a Christian finally comes down to helping the poor.” Ideas, doctrines, and dogmas seem to be at best private convictions and at worst sources of division and oppression. But all of this reflects, not the Church’s authentic self-understanding, but the Kantian prejudice that has formed the modern consensus. The massively influential philosopher Immanuel Kant held, of course, that religion is basically resolvable into ethics, that everything else that preoccupy religious people—liturgy, sacraments, prayer, preaching, pious practice, etc.—is all finally about making us morally upright people.

But as Pope Benedict XVI reminded us, the Church has three fundamental and mutually implicative tasks: to care for the poor, to worship God, and to evangelize. Each of these calls out to the other two, and all forms of reductionism in their regard ought to be avoided. Keep in mind, too, that Pope Francis, whom no one could ever accuse of indifference to the physical and psychological suffering of the poor, also speaks of those on the “existential margins,” which is to say, those who are alienated from God and unacquainted with the Gospel. The “field hospital” of the Church—and how vividly that imagine calls to mind Peter Claver’s work—is meant for those who need care in body, mind, and soul.

Therefore, yes to social justice! And yes to evangelizing! And down with Kantian reductionism!