The latest installment of Names and Numbers features schools embracing to the environment, honors for a Baltimore hospital leader, musicians from a local high school and more. 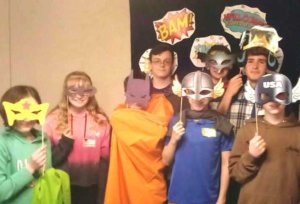 Hours of service donated by volunteers of the Seton Center in Emmitsburg from April 2017 to March 2018.

The Seton Center, which offers support to those who are living at or below the poverty line and offers resources to promote systemic change, celebrated its volunteers April 17 with the annual volunteer appreciation event at Mountain Gate Family Restaurant in Thurmont. A superhero theme, pictured, honored volunteers’ “superpowers” with 60 volunteers and staff in attendance.

Volunteer partners include the Vincentian Marian Youth, comprised of students from Mother Seton School in Emmitsburg, and the new RSVP (Retired Seniors Volunteer Program) collaboration with the Asian American Center in Frederick. 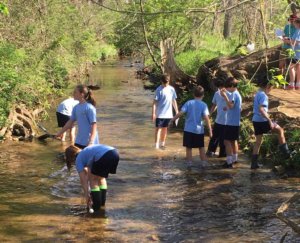 Fourth- and fifth-graders at Immaculate Conception School in Towson who made positive changes to the health of the environment through $5,000 grant from the Chesapeake Bay Trust Fund. The students planted 150 native perennials on campus, reducing parking lot runoff.

The fourth-graders surveyed the local habitat and focused on sustainable energy at their science fair project. The fifth-graders engineered water filters for their project. Both grades assessed the health of Deep Run Stream at Meadowood Regional Park, where fifth-graders are pictured. 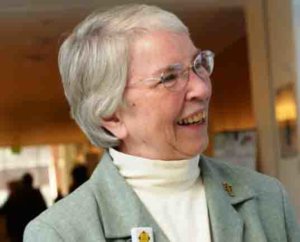 Years Sister of Mercy Helen Amos has served in health care administration and education. The Catholic Business Network of Baltimore (CBNB) announced April 30 that she was the recipient of its 2018 CBNB Catholic Business Leadership Award.

For nearly 20 years, Sister Helen has served as executive chair of the Board of Trustees of Mercy Health Services. From 1992 to 1999, she served as president and chief executive officer.

Sister Helen and her leadership team developed and implemented many Mercy programs, including The Center for Women’s Health & Medicine, “The Woman’s Doctor” program on WBAL-TV and the hospital’s current network of specialty and primary care physicians. Prior to her work at Mercy Hospital, she was president of the Sisters of Mercy of the Union in Silver Spring from 1984-1991.

Sister Helen will be presented with her award at CBNB’s Leadership Breakfast July 27 at the Embassy Suites in Hunt Valley.

Awards won by the music programs at Archbishop Spalding High School in Severn at the WorldStrides Music Festival. In April, 230 Cavaliers traveled to Boston to participate in the competition, which draws participants from across the United States and Canada.

The various ensembles, from vocal to instrumental, were under the direction of Beth Hough, Stephanie Huesgen, Shawn Heming and Bill Sturgis.

One of its six gold awards was earned by the guitar ensemble, under the direction of Heming, which also received the Adjudicator Award, which is chosen by judges and considered one of the most difficult awards to receive. 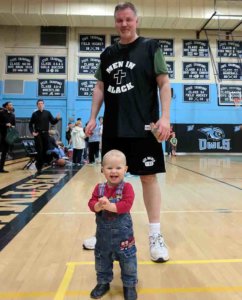 Approximate number of seminarians and priests who took on young men and women in the archdiocesan Men in Black basketball game May 18. The game, hosted by St. John in Westminster at Westminster High School, was a victory for the Men in Black.

The team of seminarians and priests were led by Father Matt Buening, director of the Newman Center at Towson University. Father John Streifel, who was ordained to the priesthood June 23, commended his coaching skills, and said it was one of the most active and exciting games in the Men in Black series, which allows laypeople to get to know clergy in an informal, fun environment.

Pictured is Father Brian Nolan with Michael Seeley, 1, whose family worships at St. John in Westminster.

Years Mother Seton School in Emmitsburg has been a certified Maryland Green School. As one of 618 Green schools in the state, it raises awareness and provides educational opportunities in relation to environmental issues.

Lunchtime composting and a Monarch butterfly waystation are among its environmental initiatives. Seventh-graders participate in Trout in the Classroom, where they raise trout from eggs to fingerlings and then release them into the wild.

In 2009, Mother Seton became the first Catholic school in Frederick County to earn the designation.

Students of St. Louis School in Clarksville’s Einstein Narwhals robotics team who won top honors in a world championship in April. They earned the right to represent Maryland over 400 teams.

The team competed in challenges over four days against more than 100 teams in the FIRST Lego League division, for competitors ages 9-14. Their division presented a real-world challenge, which encourages students to research, design, prototype and test potential solutions.

The Einstein Narwhals won a Judges Award, for their efforts to develop a solution to problems faced by firefighters in cold weather. 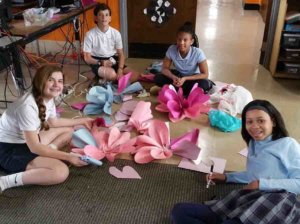 Hours of dancing, games and festivities that parishioners of the combined parishes of St. Agnes in Catonsville and St. William of York in Ten Hills enjoyed at their inaugural Spring Fling April 28.

Father Michael Foppiano, pastor, joined in on the fun, which included square dancing. The Catonsville Senior Center’s troupe joined the parishioners to assist them with the square dancing steps. Students from St. Agnes School made flowers to decorate the hall.

The parishes are in the process of planning another dance as a result of its success.

Students of the Institute of Notre Dame in Baltimore who won awards at the Maryland History Day, a program of Maryland Humanities, competition April 28 at the University of Maryland, Baltimore County (UMBC).

Juniors Grace Birth and Alexis Poindexter won second place for their senior group exhibit, “Conflict and Compromise: The Oslo Accords.” They went on to participate in the National History Day, held June 10-14 at the University of Maryland, College Park.

Emily Rand, also a junior, won the Milton Zaslow Award in Cryptology, which was sponsored by the National Cryptologic Museum Foundation.