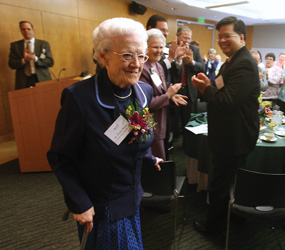 Mercy Sister Paula Marie Phelan always began the first day of class as director of Mercy Medical Center’s School of Medical Technology with an admonition: If students wanted to make it through the session they would have to work hard – very hard.

“I wanted to inspire them to reach their potential,” Sister Paula Marie explained.

Her students took her seriously and went on to become leading medical professionals, many of whom still work at the same hospital where they received their training.

Mercy leaders recognized Sister Paula Marie’s many decades of service to Mercy Medical Center by naming a recently renovated conference room in the pathology department in her honor March 24.

After retiring from the pathology department in 1990, Sister Paula Marie served as convent coordinator for the sisters who live at the hospital.

“I’ve been supported by the warmth and love and kindness and hard work of all the people here at Mercy,” the 90-something sister said with a smile. “I’ve loved every moment.”

Sister Paula Marie said she takes her vow of service seriously and is inspired by a quote she chose to be engraved on her religious ring – “I can do all things in him who strengthens me.”

A plaque that hangs in the conference room in Sister Paula Marie’s honor bears her ring inscription.

Dr. Edgar Alonsozana, chief of Mercy’s pathology department, called Sister Paula Marie a “pioneer” and a leader in the field of medical technology.

“Everywhere I go, I see Sister Paula Marie’s influence on the staff,” said Dr. Alonsozana. “We are who we are only because of those who came before us.”