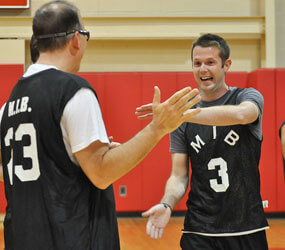 SEVERN – Things didn’t start off very well for the Men in Black.

At the tip-off of an Oct. 22 basketball game pitting the team of seminarians and priests against Anne Arundel County youths from eight parishes, the black-clad players learned immediately that their younger opponents meant business.

As hundreds cheered and clapped, 14-year-old Austin Sym grabbed the ball and drove down the Archbishop Spalding court for an easy lay-up. More points would follow as the youth team sunk several baskets while every ball launched by the seminarians bounced harmlessly off the rims. It was 2:26 into the game before the Men in Black put their first points on the board when seminarian Eamonn Clark sunk a foul shot.

The momentum would soon shift.

The Men in Black came storming back halfway through the game as they seemed to gain more confidence. Led by Mark Dushel, a tall and lanky 19-year old seminarian who would score 19 points, the priests and seminarians had the game firmly under control by the fourth period. With the crowd shouting, “Men in Black! Men in Black!” the team won 43-32 – its biggest margin of victory in the popular annual match up.

“They weren’t pulling any punches,” said Dushel, who caught a flight from Providence College just to play in the game. “They played hard. We were fortunate that we could hold them off at the end. They gave us their best, so we were very lucky to get a win.”

Designed as a way of promoting religious vocations, the Men in Black basketball game was all about fun and awareness.

Revelers enjoyed an outdoor tailgate party before the game. “Sixtus,” a four-member seminarian a capella group from Theological College that includes Baltimore seminarian Jonathan Gibbons, entertained the crowd with lush harmonies. Literature about the priesthood and consecrated life filled a table. Priests and religious were also on hand to answer questions.

Austin, who said it “felt great” to score the first points of the game, has been dreaming of competing in the contest for the last few years. A freshman at Broadneck High School who hopes to make his varsity team, Austin said he respects seminarians and priests for playing the game.

“You see being a priest is not all about church,” said the parishioner of St. Andrew by the Bay in Annapolis. “It’s also about having fun, too.”

Although he hopes to find a career in sports, Austin said he has thought about the priesthood – a fact that delighted his father, Ken Sym.

“I’m so proud of him for even thinking like that,” Ken Sym said. “He’s always been very spiritual and very mature and he loves doing volunteer work, so he has a good heart and that’s one thing I really love of him.”

Nick Sungensis, a 21-year-old seminarian, said he was inspired to become a priest after meeting young priests of the Archdiocese of Baltimore. As a teen, he played basketball with Father Robert Morey at St. Mary in Hagerstown.

“We played with a youth group,” Sungensis said. “He’d always tell jokes and make us laugh. He’d hear our confessions and it really meant a lot to me. If there’s a young boy watching us today, I want to speak loudly to him that there’s happiness and joy in this vocation.”