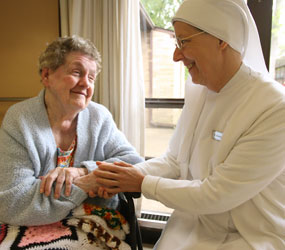 When 87-year-old Alice Jadwigia Armstrong looked up from her hospital bed and saw the smiling face of Sister Lourdes Miranda, she was visibly buoyed by the nun’s presence. Clasping the hand of the Little Sister of the Poor, the white-haired woman seemed transported to the security of her youth.

“I like her because she reminds me of my mother,” Armstrong said with a laugh. “You can depend on her.”

Sister Lourdes, one of 17 Little Sisters who minister at St. Martin’s Home for the Aged in Catonsville, laughed warmly. The Cuba native reached out and tenderly brushed Armstrong’s cheek with the back of her hand. The nun had helped Armstrong deal with the recent death of her daughter. She continues to visit the resident regularly to help her get dressed, receive meals and complete everyday chores.

“It’s such a great privilege to take care of them,” Sister Lourdes said later. “I feel like I’m taking care of Jesus himself.”

The Little Sisters of the Poor have been caring for Maryland’s indigent elderly for 140 years – including four decades at their current location in Baltimore County. They carry on the legacy of Blessed Jeanne Jugan, a Frenchwoman who founded the international religious order in 1839 to minister to the aged.

As they prepare to celebrate the Oct. 11 canonization of Blessed Jeanne in Rome, the local community of Little Sisters remains focused on its mission of treating the elderly with respect and dignity – a living witness to the sanctity of humanity during Respect Life month.

The sun wasn’t yet up on an early Wednesday morning in September when Sister Rosemary Rese and Sister Rosana Dimayuga got in a white van with a lay volunteer and headed to the Jessup Wholesale Market, where restaurateurs and local storekeepers purchase food.

Dressed in impossibly white habits and matching veils, the sisters unloaded dollies and began walking from stall to stall. Inside their pockets, unnoticed by others, were tiny statues of St. Joseph, a special patron of their religious order to whom Blessed Jeanne often sought intercession to find bread for the poor.

“Do you have anything for us today?” Sister Rosemary asked a produce peddler. Without saying a word, the manager disappeared for a moment before returning with two large crates filled with fresh oranges.

“Thank you,” Sister Rosemary said, “and God bless you.”

The rest of the morning followed the same pattern: the sisters asked for food and businesses donated it. The sisters’ van was filled with oranges, bananas, potatoes, cassava, cabbage, onions and more. The food was used to feed the residents of St. Martin’s for the remainder of the week, before the sisters would return to the Jessup market and others like it to ask for more.

“People are very good to us,” said Sister Rosemary, known officially as a “begging sister” of her order. “They know we need food for the people we care for. I think our presence brings a sense of sharing and thinking about others.”

Begging isn’t a one-way street. The sisters are also often called upon to pray for the businessmen who donate to them.

“We pray for their well-being and for the success of their businesses,” said Sister Rosemary, noting that the nuns have a special permit to enter the market. “It’s a mission of evangelization.”

It costs nearly $8 million to run St. Martin’s – about half of which is raised by begging. Carrying on the tradition of their foundress, the sisters also stand with baskets outside parishes, offices and other establishments seeking financial support. It’s a sincere and outward way of relying totally on divine providence, said Sister Rosana, who was born in the Philippines.

“Divine providence is real,” Sister Rosana asserted with confidence. “It’s real – it’s 100 percent real. We always bless the Lord in everything we receive.”

Across the world, the Little Sisters sponsor 202 homes serving 13,232 residents in 32 countries, including more than 30 homes in North America.

Since arriving in Maryland in 1869, the Little Sisters have cared for more than 15,000 elderly men and women. At St. Martin’s Home for the Aged, the Little Sisters serve 80 residents, including some displaced by Hurricane Katrina in 2005. After taking the traditional vows of chastity, poverty and obedience, the Little Sisters of the Poor also profess a fourth vow, of hospitality, for the joyful service of the elderly.

“We believe in the value of the lives of the elderly,” said Sister Dorothy Seymour, who ministers at St. Martin’s. “Every life is precious.”

When residents are near death, the sisters take turns being with them and praying with them. They work hard to prevent anyone from dying alone.

“We hold their hand and stay with them day and night,” Sister Lourdes said. “We assure them they have no need to be fearful. It gives them a great sense of peace.”

Mary T. Lynch, 96, a St. Martin’s resident since last October, said the sisters have a gift of selflessness.

“You couldn’t find a better place,” she said. “They are always there for you.”

Constantina De Shields, an 81-year-old St. Martin’s resident, said she felt loved from the moment she arrived earlier this year.

“I knew I was home,” she said. “No matter what your background is, everyone is accepted. If a sister embraces you, you feel the spirit of love within them. It’s the love of God.”

Editor’s note: Alice Jadwigia Armstrong died after The Catholic Review visited St. Martin’s. Sister Lourdes reported that the Little Sisters were by the elderly woman’s bedside, singing and praying with her and her family.