Fourteen newly ordained permanent deacons recess down the center aisle at the end of their ordination liturgy May 25 at the Cathedral of Mary Our Queen in Homeland. (Kevin J. Parks/CR Staff)

It is no stretch to imagine that the patroness of the Cathedral of Mary Our Queen in Homeland appreciated the scene.

Vicente Perez napped, nursed and played with his mother, Louren, in its Blessed Sacrament Chapel May 25, unaware of the goings-on in the main sanctuary, where Archbishop William E. Lori ordained 14 men to the permanent diaconate for the Archdiocese of Baltimore.

The ordinands included Vicente’s maternal grandfather, José Antonio Rivera-Rivera, who baptized the 7-month-old the next day at St. John the Evangelist in Columbia.

Family from his hometown in Puerto Rico and other happy travelers were among the throng of more than 40 that flanked Deacon Rivera-Rivera and Archbishop Lori for a group photo after a rite of ordination that, other than perennials such as the chrism Mass and high school graduations, attracted one of the larger gatherings the cathedral has seen since the latter’s episcopal ordination in 2012.

Deacon Rivera-Rivera was 10 when he began serving the church as an altar server at Our Lady of Mount Carmel in Rio Grande, east of the Puerto Rican capital of San Juan. His earthly support system begins with his wife of 26 years, Maria, who also grew up there. A job opportunity brought them and their three children – Louren, Alejandra and Giovanni – to Maryland in 2002.

“I love him being a deacon,” Maria said. “Watching him and the others in formation … we’ve had a lot of blessings.”

Deacon Rivera-Rivera was vested by Father Ray Chase, who oversaw his internship at St. Elizabeth Nursing Center, a Catholic Charities of Baltimore facility on its Jenkins Senior Living campus.

“He’s a remarkable man,” Father Chase said. “Gentle is the word that comes to mind, but there is a richness to it. When he’s around someone, José disappears. He worked with people with dementia or Alzheimer’s, and they were all unique individuals to him.”

Deacon Rivera-Rivera was one of three Spanish-speaking ordinands, all with ties to Father Hector Mateus-Ariza, pastor of Resurrection of Our Lord in Laurel. It’s the home parish of Deacon Rivera-Rivera, and the first assignment for Deacon José Rubén Morales, also originally from Puerto Rico. Father Mateus-Ariza vested Deacon Manuel de Jesús Hernandez-Jovel, a native of El Salvador whom he had recruited to the formation program.

“I’m so happy for them,” Father Mateus-Ariza said. “I feel like jumping up and down.” 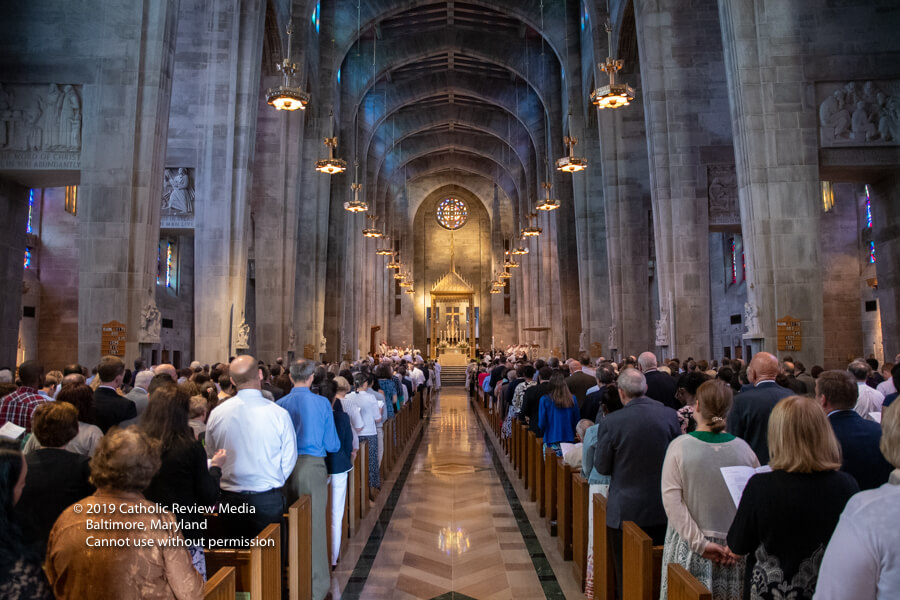 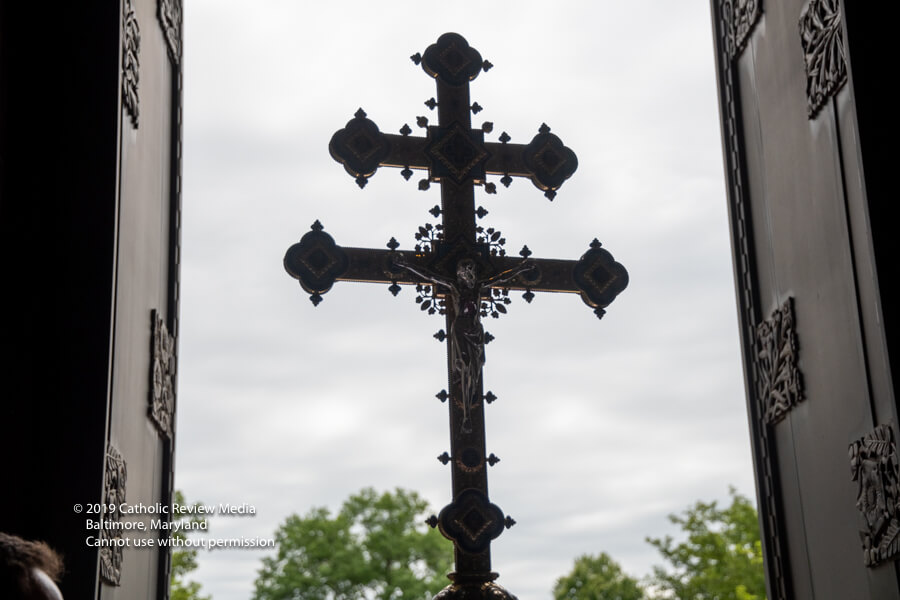 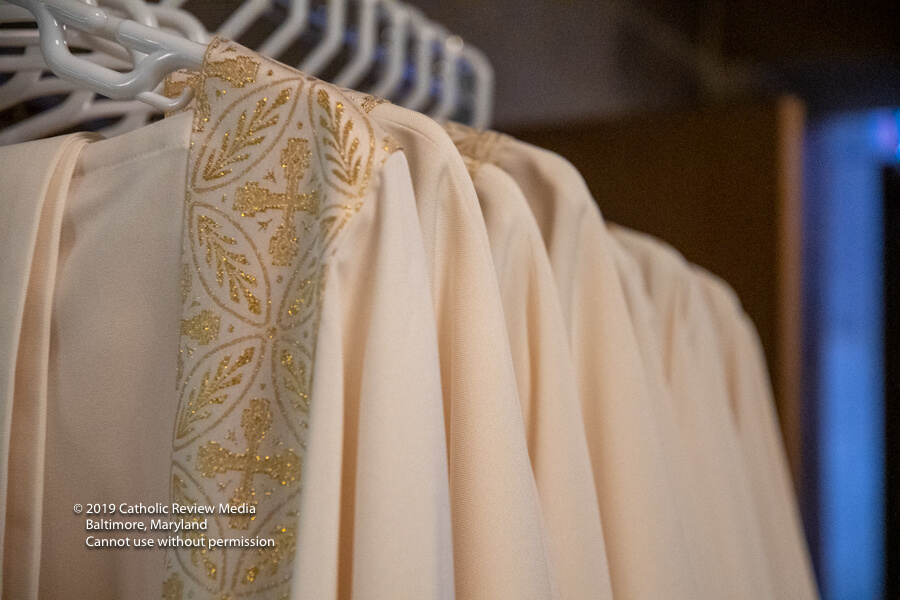 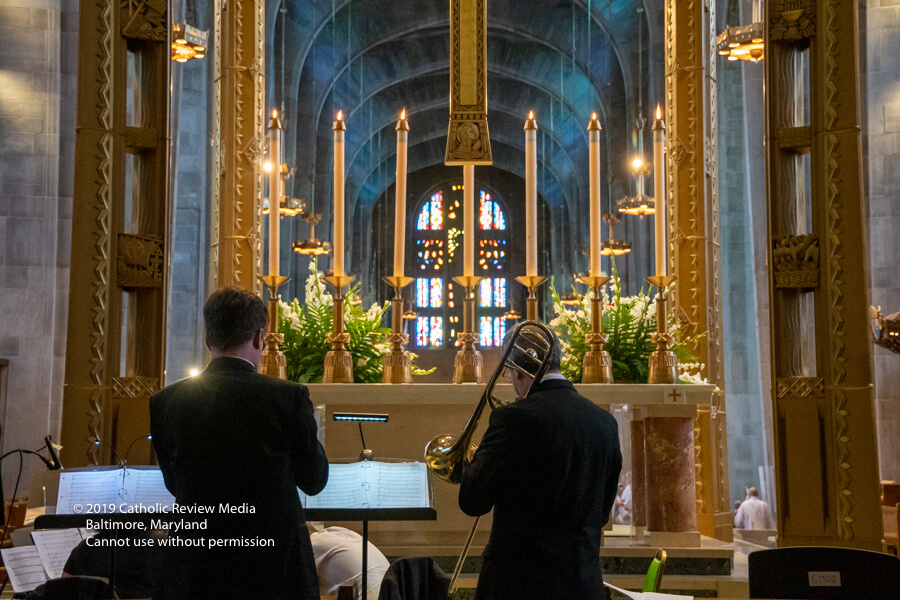 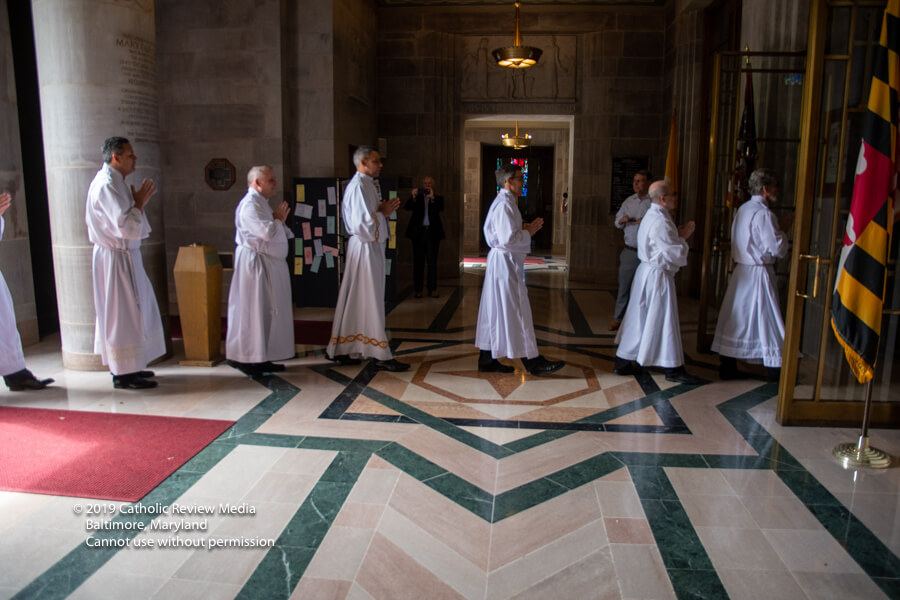 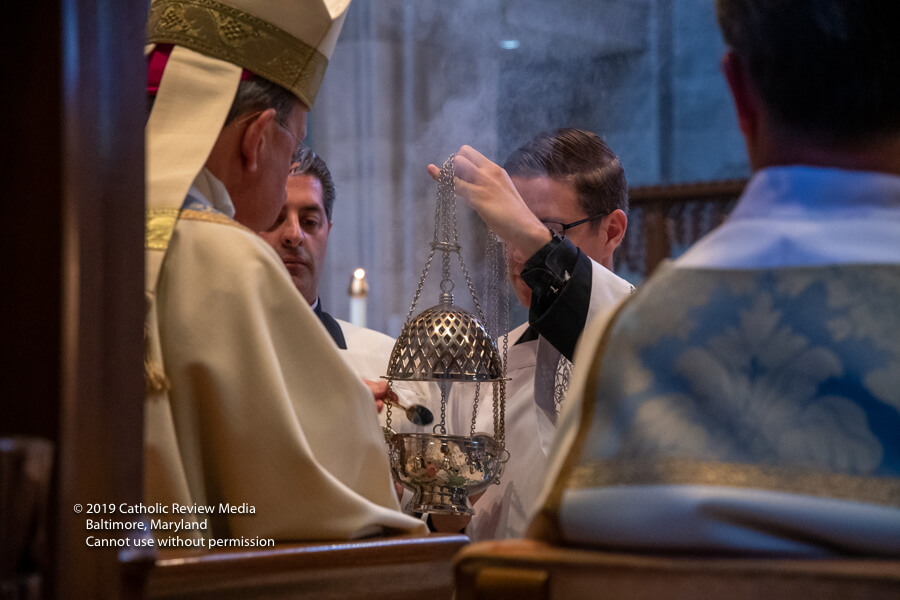 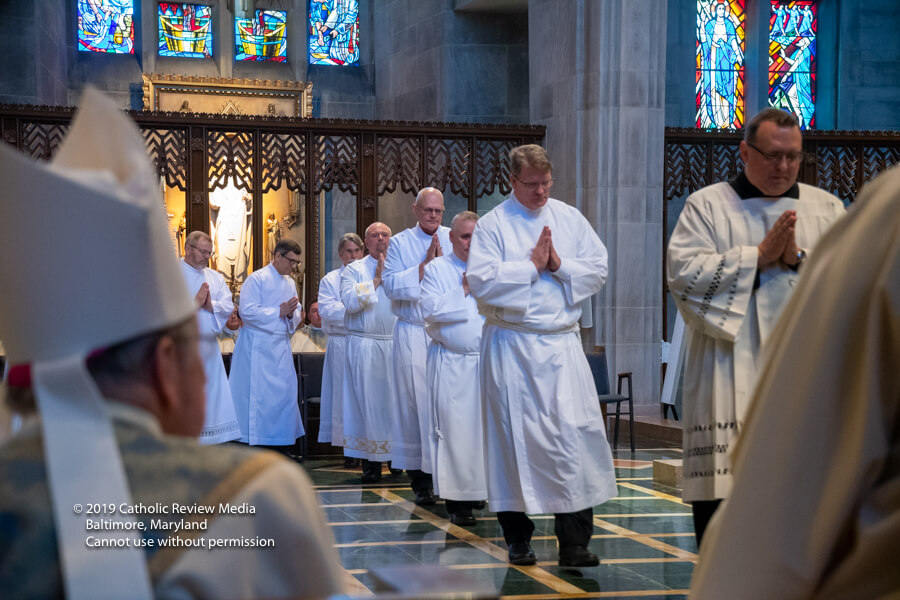 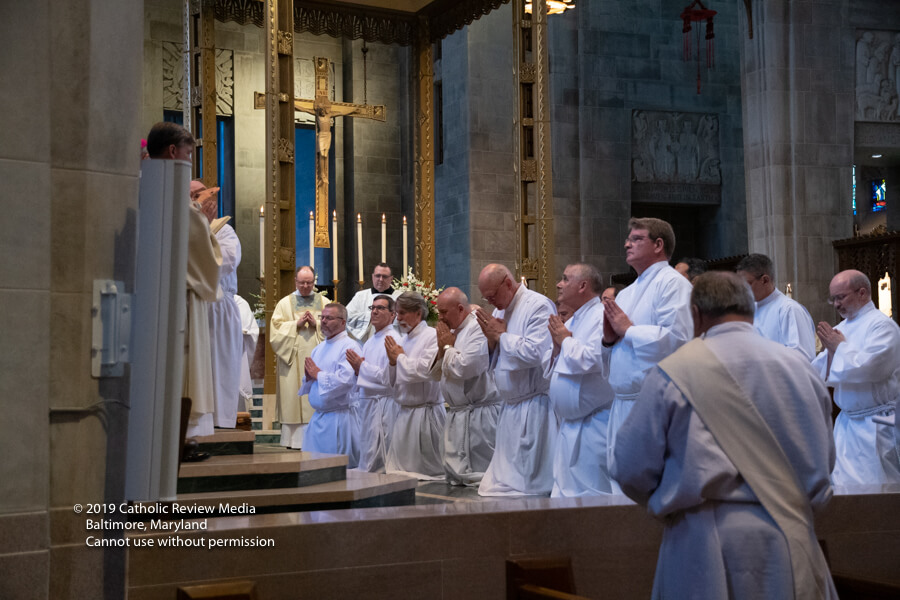 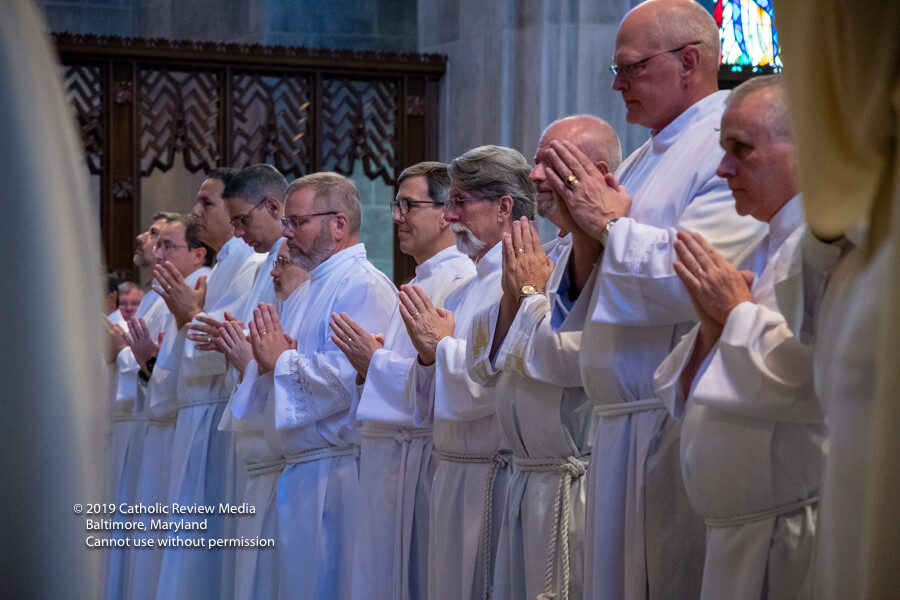 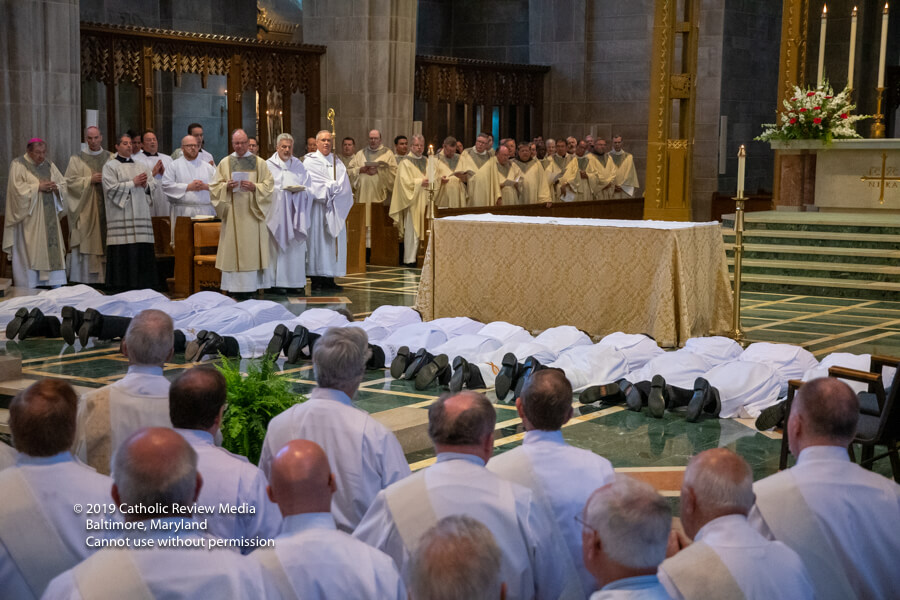 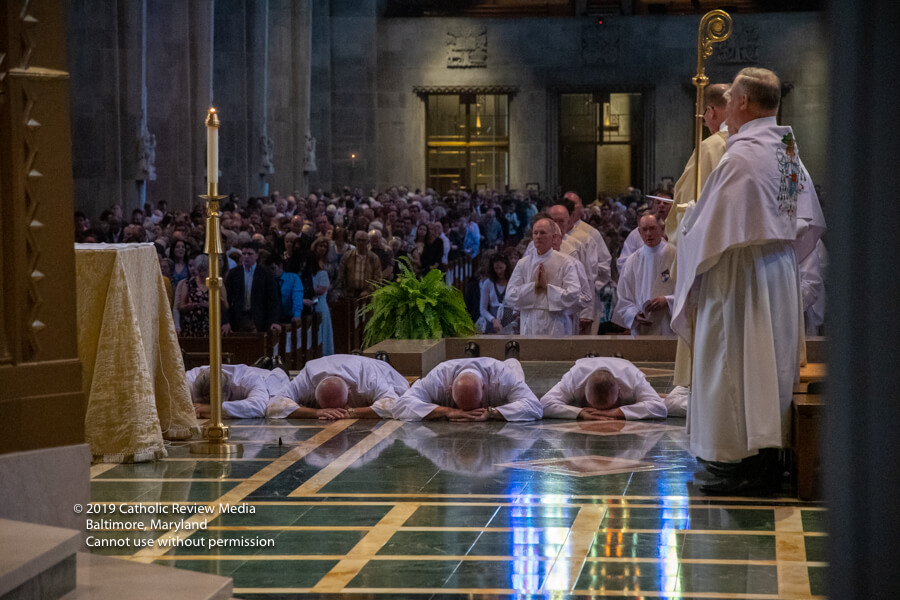 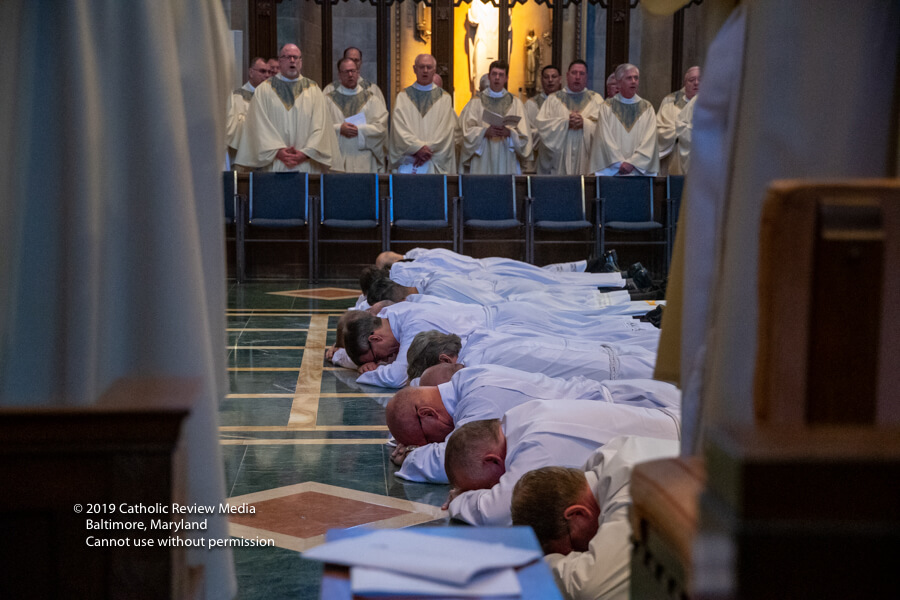 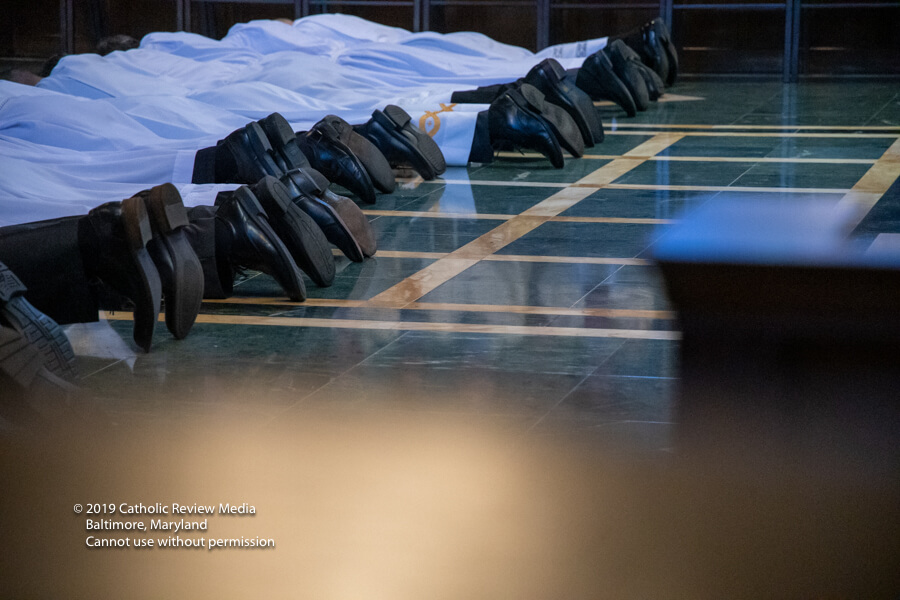 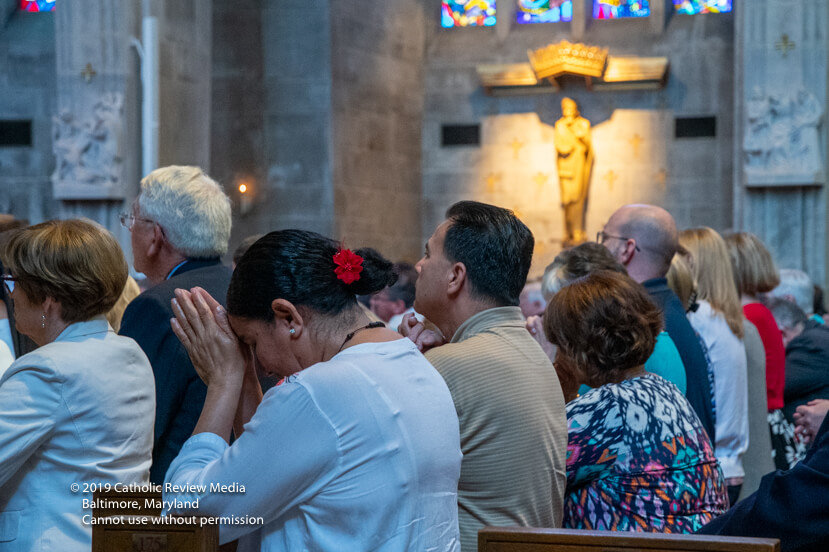 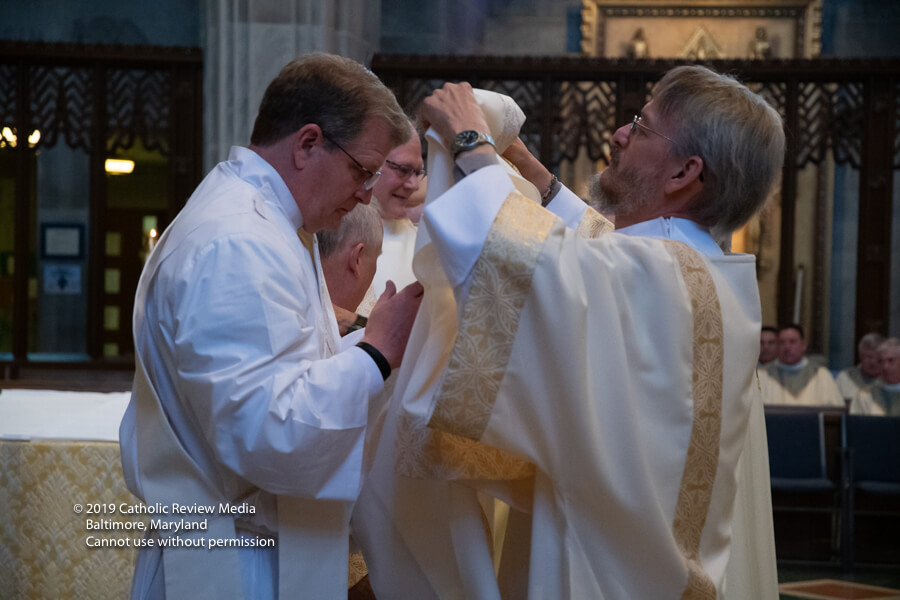 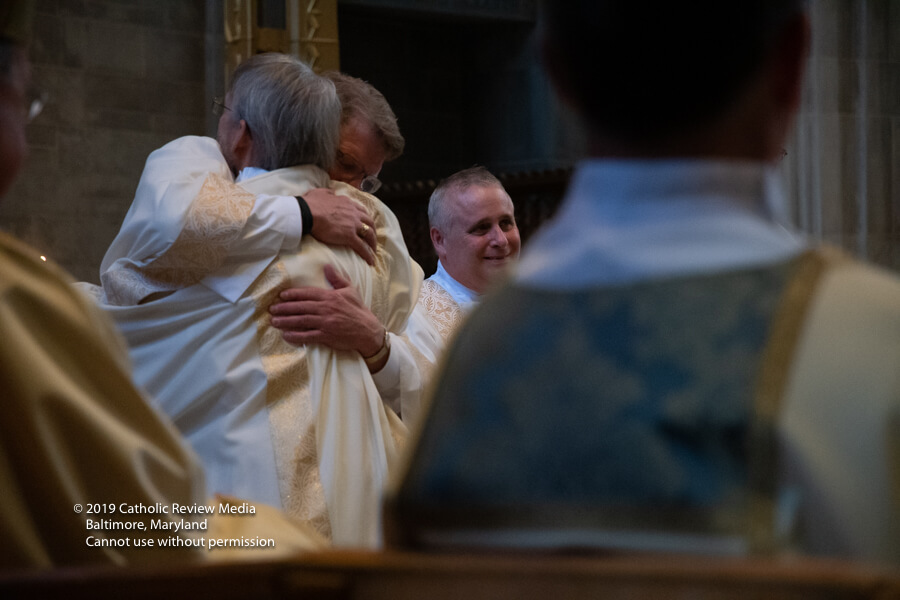 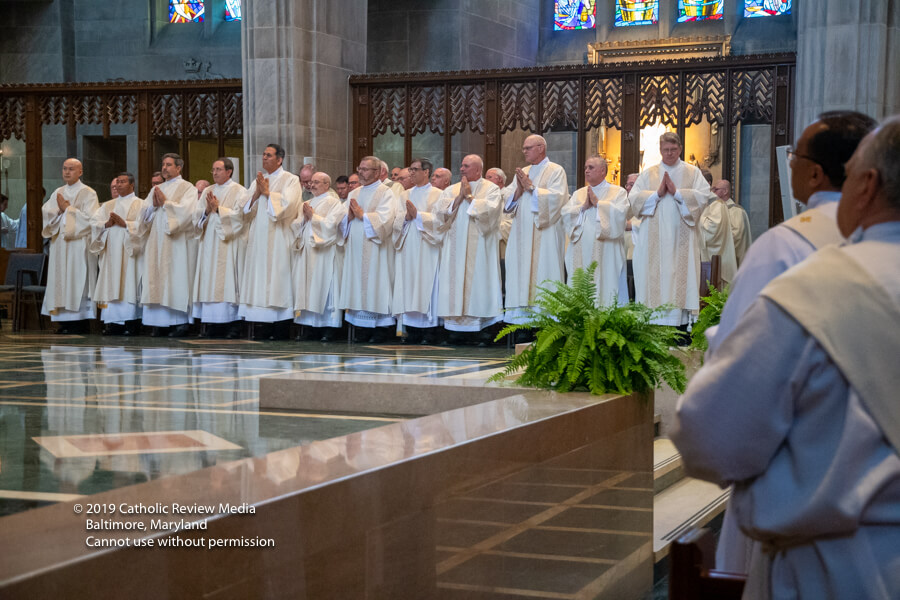 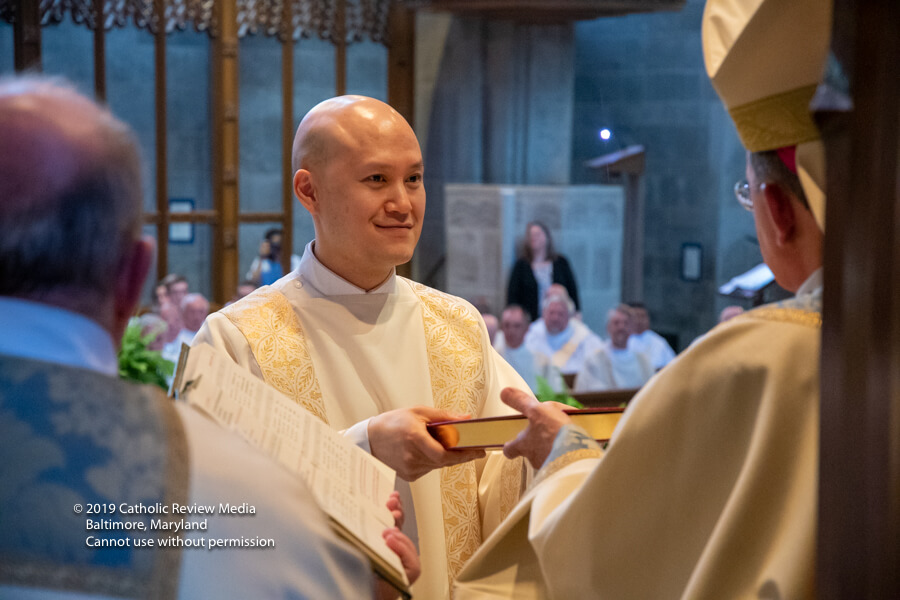 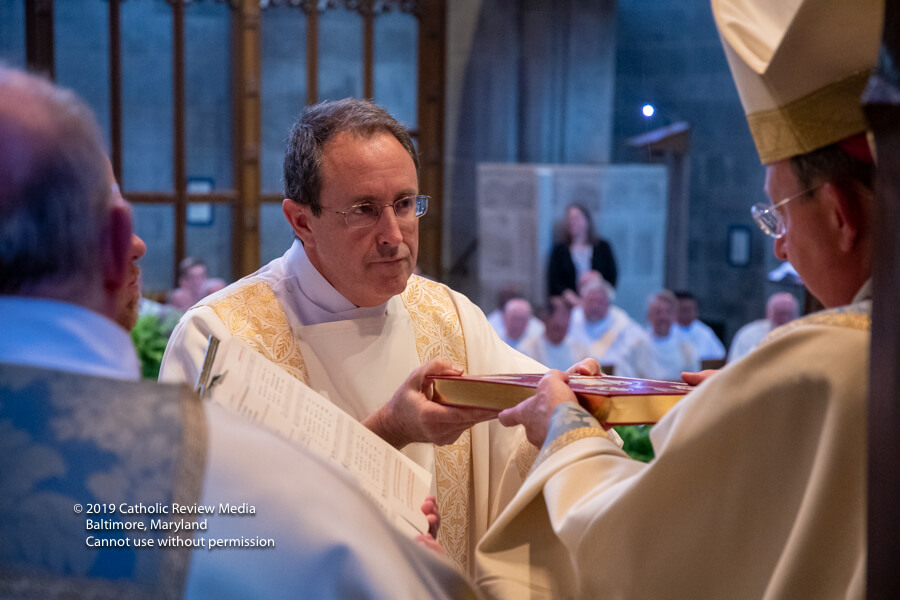 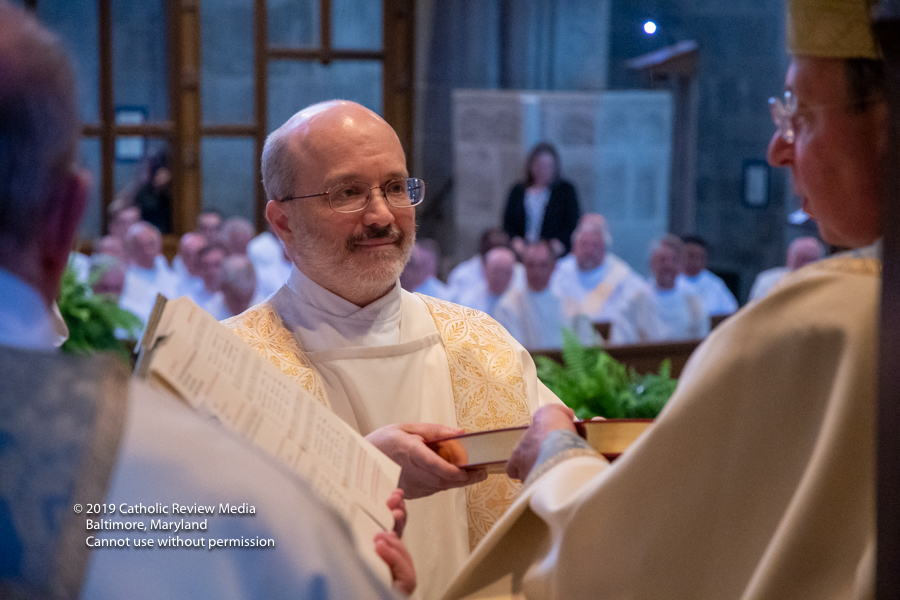 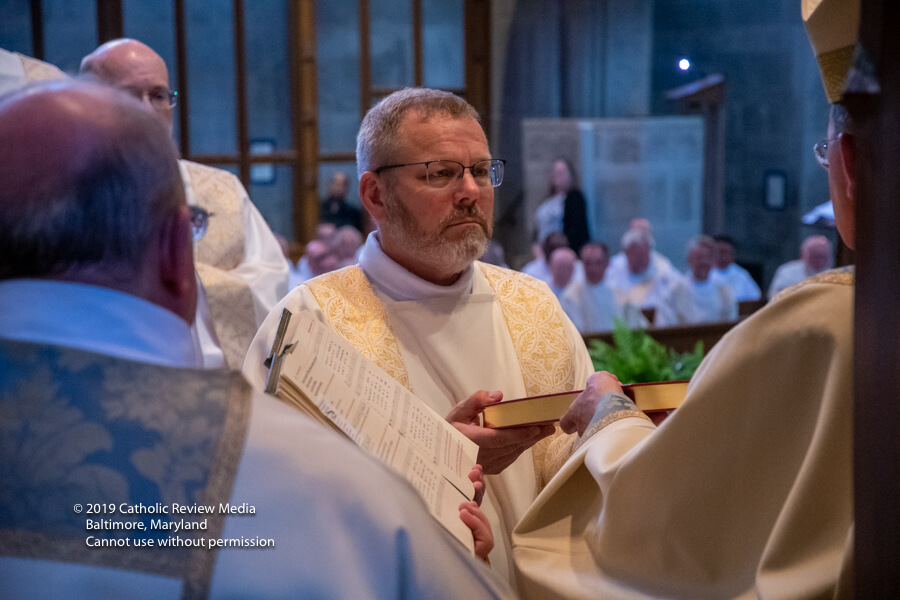 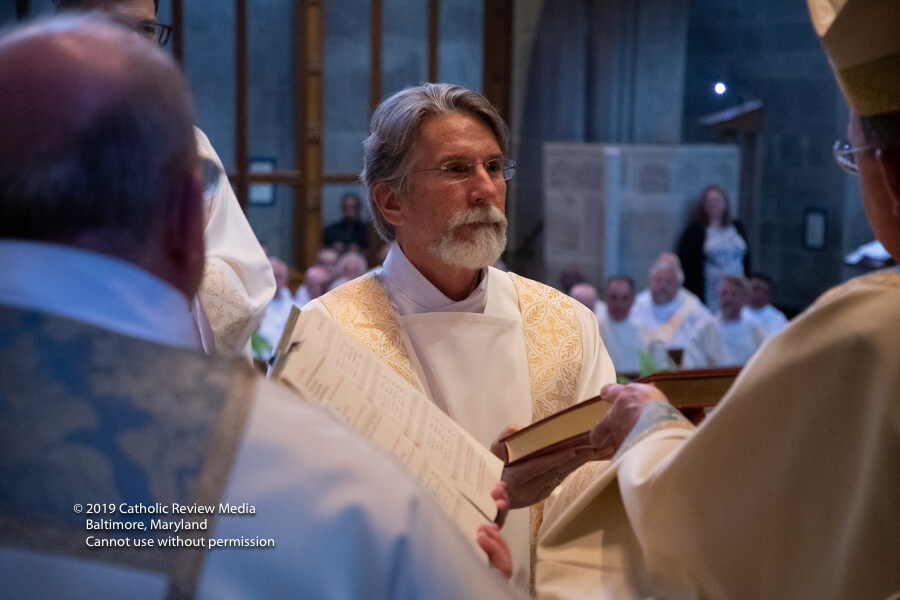 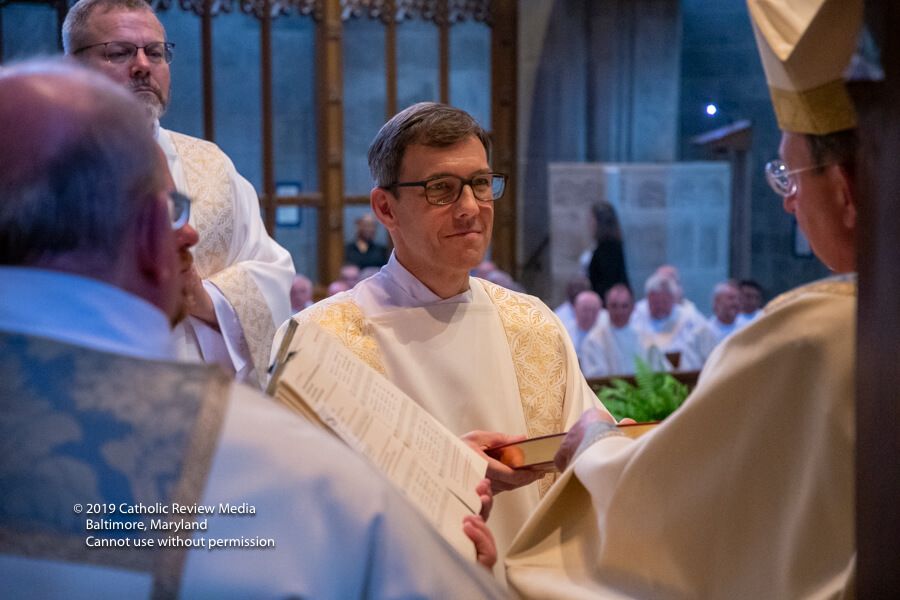 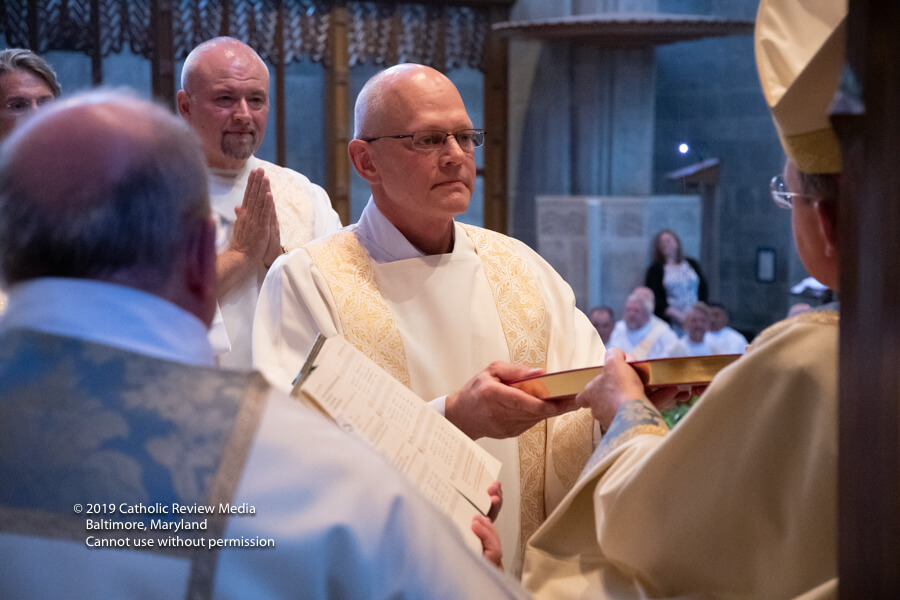 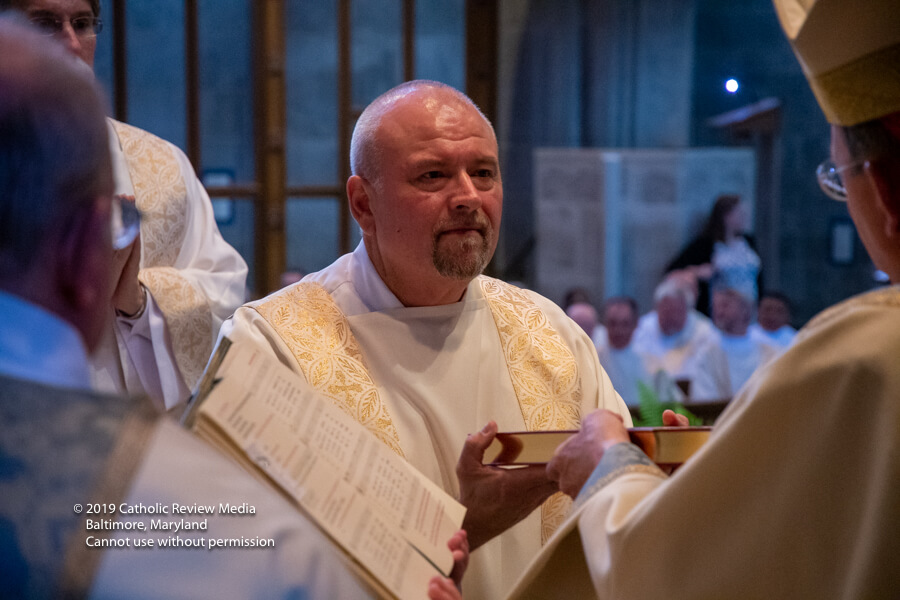 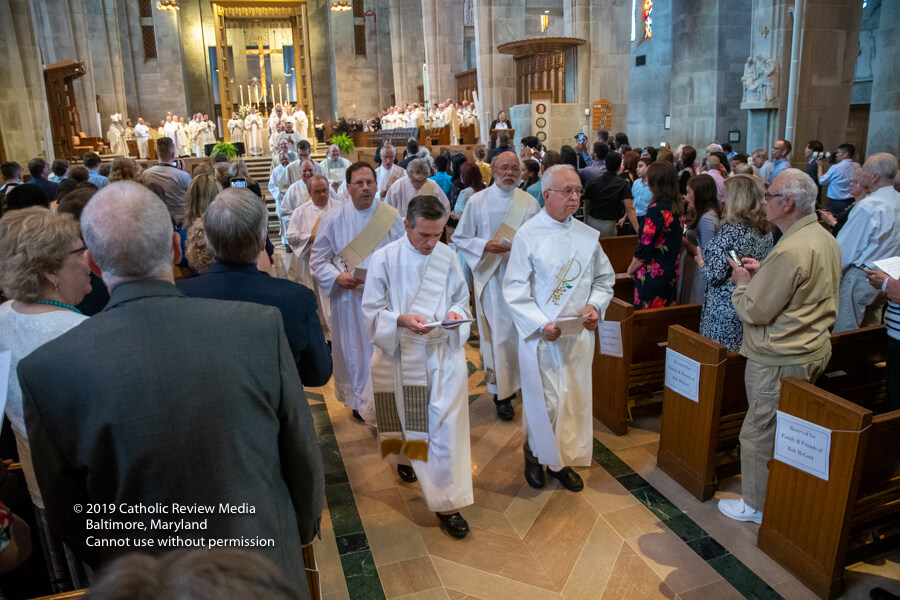 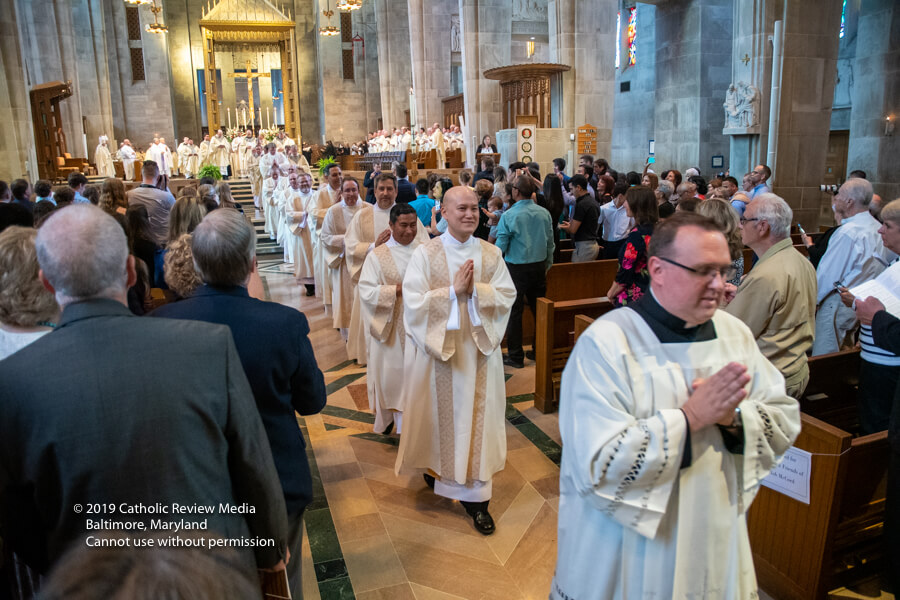 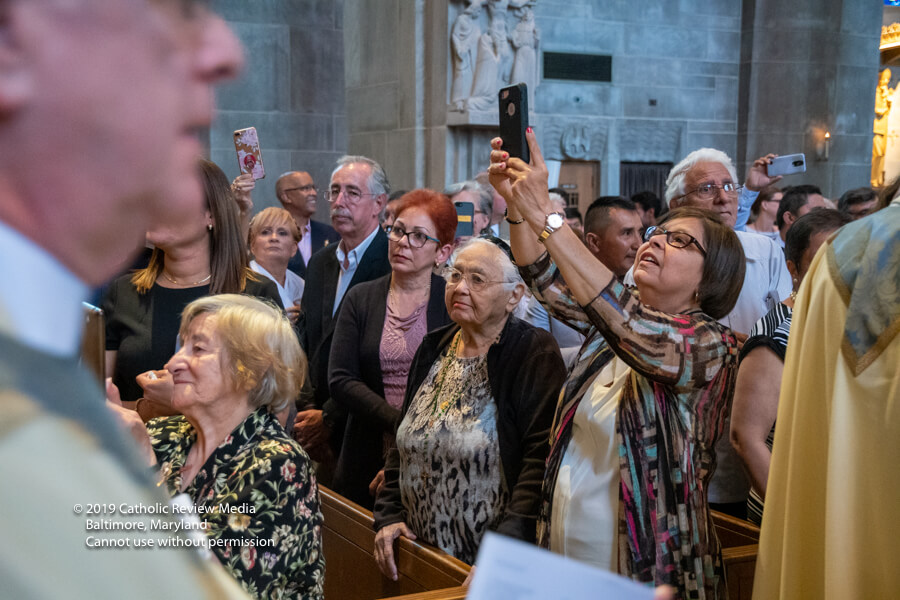 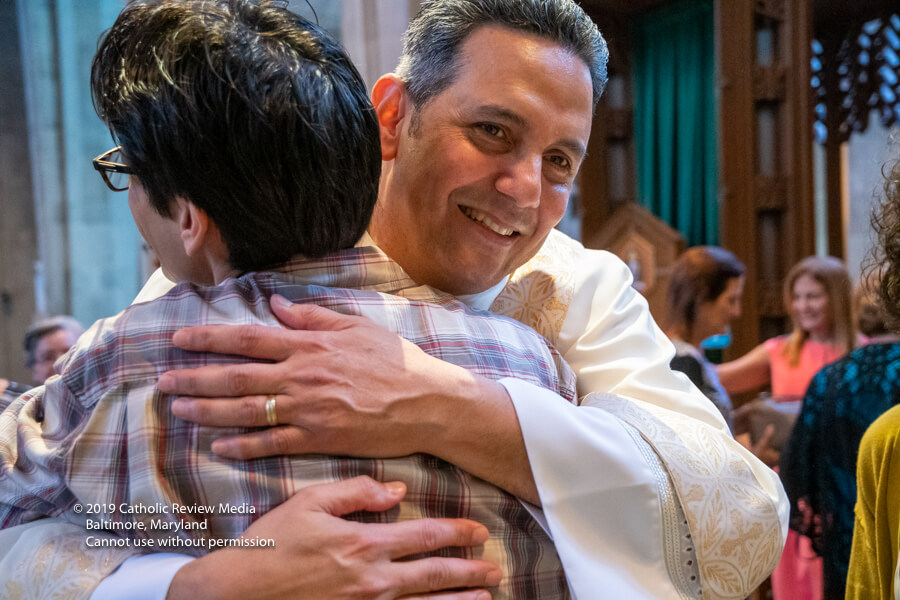 Father Michael Triplett, director of deacon formation, spoke of the importance of adding three Spanish-speakers to the archdiocesan clergy roster.

“The very first deacons were ordained to fill a need in a population that was neglected,” he said. “There is a need for the Word to be taught by native speakers.”

The crop included men who are already proven evangelists, such as Deacon Andrew Lacovara, who inspired his wife, Avendui, as well as her mother and stepfather, to join the Catholic Church.

That happened at Corpus Christi Parish in Baltimore, Deacon Lacovara’s home parish. He was vested by its pastor, Father Marty Demek, completing a journey that began under a predecessor, Monsignor Richard Bozzelli, and one that flourished under Father Triplett.

“He’s a happy warrior, sincere about the faith, making it a joyful experience to learn about it and the ministry,” Deacon Lacovara said of Father Triplett.

A commercial diver, Deacon Lacovara said that he is eager to “go out to the people on the margins and bring their needs back to the community.”

As the 14 men waited to follow a Knights of Columbus honor guard into the cathedral, one pronounced, “Here we go, brothers.” Father Triplett processed in alongside Father Patrick Carrion, his predecessor in the deacon formation program. They were followed Monsignor Richard Woy, rector of the cathedral.

“As you know, a gruff, pompous, or self-serving deacon is a contradiction in terms, for the word, ‘diakonia,’ has to do with gentle and generous service of others,” Archbishop Lori said in his homily, which directed the new deacons to “strive to imitate Christ.”

“Christ the Lord, who is ‘meek and humble of heart’ (Mt 11:29) – it is he who invites you to participate in his ministry. Your readiness to listen, your patience in difficult situations, your willingness to build bridges, and to avoid harsh and cynical speech, your rejection of all forms of clericalism – yes, it can happen to you as well – all this and more is what it means to be gentle in ministry, after the example of Christ.”

The 14 new deacons are listed below, with their assignments, effective July 1; and the clergy who vested them.  Click here for biographical sketches of the new deacons.

For more photos and to order prints, visit our Smugmug gallery here.