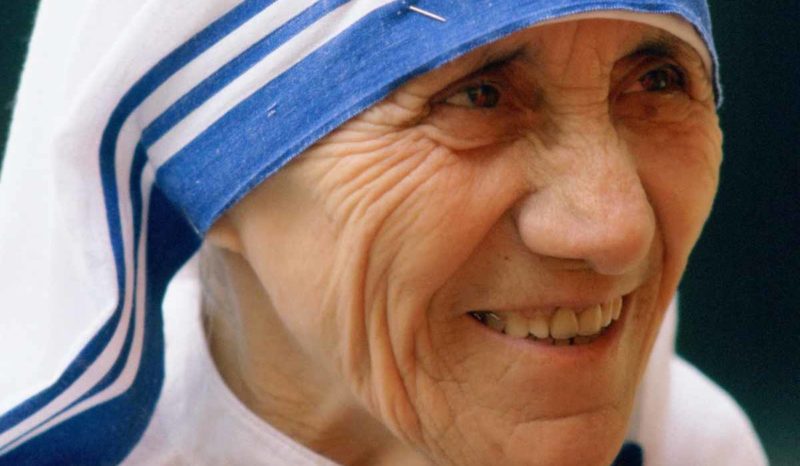 Even if you aren’t Catholic, you’re probably familiar with Mother Teresa and her charitable work. She’s one of the most modern figures of the centuries-old Church, having lived during the 20th century. In fact, her canonization on Sunday will take place one day before the 19th anniversary of her 1997 death.

Mother Teresa is usually best known for her missionary work. Born in what is now Macedonia in 1910, she left her family and her home at the age of 18 to become a Catholic nun with the Sisters of Loreto in Ireland before establishing the Missionaries of Charity, which now works around the world, in Calcutta, India. Mother Teresa was awarded the Nobel Peace Prize for her humanitarian work in 1979. To become a saint, though, the Catholic Church had to verify that Mother Teresa was responsible for at least two miracles. The new saint’s miracles include a woman in India whose stomach tumor went away and a man in Brazil who unexpectedly woke from a coma.

While important, these miracles might not be the most significant part of Mother Teresa’s legacy for younger generations of Catholics. That’s because — beyond her humanitarian work — Mother Teresa is known for struggling in her faith.

For several decades of her life, Mother Teresa reportedly did not feel the presence of God in her life. She kept this struggle relatively private, writing only to trusted members of the Church about her feelings. When her words became public after her death, though, much of the Catholic world was surprised, and maybe a little confused.

I previously wrote about the ways that Pope Francis has helped to transform the Catholic Church into an institution that millennials like myself can get behind. Now, the same pope will canonize Mother Teresa in a move that says a lot about both the saint and the Church.

Let’s face it: It’s not easy to be a Catholic in the 21st century. My former religion teachers from Catholic school would probably tell me that it’s not supposed to be easy — and I recognize that. In a world that values modern ideas, technological advancements, and scientific rationales, it’s probably not easy to be a devout member of any religion. Yet the Catholic Church, largely through Pope Francis, has taken huge steps toward modernizing in recent years. It has recognized that climate change exists, that abortion can be forgiven, and that gay believers should not be excluded from the Church community, to name a few.

Now, the Church has embraced a saint who, for many decades, did not feel the sort of connection with God that many Catholics would expect of a Church leader. Is this the Church’s way of saying to us modern Catholics that it’s OK for us to have doubts? Perhaps, though, despite her doubts, Mother Teresa always believed in God and carried on with her humanitarian lifestyle.

Ultimately, Mother Teresa’s sainthood doesn’t come as a surprise, but the story of her inner conflict might. As her story becomes an official part of Catholic teachings with her canonization, Mother Teresa’s darkness should remind modern-day members of the Church that such a struggle doesn’t discount your faith. Not to mention, it might also serve as the Church’s most recent step toward the 21st century.