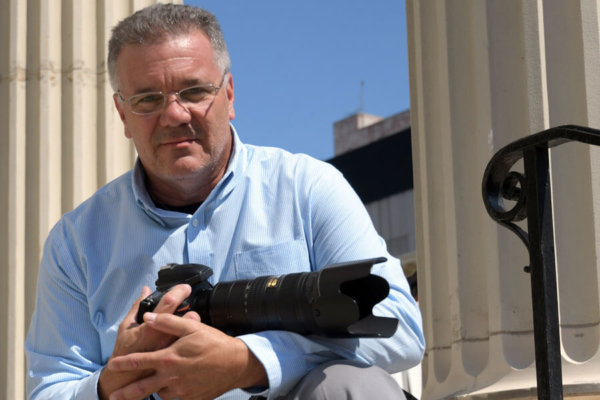 Kevin J. Parks, visual journalist for the Catholic Review, is back on the job after recovering from the removal of a brain tumor. (George P. Matysek Jr./Special to the Review)

In the pre-dawn hours of a cold Saturday in January, I awoke experiencing severe vertigo, an inability to stand, abdominal convulsions, massive sweating and loss of sight.

Imagine the intensity of your favorite amusement park ride and multiply that by triple digits. It was terrifying.

A journey into the unknown was about to begin.

After paramedics rushed me to the local emergency room in Harford County, doctors discovered a brain tumor and cyst in my head.

Exhausted but stable, I requested a transfer to Mercy Medical Center in downtown Baltimore, where I had worked as photographer for many years before accepting a similar post at the Catholic Review.

Dr. Charles Park, a skilled neurosurgeon, and his team removed the culprits from my brain stem Sunday morning.

Before I was taken to the operating room, Father Tom Malia, assistant to Mercy’s president for mission, stopped by my room and made the Sign of the Cross on my forehead. Dr. Park asked to pray with my family for skillful hands and a successful outcome.

A half-shaved head and 43 staples later, with surgery behind me and recovering in the ICU, I waited for test results to determine if the tumor was cancerous. I was also due for a body scan to see if anything spread.

Unexpectedly, Father John “Jack” Ward, my former high school teacher at Archbishop Curley in Baltimore and now my pastor at St. Francis de Sales in Abingdon, stopped by. He placed me on the parish’s prayer intentions as well.

Making her usual rounds as a Mercy chaplain, Sister of St. Francis Carole Rybicki visited. During our conversation, she asked me a polite, yet poignant question, “How is your relationship with God?”

Focused solely on what was medically ahead, her question caught me by surprise. I responded almost nervously, “Okay?”

You’re probably thinking this should not have even been a second thought. And you have a point.

Faith in God and the medical professionals were never in doubt. That said, I had never had been asked such a direct question during a private discussion – much less under such conditions. Not only did she cause me to reflect on that relationship, I pondered for a moment not being around for my family.

“No worries,” I thought to myself. I was in a place where faith and healing meet. If a doctor or nurse were not in my room, a member of pastoral care or people of faith were with me.

Over the course of my stay, I had several meaningful encounters with the hospital’s pastoral care department. The mission of the Sisters of Mercy and my Catholic faith brought peace to an otherwise precarious situation.

Having joined the Catholic Review as its visual journalist less than a year before my health concerns arose out of nowhere, the last thing anyone needed was for me to be out for many weeks recovering. Obviously, there was no choice in the matter.

Blessed that my test results were negative, I eventually returned to work. But it wasn’t until then did I realize the full extent so many prayed for my recovery.

My office added me to their prayers, and the Catholic Center included me in the building-wide prayer list.

Back full-time covering assignments, I contacted Mount de Sales Academy in Catonsville for a story, only to find school officials heard of my condition through the grapevine. I was added to their prayers as well.

Everywhere I went, it seemed, someone prayed for me.

Then a good friend of mine later shared that she prayed for a miracle. Prayer answered.

Many have said they would never have known by looking at me what occurred. I graciously respond that many were there for me in mind, body and spirit at one of the most crucial times in my life.

While I’m not sure how many prayed for my recovery, everyone’s thoughts played a major role in my positive outcome. To say that I am grateful for the care and prayers I received is an understatement.

I’m not the only one who has gone through a challenge with brain tumors. Arizona Sen. John McCain and several Hollywood celebrities have had similar high-profile struggles of late. When I read that Jeannie Gaffigan, wife of Catholic comedian Jim Gaffigan, was dealing with a large tumor wrapped around her brain stem, I wrote to them to share my experience and offer support. Jim wrote back to offer his prayers and support for me.

Sadly, we live in a world where faith continues to be mocked and criticized. Never doubt those who believe in the power of prayer. It just might save your life one day.

My alarm clock is no longer the dreadful necessity it once was. When I see the light of a new day hit my windows, I say quietly to myself, “thank you.”