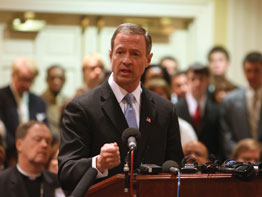 Calling the death penalty “an expensive and utterly ineffective tool in deterring violent crime,” Gov. Martin J. O’Malley implored members of the Senate Judicial Proceedings Committee to allow his proposed capital punishment ban to reach the floor for a vote by the full legislative body.

“The death penalty is fundamentally and irredeemably incompatible with the most important foundational truths of our republic,” Gov. O’Malley told committee members during an emotional Feb. 18 hearing in Annapolis that drew a standing room only crowd.

The Catholic governor said freedom, justice, the dignity of the individual and equal rights before the law are the “principles that define our character as a people. Are these principles compatible with the very real risk of erroneously taking the life of an innocent neighbor?”

Gov. O’Malley noted that when he was mayor of Baltimore, he witnessed violent crimes against humanity.

The governor’s bill, Senate Bill 279, would replace the death penalty with sentences of life without parole. Although the governor has testified against the death penalty once before, it is the first time he has personally introduced legislation banning capital punishment.

The Catholic bishops of Maryland support the bill, and Auxiliary Bishop Martin D. Holley of Washington spoke in favor of the measure on behalf of Archbishop Edwin F. O’Brien, chair of the Maryland Catholic Conference. The archbishop, who testified against the death penalty in August before the Maryland Commission on Capital Punishment, was in Rome and could not attend the hearing.

“Our church teaches that all human life is sacred and must be protected and defended from conception to natural death,” Bishop Holley told lawmakers. “It is a teaching which admits no exceptions – whether of a seriously deformed child in the womb, nor an elderly person suffering from grievous disease in its final stage, nor even a death-row inmate who has wrongfully and wantonly taken the life of another.”

While the church and the governor share common ground on capital punishment, they part ways on other life issues. The church is steadfast in its opposition to abortion and embryonic stem cell research, while Mr. O’Malley supports a pro-choice position and submitted a budget that includes funding for research that destroys human embryos.

With the support of the governor, death penalty abolitionists are lobbying hard for the Judicial Proceedings Committee to allow the bill to come to the floor. In 2007, the same committee narrowly voted down a similar bill. Last year, another bill against the death penalty died in committee before coming to a vote.

Lawmakers are considering a procedural move to allow the controversial bill to go to a vote in the Senate without a recommendation.

Former Attorney General Joseph Curran Jr., a Catholic, told committee members that it is not unprecedented to send a bill to the full Senate without a vote. He noted that when he chaired the Judicial Proceedings Committee in the late 1970s, the committee did exactly that when it sent a bill restoring the death penalty to the floor.

Testifying against repeal, former Gov. Marvin Mandel said he had a “conversion” on the issue after several firsthand experiences with criminals. He recounted that when he was governor, prisoners held a guard captain captive and threatened to throw him off a tower. Noting that Maryland did not have the death penalty at that time, one of the prisoners told the governor it would make no difference whether they killed the guard or not.

“I said, ‘tomorrow morning, the legislature will meet in special session to pass a bill to kill both of you,’ “ Gov. Mandel recalled. “So they released the guard. This is one time when it was a total deterrent.”

Sen. Alex X. Mooney, a Catholic Republican representing Frederick County who has previously voted against a ban on capital punishment, again holds a key vote on the committee. He asked Gov. O’Malley if the governor would support amendments to the bill allowing the death penalty only in cases of prisoners who kill while in prison.

Gov. O’Malley responded by saying he did not believe in ranking the value of human life.

“The difficulty with exceptions is that eventually you’ll be back to a point when there are a hundred or 1,000 exemptions,” he said. “The only and best way forward is an outright repeal.”

Citing racial and geographic disparities in the way the death penalty is applied and the possibility of executing an innocent person, the Maryland Commission on Capital Punishment recommended a ban on the death penalty in December. Auxiliary Bishop Denis J. Madden served on the commission.

The Archdiocese of Baltimore will host an interfaith prayer service for the repeal of the death penalty on March 8 at 7 p.m. at the Basilica of the National Shrine of the Assumption of the Blessed Virgin Mary in Baltimore.