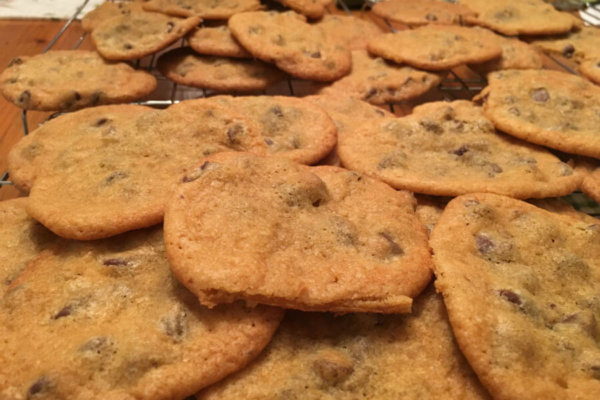 Winter is baking weather. But sometimes I forget that my children don’t really appreciate baked goods. So last weekend when I made chocolate chip cookies, I made a big double batch and ended up with way too many.

Somehow I managed to get rid of them. I gave some to friends and took some to work to share with colleagues. And we did eat a few at home.

What is it about chocolate chip cookies? I always use the Nestle Toll House recipe from the side of the chocolate chips, but I use all white sugar and a little molasses instead of white sugar and brown sugar. That’s how my father always makes his, and I take all my cookie baking tips from him.

Happy Groundhog Day! You know the drill. If the groundhog sees his shadow, the children will have six more days off for snow this winter. If he doesn’t, they’ll have six more two-hour snow delays.

I have to admit that I don’t mind the closings as much as the delays. Delays throw everyone off. And I don’t think children learn much after 11 a.m. anyway.

But the groundhog never listens to me. And neither does the weather. 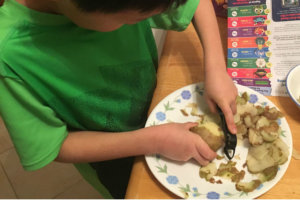 As I was getting dinner ready the other day, Daniel walked in and looked at the potatoes on the table.

“Are you making mashed potatoes?” he asked.

I usually make ours with the skins, and he knows it. That’s how my husband and I like them, and it saves a step. But I’m open-minded. So I handed our second grader a peeler, and he happily peeled the potatoes. 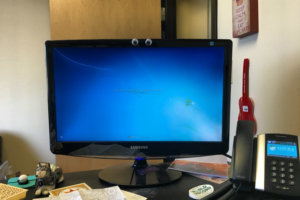 This week at work we celebrated a colleague who has worked there for 10 years. I suppose we could have just given him a card or a cake, but I work with this amazingly creative group of people. And we do like to have fun together. So we created a whole theme and people put their ideas together for a fantastic celebration.

As part of the festivities, we ended up with a bag of googly eyes. And the eyes are appearing everywhere—on door handles, on keyboards, and other spots around the office. I found a pair on my computer monitor.

I love a good office prank. And I’ve been part of my share over the years. You spend so much time at work that you have to be able to have some fun there. And everyone can use an extra pair of googly eyes. 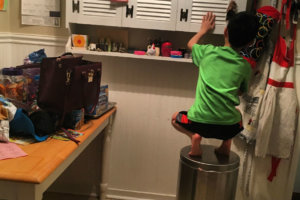 Our children might not love baked goods, but each of them has a sweet tooth. And Daniel loves, loves, loves candy. So I try to keep it out of sight and preferably out of reach.

But there is no fooling this child. He notices everything and he is surprisingly intuitive. The other day I was washing dishes in the sink, and I turned around and saw him balanced on the trash can, about to open the cupboard with the candy inside.

I need to up my game. 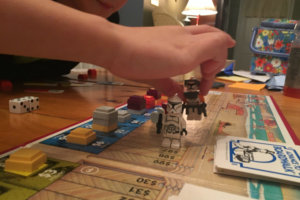 We’ve started having family board game nights! For a while, it didn’t seem like a great idea because someone has to win and three of us have to lose. But in many ways it’s easier than picking a movie everyone wants to see.

And I like seeing how the boys substitute their own figures for the less exciting game pieces that come with the games. It’s a little confusing when the colors don’t align, but that’s part of the challenge, of course.

Maybe that explains why I lost so soundly the other night.

Almost every night during the winter, my younger son has what we call “a hot ear” as he’s falling asleep. Every once in a while, when he remembers to wear his ear muffs during the day, it doesn’t happen. I can’t explain the science of it, but it’s a strange delayed reaction to the cold.

So many nights, in addition to asking for a drink of water or help retrieving a stuffed animal that’s fallen on the floor or to answer some question he just thought of, he calls “Mommy!” and asks me to bring him an ice pack.

I wonder whether he’ll grow out of it someday.

~Bonus Take Because I Miscounted~ 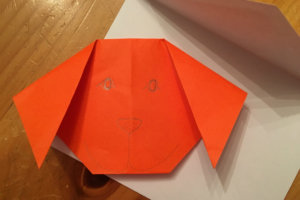 Have I mentioned how much Leo likes origami? When we were looking for a dog notecard to send to friends, I asked Leo whether he knew how to make an origami dog. And he does—or at least a dog’s head. I thought it was so cute.

I never cease to be fascinated by how our children’s interests grow and change and sometimes return to an interest from the past.

It seems to have nothing to do with what we introduce them to. They just encounter the world in the most interesting ways—all on their own.

Read more quick takes at Kelly’s post, This Ain’t the Lyceum, and have a wonderful weekend!