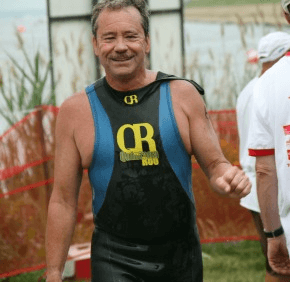 Bob Matysek died doing something he loved - swimming. He was attempting his 20th Great Chesapeake Bay Swim when he died. (Courtesy Matysek Family)|

“He came out of the water smiling at the crowd and waving to his wife and our family,” remembered Tom Matysek, Bob’s older brother. “For him, it was the second best day of the year after Christmas.”

This year, the crowds never got to see Bob’s mustachioed grin.

In attempting his 20th crossing June 8, my cousin began having problems about a mile into the swim. Rescuers could not revive him, and he died at age 58. He leaves behind a wife of 31 years.

Many, including those who knew Bob best, have called it something of a gift that he died doing what he loved. I think they may be right.

Going back to his boyhood swimming at Woodlawn Country Club, Bob’s second home was the water. He and his brothers were all gifted swimmers, with Bob, Tom and Gene all swimming for Mount St. Joseph High School in Irvington, and brothers Joe and Jim competing for Calvert Hall College High School in Towson (after the Mount suspended its swim program for a time).

Bob, who worked in South Carolina as a chemical engineer, also swam for Carnegie Mellon University in Pittsburgh, where Jim was a three-time All-American. The other three Matysek brothers swam for what is now Loyola University Maryland in Baltimore.

The brothers’ passion for the water was cultivated by their parents, Eugene (who died in November) and Helen Matysek, former longtime parishioners of St. Gabriel, Woodlawn.

“Mom and Dad had five boys, so they wanted something to wear us down and get the energy out of us,” remembered Tom, a parishioner of St. Stephen, Bradshaw. “Mostly, it was a ruse to keep us busy and out of trouble – and we liked it.”

After Tom completed his first Great Chesapeake Bay Swim in the mid-1980s, he got his brothers’ competitive juices flowing by wearing a Bay Swim T-shirt at family gatherings, and making references to his participation in the event.

“You know, brothers like to point these things out,” Tom said with a laugh.

In short order, all Matysek brothers were competing. Before dying of a brain tumor in 1993, the eldest, Gene Jr., competed in two races. Tom and Jim have a total of 27 crossings; Joe has 15.

Tom noted that of the thousands of people who have completed the event, only 30 have done it 19 times or more.

“That gives you an idea how persistent Bob was,” Tom said. “He loved the challenge.”

Bob, who read the Bible every day, really wanted to see the Matysek brothers hit 100 crossings among them. Right now, the number stands at 90. Tom and Jim are planning to swim in the event next year as a tribute to their brother. Carl Matysek, Bob’s nephew, will join them. Counting the seven previous swims of the nephews, that will bring the Matysek total to 100.

Gayle Matysek, Tom’s wife, noted that on the weekend of Bob’s death, her brother-in-law watched his beloved Orioles at Camden Yards, feasted on crab cakes, played cards and enjoyed time with his family.

He left this world doing what he loved and being with those he loved.