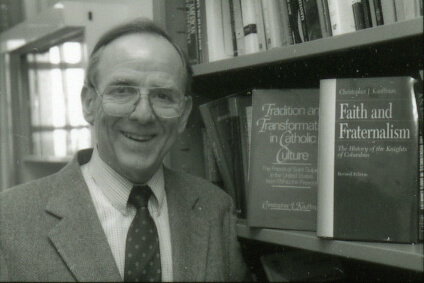 It’s not possible to overstate Christopher J. Kauffman’s contributions to U.S. Catholic studies, according to Tricia Pyne, archivist for the Archdiocese of Baltimore.

The eminent church historian was the author of numerous books and scholarly articles. He served as general editor of the “Bicentennial History of the Catholic Church in America,” an award-winning six-volume set published in 1989 that was presented to St. Pope John Paul II.

The St. Louis native was the general editor of the eight-volume series, “American Catholic Identities: A Documentary History.” He also launched the U.S. Catholic Historian scholarly journal in 1983, serving as general editor until 2013.

Kauffman “greatly influenced the development of the field over the past 35 years,” said Pyne, who worked on her doctoral dissertation with Kauffman as a graduate student at The Catholic University of America in Washington, D.C.

Kauffman, 81, died Jan. 30 at Oakcrest Village Care Center in Parkville. A funeral Mass was offered Feb. 17 at Corpus Christi in Bolton Hill, where Kauffman had been an active parishioner for many years.

Pyne called it a privilege to know Kauffman, who served on her dissertation committee.

“He represented the best of our profession – a gifted scholar, a tireless advocate for the field of U.S. Catholic history and promoter of those who studied it, and someone who always made himself available to others,” she said.

Kauffman, who earned his bachelor’s degree from St. John’s University in Collegeville, Minn., and a master’s degree and doctorate from St. Louis University, was named the Catholic Daughters of the Americas Chair in American Catholic History at Catholic University in 1989. He taught until his retirement in 2008.

Other books include “Ministry and Meaning: A Religious History of Catholic Health Care in the United States” and “Education and Transformation: Marianist Ministries in America Since 1849.” He also published a biography of William Howard Bishop, the founder of the Glenmary Home Missioners.

During the bicentennial of the founding of the Archdiocese of Baltimore and the Catholic Church in the United States, Kauffman organized a two-day Baltimore symposium in 1989 that covered topics including the role of women and immigrants in the development of the U.S. Catholic Church.

Approximately 200 bishops, priests, religious and lay people attended the symposium, which Kauffman said was intended to “explore the crossroads where the past and present intersect.”

Kauffman told the Catholic Review in a 1989 interview that immigrants played an important role in the church’s development and that more historians are discussing their importance because of the wave of new immigrants.

“The new immigration is shedding light on alternative ways of doing things,” said Kauffman, whose U.S. Catholic Historian often examined long-neglected topics in church history such as the role of minority groups. “We’re trying to listen a little more now than we did in the past.”

Sister Patricia Murphy, a School Sister of Notre Dame who served on her religious community’s provincial council in the 1990s, approached Kauffman for assistance in preparing a history of what was then the School Sisters’ Baltimore Province. Kauffman provided invaluable guidance — all gratis, said Sister Patricia, who was active at Corpus Christi at the same time as Kauffman.

“All the work he has done over his career is tremendous,” Sister Patricia said.

Long an advocate of social justice, Kauffman volunteered at a soup kitchen sponsored by Corpus Christi.

“He was very humble, very generous and very inviting to everyone who walked in the church,” Sister Patricia said.

Kauffman is survived by his wife of 51 years, Helen “Squeaky” Kauffman; three children and seven grandchildren.