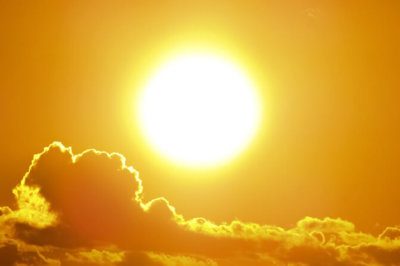 Arriving in hot, humid west Florida on a recent evening after our flight from Baltimore had been delayed for six hours, Hubby and I walked into our beach house at nine o’clock in the evening, and were hit in the faces by muggy stale air.

Uh-oh … broken A/C. Hungry and hot after waiting for a flight all day is not a great mix – for any couple.

Now, without delving into my theory of how the invention of central air conditioning has totally ruined the human body, the point is, we are spoiled by it – and there is no turning back. Being overheated and without air conditioning feels brutal since we know what it feels like to exist in cooled air. People tend to become a tad fired up as they sweat unnecessarily. Tempers flare. Fuses shorten. Basically, we act like big clammy babies.

Air conditioning units should have this label stuck to them:

WARNING – Marital agitation may set in should unit break.

“Turn off the lights! It will stay cooler!”

“Why do you keep closing the shade? You’re blocking the breeze!”

“What, we have no ice either?”

“Don’t open the slider, there’s no screen. Mosquitoes will get in!”

“Why won’t you go sleep in [our neighbors] air conditioned guest room? They offered!” (Three of them actually)

Now, I won’t admit which of us whined which sentence, but let’s simply agree – we both felt irritated that night. (The cliché hot and bothered may even have come into play from some other married couple, we’ll never know. Yet I understand it now.)

Hubby and I tried to sleep on the first floor on two leather couches under a rapidly spinning ceiling fan and the slider door wide open. That didn’t last. I was convinced some Floridian creature was going to crawl in to snuggle in my sheet or an ax murderer would visit the living room. Who knew being overheated exemplifies fear?

I snatched my pillow and sheet and stomped upstairs, mumbling, “This isn’t working for me,” and tried to find slumber in bed under another whirling ceiling fan with the second floor slider open (and where an ax murderer couldn’t climb that high).

I woke up a few times to gulp water and flip positions as I continued sweating. The 1981 movie Body Heat kept popping into my head, which took place in a searing Florida heat wave. (And something about the main character wanting to snuff out her husband, I can’t remember exactly.) I actually thought about sleeping on a raft in the swimming pool or the back deck. Then again, hmmm, still that issue of night creatures and intruders.

Once my body adjusted to not feeling cool, it wasn’t so awful. I had earlier dipped into the pool so as to sleep with wet hair; and in the morning, cooled down again beneath a cool shower. Hubby went to play golf (where apparently, it is acceptable to feel overheated) and I sat with my laptop to write and wait for the repair guy, with every window and door wide open. Thankfully, God had sent a lovely beach breeze.

I can do this!

I thought back to my 1960s childhood when we endured the humidity with one air conditioning unit in a window cooling the entire house (eventually) and we hung towels in the doorway to trap the cool air in the kitchen and den. (Did Mom and Dad argue because they were hot?) Even younger as a tot, I remember sitting on the couch at Nonna’s house in Dundalk, in front of a giant grey metal fan wedged in the window, making “aaaggghhhhhhh” noises as the spinning blades altered my vocal chords. After eating all of Nonna’s homemade ravioli, what else was there to do on a ridiculously humid Baltimore Sunday afternoon?

How do we find calm when we feel uncomfortable? In any irritating situation in daily life, remaining composed and neutral can work. The more we allow ourselves to feel fired up over petty stuff, the more self-provoked we will become. Putting a situation into perspective and not allowing it to rule and ruin our day, or our moods, is most beneficial.

I saw a Facebook post from my friend which read: “Day from hell!” and I thought, Does she actually know what a day from hell feels like??? Or is it we merely allow the tiniest of annoyances to creep under our skin? Is it actually worth the exertion to become hot and bothered? Doesn’t that cause us to feel hotter and further bothered???

It’s all about perspective. Let us remind ourselves:

The cool happy ending, less than 24 hours later, was a quick $562 repair to the air conditioning unit by dear Doug (the profusely sweating fixer), a peek at human nature, and Hubby and I surviving a summer night in the Florida heat with a broken air conditioner … together.