The coaches and presidents from Calvert Hall College High School and Loyola Blakefield echoed the point: the Turkey Bowl is about more than football.

The youths who emceed the April 1 unveiling of the logo for the 100th playing of what is believed to be the nation’s longest uninterrupted football series among Catholic high school rivals can attest to that, as will the men who founded the Baltimore-based company that created the new brand.

None of the four made their mark in athletics; all contribute to the sense of community inherent in one of the state’s most enduring sports traditions.

While the Thanksgiving Day game is still nearly eight months off, the hoopla began with a media conference led by students.

Travis Fruhling did the honors for Calvert Hall, where he’s the social media correspondent, doing everything from narrating videos to helping maintain the Instagram account. He hails from St. Stephen in Bradshaw, where he has served as chairman of the parish’s annual Fall Festival. Upon graduation in June, Fruhling will head to The Catholic University of America in Washington, D.C.

Marlo Lacson, a junior at Loyola Blakefield whose family worships at Immaculate Conception in Towson, knows the bright lights. He played Daddy Warbucks in Maryvale Preparatory School’s 2018 staging of “Annie,” and was Juror No. 4 in the Dons’ staging of “12 Angry Men.”

Ed Callahan and Matt Doud remembering being in similar shoes. 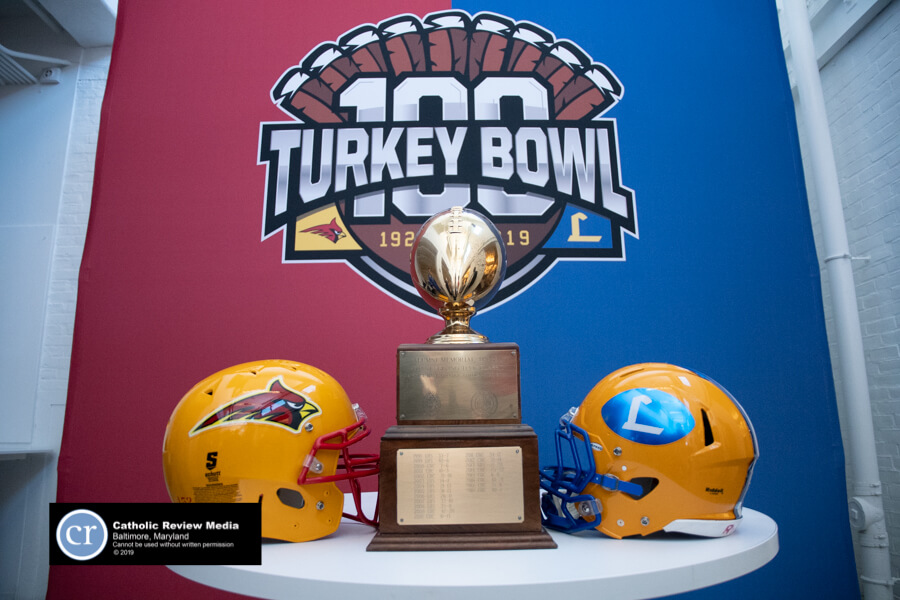 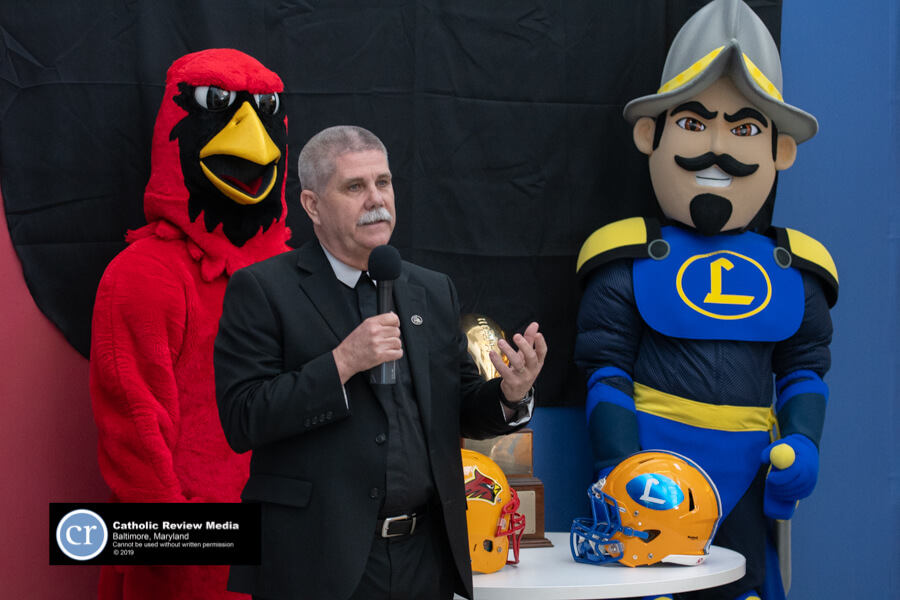 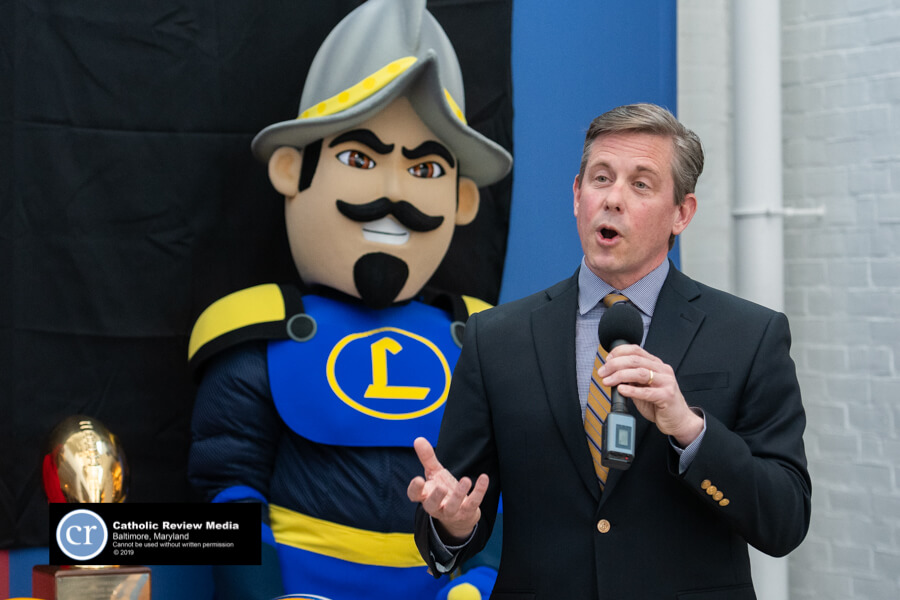 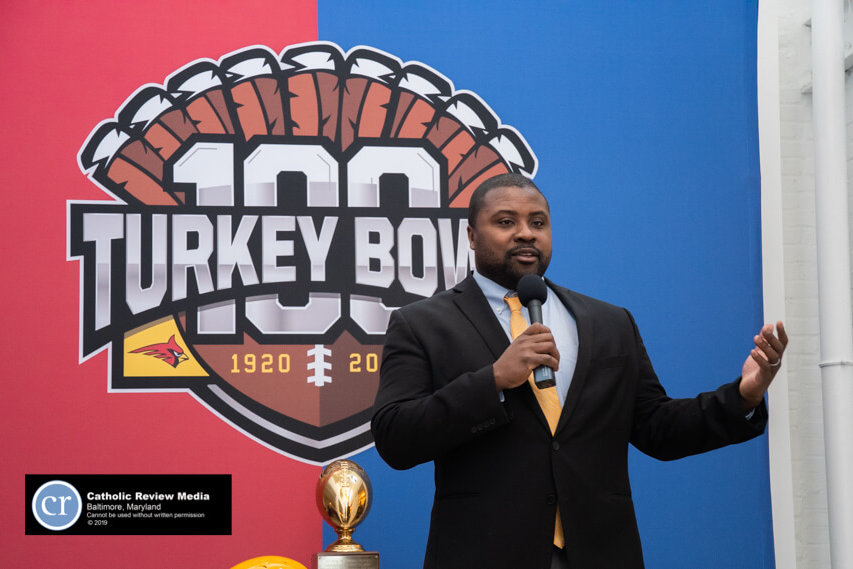 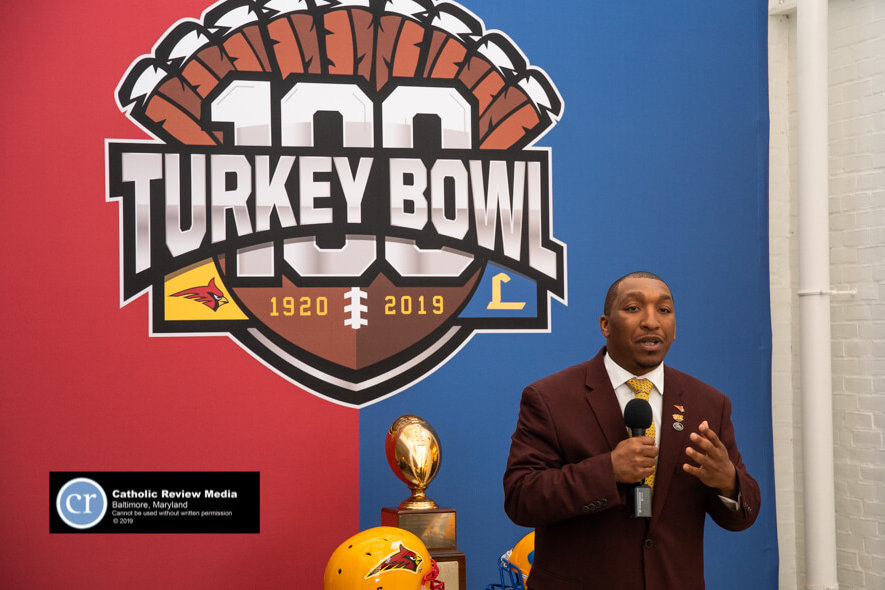 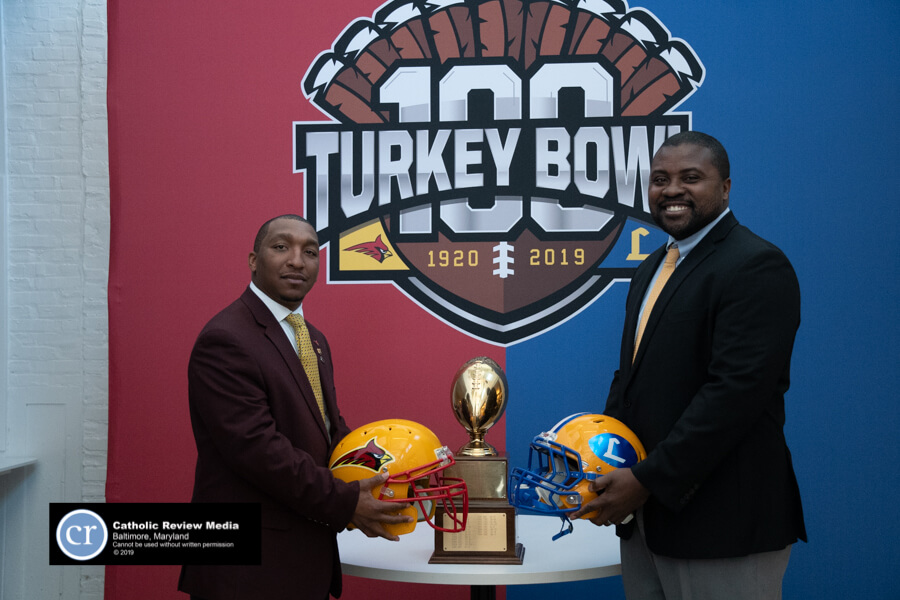 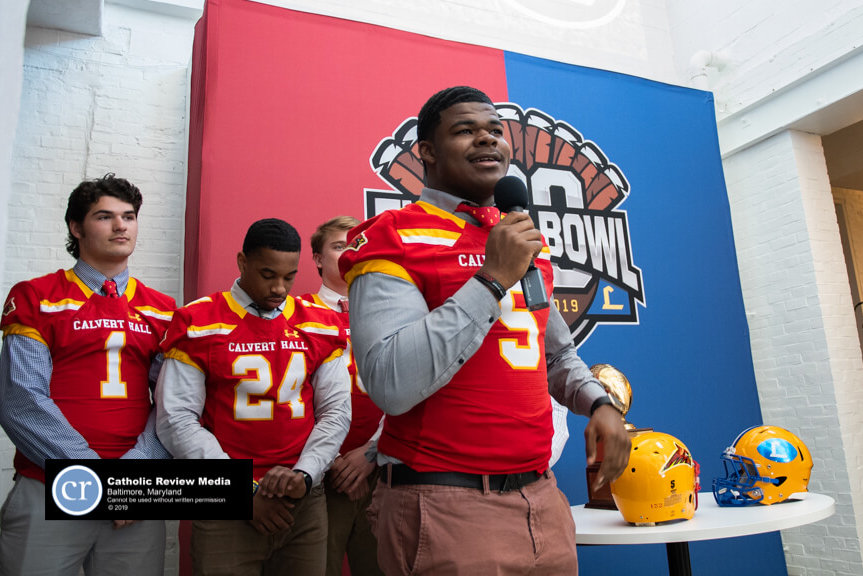 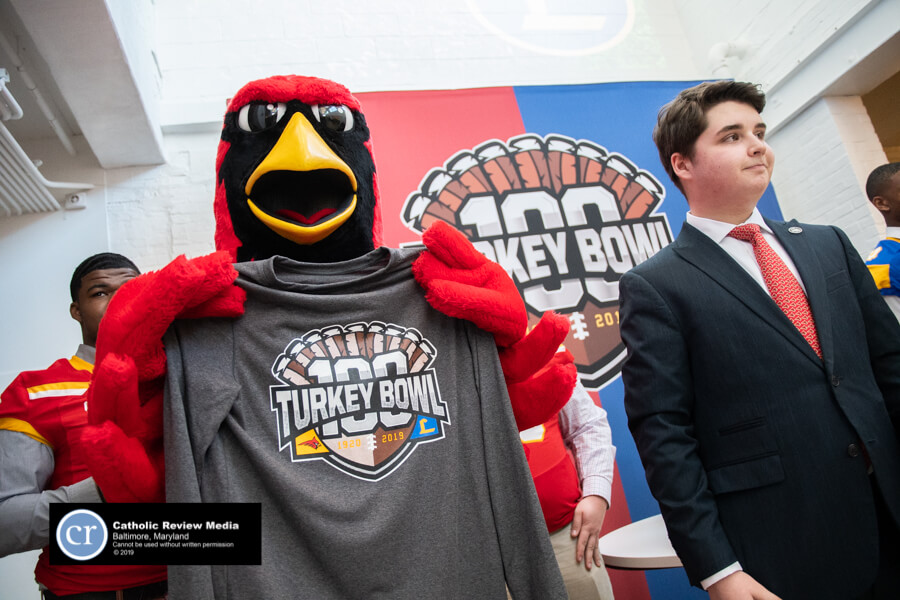 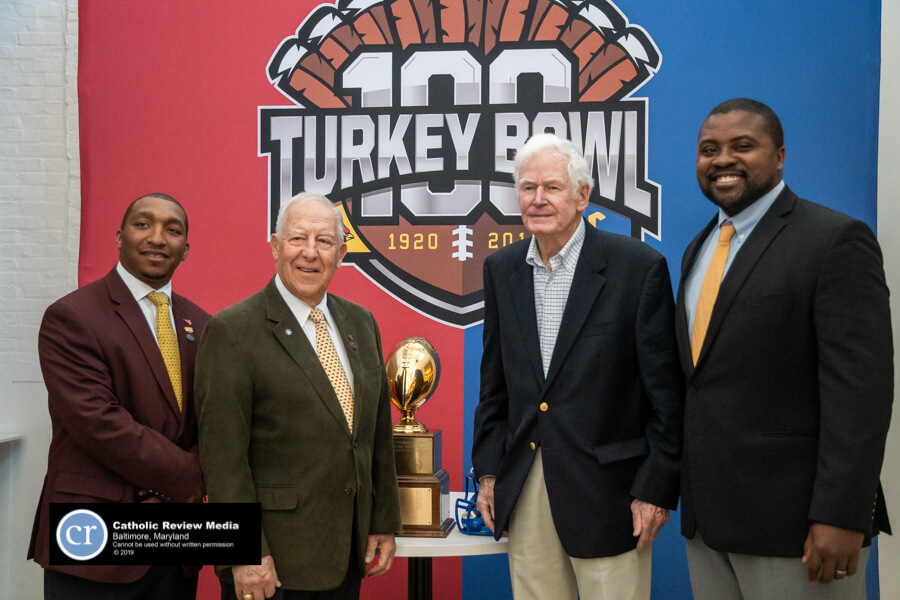 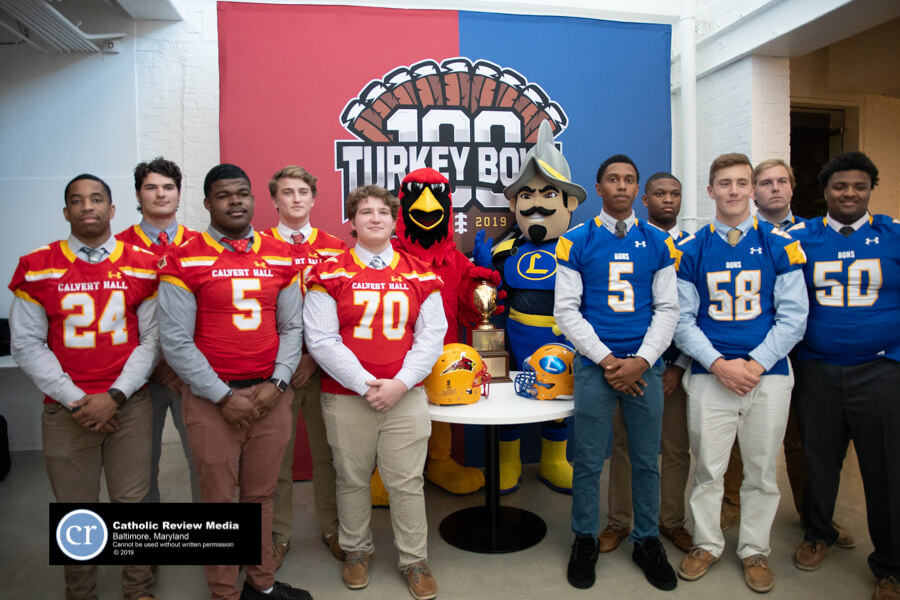 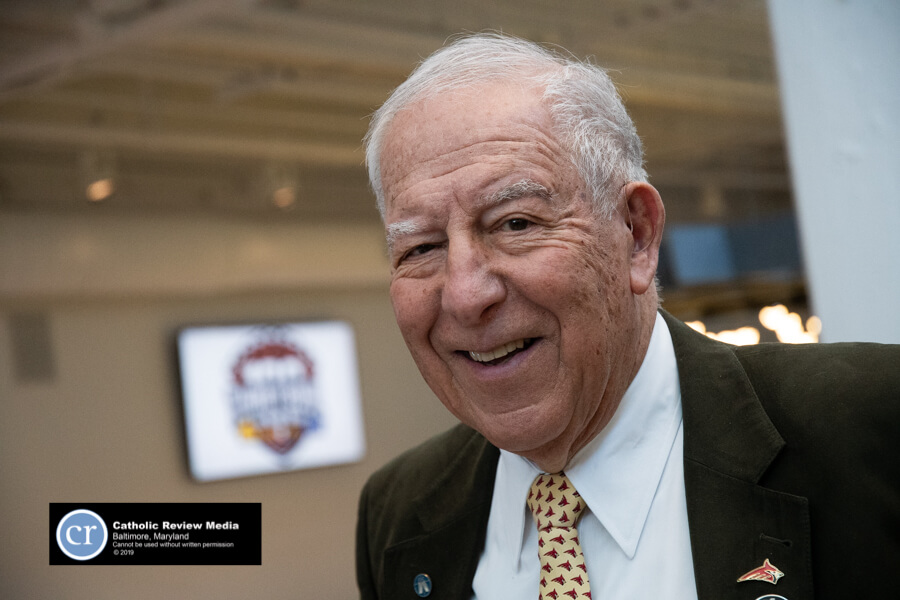 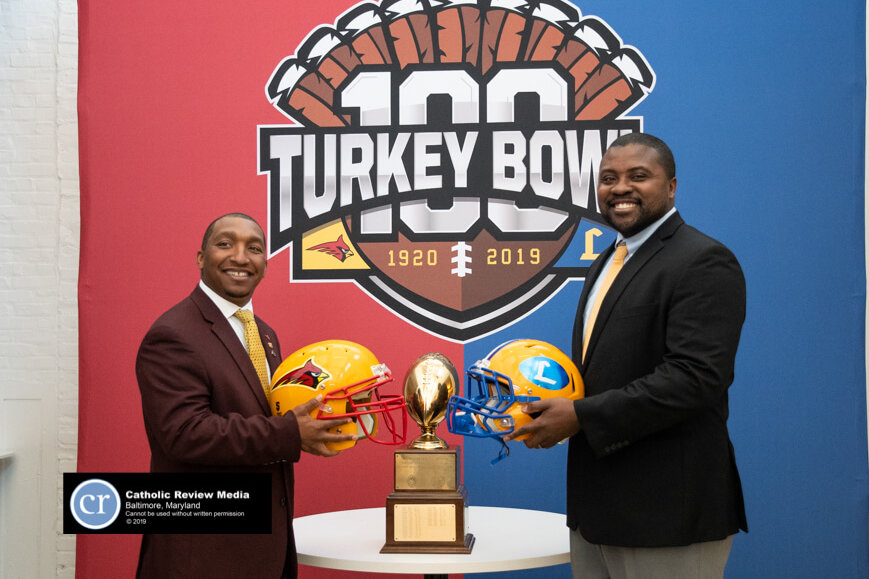 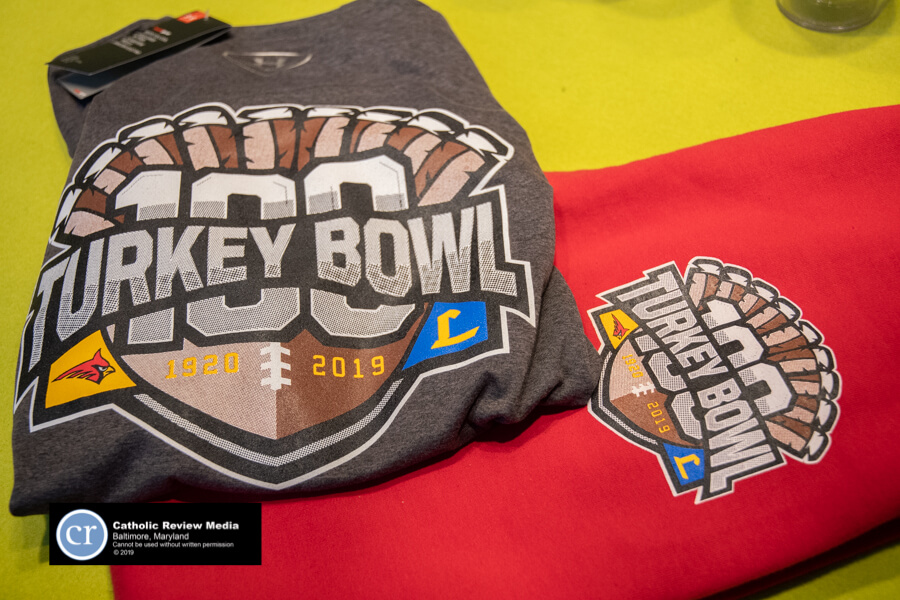 Soon after co-founding Planit, a communications, marketing and digital agency, in the mid-1990s, their local promotions included an ad in the Turkey Bowl program. It was a natural, as Callahan went to Calvert Hall and Doud to Loyola, both in the class of 1986.

“I went to Calvert Hall because of its art program,” Callahan said. “Matt was the writer.”

Their friendship began as third-graders at St. Joseph School in Cockeysville, which they reference by its historic name, “St. Joseph Texas.”

“We used to ride our bikes up and down York Road,” Doud said. “It wasn’t quite as busy then.”

Doud went to Wheeling Jesuit University in Wheeling, W.Va., and Callahan to Towson University. Even then, they spent summers hanging out together down Ocean City.

Callahan and his wife, Melinda, worship at St. Joseph in Cockeysville and are the parents of four, including Eddie, a junior at Calvert Hall, and Catie, a sophomore at Notre Dame Preparatory.

Doud and his wife, Sylvia, a counselor at Cristo Rey Jesuit High School in Fells Point, are parishioners of the Cathedral of Mary Our Queen in Homeland. Their sons Henry and Charlie are a sophomore and a freshman, respectively, at Loyola Blakefield. They are third-generation Dons, as Doud’s father, Tom, was in the class of 1952, with, he said, “Mr. Brune.”

That would be Joe Brune, the former Loyola Blakefield coach, who attended the media conference along with his primary coaching rival, Augie Miceli, who is retiring this year after 60 years as a math teacher at Calvert Hall.

Also on hand were the schools’ presidents and coaches, Christian Brother John Kane and Donald Davis from Calvert Hall, and Anthony Day and Anthony Zehyoue from Loyola Blakefield, as well as a selection of players.

The preparation for the centennial game will include a commemorative book and an Oct. 11 social at Martin’s Valley Mansion. The game itself, with its traditional 10 a.m. kickoff, will be played Nov. 28.

Loyola leads the series, 49-42-8, but Calvert Hall has won the last five meetings.