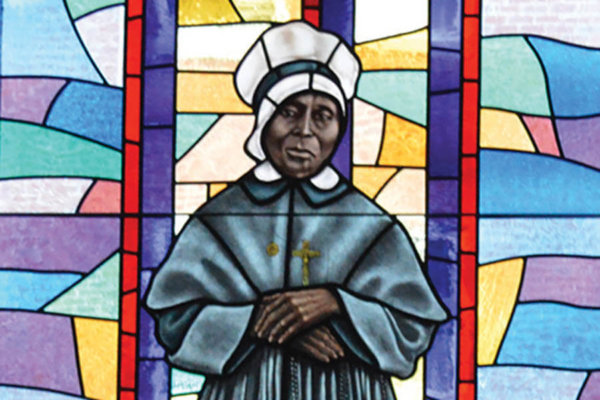 A stained glass window depicting Mother Mary Lange is located at the Our Lady of Mount Providence Convent Chapel in Halethorpe. (CR File)

November is National Black Catholic History Month, a time the church in the United States sets aside to recall the rich history of Black Catholicism and the many and important contributions that African-Americans have made to our church. Here in our Archdiocese of Baltimore, we need not look far to see the legacy of those Black Catholic pioneers whose works continue to bear fruit in our local church and beyond.

Elizabeth Lange fled her Haitian homeland in 1817 and arrived in Baltimore where she began a school to educate black children in her new Fells Point home. Eleven years later, Elizabeth Lange made history when she and three other women of African descent took formal vows of poverty, chastity and obedience in the lower chapel of St. Mary’s Seminary, founding the Oblate Sisters of Providence. St. Frances Academy in East Baltimore, operated by the Oblate Sisters, opened in 1828. It continues to this day to be a beacon of hope for predominantly African-American children and traces its roots to Mother Lange’s school.

Charles Uncles became the first African-American ordained to the priesthood in the U.S. when he took his vows at the Basilica in Baltimore in 1891. He was one of five priests who founded the Josephite Fathers, who had been given the ministry of “Negro Missions” in the U.S. by Pope Pius IX.

It’s impossible to tell the history of the Baltimore Archdiocese or the church in the United States without noting the invaluable contributions of the Josephites, who lovingly minister to God’s people at St. Francis Xavier, St. Peter Claver/St. Pius V, and St. Veronica parishes.

Among the many holy priests to profess vows for the Josephites is our own beloved Bishop John H. Ricard, who was ordained an auxiliary bishop for the Baltimore Archdiocese in 1984 before becoming Bishop of Pensacola-Tallahassee in 1997.

And service to the church and to Black Catholics extends beyond the clergy, as laymen such as Charles Tildon and Samuel Cooper contributed their time and talents to many Catholic parishes and ministries. Tildon was named by Cardinal Lawrence Shehan – archbishop during the Civil Rights Era – as the first chairman of the Archdiocesan Urban Commission, formed in 1966. He was the first layman appointed to head a major archdiocesan post.

The commission was formed to identify problems in Baltimore City such as race relations, community development, mass incarcerations, homelessness and the treatment of blacks in Catholic hospitals. Then it worked to identify how the church could play an integral role in addressing these problems.

Cooper, who died just last month at the age of 93, served on many boards and committees, including the Archdiocesan Pastoral Council, and raised money to support the ministries of the Oblate Sisters. In 1983, in recognition of his many contributions, Pope John Paul II conferred upon him the highest honor awarded to a member of the laity, the Pro Ecclesia et Pontifice medal.

There are countless examples like these of women and men throughout the history of our archdiocese who have contributed greatly to the church’s mission of living out the Gospels and sharing the Good News of Christ’s love through acts of prayer, service, and generosity to others. May the examples of Mother Lange, Father Uncles and others inspire us to follow in their footsteps on the journey for peace, justice and unity. And may we take time this month to give thanks for the many ways in which the Black Catholic community has enriched our church and continues to bless us with their faithful witness.