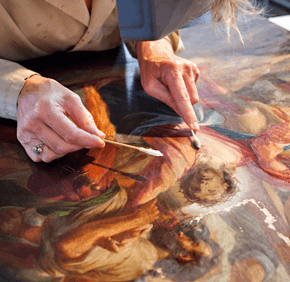 The artwork, a depiction of Christ fallen beneath the weight of his cross, had once hung beside other Stations of the Cross inside the Basilica of the National Shrine of the Assumption of the Blessed Virgin Mary in Baltimore. Now, the blackened oil painting rests on an easel in Pollak’s home studio in Frederick County, a spotlight trained on one section of the sullied canvas.

“This is what we do, swab after swab,” Pollak explained, gazing from behind a pair of magnifying glasses in early July.

Pollak’s white cotton, dipped in solvent, turned pitch black as it absorbed grime accumulated over the course of more than a century. While the work is painstaking, she said, it is not tedious.

It’s really exciting when you’re cleaning to see what’s happening underneath,” she said. “It catches your breath when you’re doing it because you don’t know exactly what’s there until you take it off.”

Pollak, owner of Art Care Associates, is working with Sian Jones, owner of Art Conservation Services in Baltimore, to bring the basilica’s Stations of the Cross back to their original beauty.

The stations were created in Italy by unknown artists and installed in the basilica sometime in the mid-19th century. It is believed they were removed during a renovation of the basilica in the 1940s, and were placed in storage in the church’s undercroft.

When the basilica was restored in 2006, the oil paintings were salvaged and returned to the walls. A cleaning completed at that time removed an outer layer of dirt, but did not take away multiple layers of varnish mixed with dirt that had severely discolored the artwork.

One station that had been lost was recreated in the same style as the originals.

“We’re seeing multiple layers of dirt and varnish – and then more dirt,” Pollak explained, noting that varnish was used in several earlier conservation efforts to preserve the images. That varnish only darkened over time, she said.

One of Pollak’s restored stations, the Second Station of the Cross, has already been returned to the basilica for display. Monsignor Arthur Valenzano, rector, said parishioners are amazed by how vibrant its colors are.

“The beauty that was there did not shine through all the dust, the dirt, the grime, the candle smoke and the varnishings over the years,” he said.

Once the dirt and varnish are removed, Pollak said, “you get a much better sense of the detail, the sense of depth and the sense of architecture in the paintings.”

“There are just so many things to look at,” she said, pointing to intricate characters in a crowd scene and depictions of buildings that had not been noticeable until they were cleaned.

One of the biggest challenges, Pollak said, is discerning what paint is original and what was overlaid in previous restorations. Non-original paint is being removed. Where there are damaged spots beneath that coat, restorers are in-laying paint dot-by-dot, matching the original colors.

“We don’t want to cover anything that’s original,” said Heather Smith, associate conservator at Art Conservation Services. “All the materials we use are easily detected by other conservation professionals. They are easily removable with mild solvents that won’t touch the original paint.”

Repair work is separated from the original with a synthetic varnish, she said.

Jones speculated that abrasions, thin layers of missing paint, may be the result of earlier restoration efforts that used harsh solvents. Some damage to the lined canvasses may be due to the way the paintings were stored in the undercroft, she said.

“We don’t know how they were stacked or if they were framed or unframed,” Jones said.

The entire restoration effort is expected to be finished by Holy Week of 2015.

Monsignor Valenzano said the cost of the restoration is approximately $5,000 per station. Contributors have already donated enough to restore seven stations. The basilica is accepting additional donations, he said, with opportunities available to memorialize family members.

Working on the restoration has been spiritually moving for Pollak. Reflecting on the expression of anger on the face of a man kicking Jesus in the station she was restoring, Pollak said the paintings elicit a sense of empathy.

“Just look at how he’s got his foot on Jesus’ shoulder,” said the parishioner of St. Timothy in Walkersville. “You get a sense of the cruelty, and you know this is part of our faith. I know the story of the Stations of the Cross, but seeing it in a painting like this just makes it very real to me.”

Monsignor Valenzano hopes the restored paintings will make Christ’s passion more present to all who look upon them – whether in individual prayer or community liturgies.

“They help focus prayer,” he said. “It’s a beautiful tradition in our church.”

View a video of the restoration work: