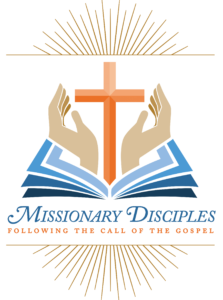 Sights, sounds and smells of Little Italy’s St. Anthony Festival surrounded Pallottine Father Bernard Carman as he settled in a booth with three signs on his table:

Despite rain during the 114-year-old gathering June 2-3, Father Carman, pastor of festival host St. Leo the Great, saw a steady stream of visitors from his spot in front of the church.

Many, he said, requested prayers for those suffering from cancer. Others who brought along pets asked for a blessing of the animals. Some simply sought conversation.

“It’s a good way to show the faith without being obnoxious,” Father Carman said. “If you go running, waving a Bible around and screaming about Jesus, first of all, you scare people. Second, you convince them that religious people are nutty. Third, they’re liable to call the police, and all of a sudden you’ll find yourself in prison ministry.”

Father Carman deliberately placed his booth in the center of the action.

“Faith comes right alongside of everything else,” he said. “We would hope people would get to the point of saying faith is the basis of everything, but at least they can see it as a part.”

Father Carman’s inspiration for his spin on evangelization came from a Facebook post, regarding a priest in the Midwest who sat on a college campus bench offering confessions, prayer and the opportunity to ask questions.

“I thought, ‘Well that’s the right idea. Be where everybody is,’ ” Father Carman said. “Pope Francis told us very strongly … that he didn’t want the clergy sitting in the rectory or the monastery or the religious house waiting for people to come in.”

Shyness in public displays of faith, Father Carman said, is a common problem for believers. The festival, which draws those from the greater metropolitan area to the St. Leo community, offers an opportunity to normalize Catholicism in everyday life, as well as promote religious vocations.

“Since there are fewer of us, fewer young individuals really get to know a priest,” Father Carman said of the drop in vocations. “Anything like that, where people can get to know us in a positive context … it might give someone the idea, ‘Hey, I should think of that.’ ”

The St. Anthony Festival traces its roots to 1904, when Little Italy was spared from the Great Baltimore Fire that destroyed the city’s business district.

Parish history has it that the inferno was headed for Little Italy when the  St. Leo congregation began praying to St. Anthony for protection. The wind changed direction and spared homes and the church. In thanksgiving, the parish began the festival, which includes a Mass (with parts spoken in Italian) followed by a procession with a statue of St. Anthony.

Father Carman will be back at his booth Aug. 18-19, when the church stages its St. Gabriele Festival.