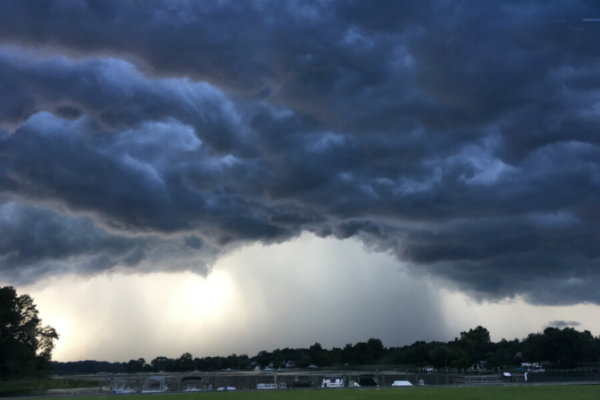 While we were visiting my in-laws on Maryland’s Eastern shore, my husband took our boys fishing. The skies looked ordinary enough when they left. But not even an hour later, he texted me the photo above.

“COME HOME!” I texted him. He didn’t need to hear it from me. They were already getting ready to go home.

They made it home as the rain was starting, but there were no fish for dinner. Luckily I already had dinner in the oven. 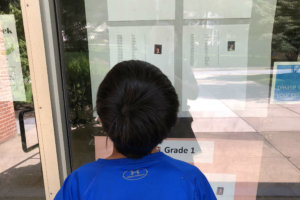 As much as I want to believe summer is going to last forever, the word around here is that school is starting in two weeks. Last week our elementary school posted the class lists inside the windows of the front of the school.

I thought our boys would want to run to school to see the lists, but they were ambivalent. So we didn’t rush to see them. The next day on the way back from an errand I suggested that we stop by school to take a peek at them, and we did.

I love that they have some time to get used to the idea of who’s in their classes. And I am glad we’ve been praying for their teachers because I’m always a little nervous going into the new school year.

Did you see the Perseid meteor shower? Neither did we. Two nights in a row, though, our 8-year-old propped up his pillows and pulled back the curtains so he could watch for them as he fell asleep.

After the first night, his grandfather explained to him what meteors are, sketching out the solar system on a piece of paper as he talked, and showing him how comets move through space.

Later I said to our little astronomer, “Did you learn something tonight?”

“Yes,” he said. “I never knew Grandpa could draw like that.”

Ah, yes. The most important lesson of all. 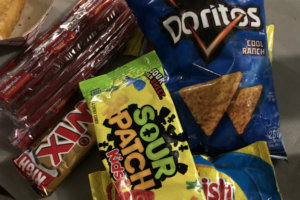 Friends invited us to join them for an evening at their pool. It was “trivia night,” and there was a name-this-tune bingo game. I barely know the names of songs I actually know, but the one featuring current music was a mystery to me. (My music knowledge is limited to country, folk, musicals, and Bible camp songs.)

So I wasn’t even helping Daniel. And suddenly he jumped up and ran to the front of the pavilion to show the man playing the songs his completed Bingo sheet.

What did he win? Just the best prize ever: $10 to spend in the snack bar—the very same snack bar where we had already bought cheeseburgers, hot dogs, mozzarella sticks, ice cream, and Choco Tacos. So he and his brother went over and had the snack bar shopping trip of their lives.

Yes…yes, I did. Along with a sweet, Twizzler-filled memory that will go down in family history. 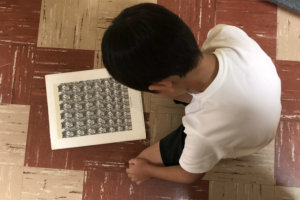 As I was digging through the bins full of pieces of my past, I found one of those 5-D posters people had when I was in college. Mine is a sea of wolf faces. If you stare through it, you see a howling wolf standing there. I had a hard time explaining to our sons how to see it until I found instructions on the back of the poster written conveniently in a dozen languages.

Now one boy can see the howling wolf, and the other can’t. But I am sure one day they will both be able to do it.

What happened to the 5-D poster trend? Was it a trend that continues today among college students? Or, since I am so rarely trendy, except perhaps with my affection for avocado toast, was it never a trend at all? 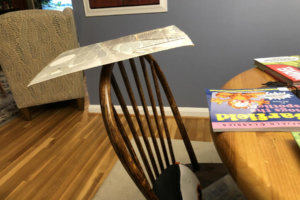 The other night our younger son was looking at the wolf poster and he said, “Where can I put this?”

So he did, balancing it precariously there.

I was sure gravity would intervene, but the poster stayed there for a while until we took it down.

I took our boys to mid-day Mass for the Feast of the Assumption, and I was asked to read the first reading and the psalm. I haven’t lectored in years and years. But somehow it made sense that I would be asked to lector on a day when I was reeling a bit from the news that had just broken. God knows when I need to get away from my own thoughts and be pressed into service.

The boys loved that I was lectoring. They sat next to each other, behaving beautifully, and watched me intently. A few years ago, if you had told me there would be a day I could leave them side-by-side in a pew while I lectored, I would have laughed and laughed. But they were angelic.

Before we went to Mass, I spoke with them simply and briefly about the news from Pennsylvania the day before to prepare them for what they might hear. I was glad I had prepared them because the priest did discuss it in the petitions. And naturally, even though you might think your children aren’t listening to everything during Mass, mine were, and they had more questions afterward.

You can read more quick takes at Kelly’s blog, This Ain’t the Lyceum.