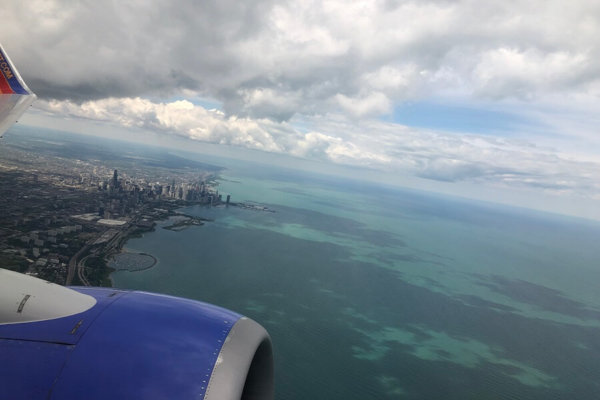 I find flying to be completely exhilarating and also terrifying. I do love to fly. But I also believe that we will probably crash. I’m always astounded when we land safely at the other end. I have done some of my most intense praying on airplanes. 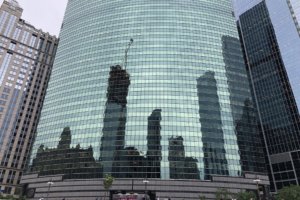 I spent most of the week in Chicago at a Jesuit Leadership Seminar. I was so honored to go, and I loved meeting other people who work in Jesuit higher education. I saw more of Chicago than I’ve ever seen before—even though it wasn’t a touristy trip. Our schedule was packed.

One day, in between the presentations and discussions, we had the chance to go on an architecture tour of the city by boat. It had rained earlier in the day, but I didn’t want to miss it. In the end, the weather was cool and gray and perfect. And the tour was absolutely extraordinary.

Our tour guide, Alyssa, was informative, witty, and even had a few great puns, such as, “You should never take marble for granite.” And the history and diversity of the architecture were fascinating to hear about. 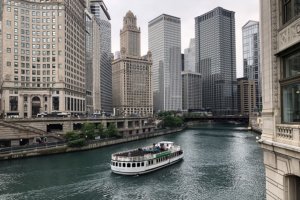 I took many notes on the seminar talks, and I’ve been left with so much to think about. One piece that I keep coming back to was something the next president of Santa Clara University, Rev. Kevin O’Brien, S.J., said during his presentation. He told us to be three things: attentive, reflective, and loving.

Doesn’t that sound like a beautiful approach to leadership? And to marriage? And to parenting? And everything else?

I didn’t manage to find a piece of deep dish pizza or eat a Chicago hot dog (which I’m not actually sad about), but I have plenty to chew on after all the presentations. 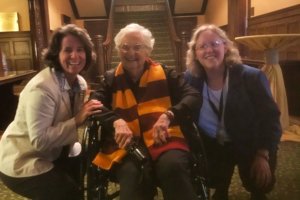 One day one of the organizers told us there would be a special surprise guest that evening. I thought I heard something about Loyola University Chicago athletics. And I thought, “I wonder whether it could be Sister Jean,” thinking of the chaplain to the men’s basketball team.

Then that evening, just as we were gathering for our group photo, I glanced over and saw Sister Jean arriving. I was thrilled to meet her, but as so often happens to me, I had nothing particularly insightful to say. I simply told her how nice it was to meet her and said that those of us who were at Loyola Maryland had enjoyed watching Loyola Chicago do so well. Then a friend took a photo with her and my fellow Loyola Maryland colleague who was also at the seminar.

Later we all sang happy birthday to Sister Jean because she will turn 100 later this summer. She thanked us, and then—in a brief, compelling, motivational speech—she told us how powerful the work we are doing can be. After that, I felt prepared to take on anything.

No wonder Sister Jean’s team went so far the year they reached the Final Four. 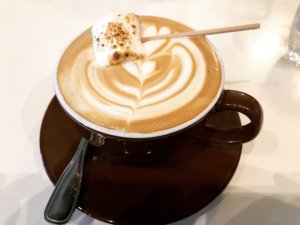 When I found out I would be going to Chicago, I mentioned my trip to two friends who are there. I wasn’t able to connect with one of them because of my tight schedule, but my friend Sara took the train in from Indiana to meet me.

Sara and I had never actually met, but we’ve known each other for more than eight years. We met in an online adoption forum. Back before social media was the thing, we had this lovely forum where people posted questions and shared updates, and we supported one another. We all had screen names. I don’t remember Sara’s. Mine was probably swattergirl.

We both adopted children in 2011, and now we stay in touch on Facebook and Instagram and—as of this week—in a little coffee shop in Chicago. We sat and drank marshmallow lattes and discussed everything. I feel I know her so well, but we still found plenty to say—you know, the way you do when you’ve been friends for eight years but never met in person. 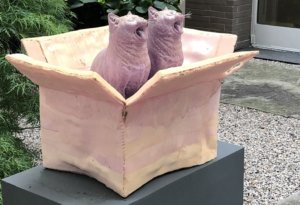 Are you wondering how my family survived in my absence? No, of course you’re not, because you know that my husband is the most competent half of this marriage and handles all the laundry and so much else.

I did what I could to make it easier—packing lunches ahead of time, making sure our afterschool sitting arrangement was in good shape, and assuring John that I would order Chinese food for dinner for the one night he couldn’t get home until late. It seemed the least I could do from Chicago—and it would be easy enough for me to order it online.

Then I completely forgot. Luckily that evening our sitter—who has some sixth sense or just knows me well—texted me to ask what time the food was coming. I excused myself from a conversation, called our usual Chinese place, and placed the order. Even then, I forgot to include a tip and had to call back. But we got there in the end.

Now I’m back in my regular short-order cook role, feeding my children who are not in any way like these two meowing cats in a box. I just liked this sculpture when I saw it in Chicago.

Today is my sister Maureen’s birthday. I sent her a gift and a card, but I’m sure what she really wants is a limerick.

Have you met my dear sister supreme,
Whose shelves are a booklover’s dream?
She speaks Latin with ease,
Raises kids who say please,
And she likes her iced coffee with cream.

Of course, now my other two sisters may resent that I said Maureen was supreme, but today is all about the birthday girl.

It’s also about fifth grade graduation, but I’ll have to share about that later. My eyes are getting misty.