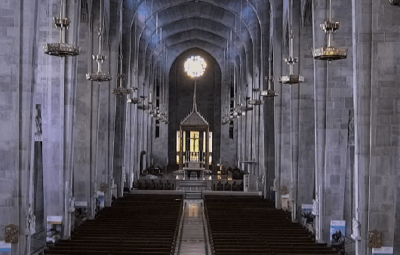 Livestreamed Masses without the physical presence of the faithful are broadcast from the Cathedral of Mary Our Queen. (Screenshot)

Responding to editors’ requests for a regular sampling of current commentary from around the Catholic press, here is an unsigned editorial titled: “A response to ‘We are an Easter people,'” which appeared online April 4 on the website of Our Sunday Visitor, a national Catholic newsweekly based in Huntington, Indiana. It was written by the editorial board.

A recent open letter from a group of concerned Catholics calls on the U.S. bishops to take steps to ensure Catholics have access to all of the sacraments during the coronavirus pandemic.

Titled “We are an Easter people,” the message calls the sacraments the spiritual “personal protective equipment” of Catholics that “enable us to be in the field hospital of the sick and the dying.” It asks the bishops to provide “safe access to the anointing of the sick” and “some form of public celebration of Mass during this time of strife and pandemic,” and for them to “keep our churches open for prayer and adoration.”

While this clearly is a “cri de coeur” from those who, like we, desperately miss the sacraments during this time of global crisis, we strongly believe that much of what the message advocates is ill advised and, worse, could cause great harm.

We should note that we do not disagree with the entire message, and we certainly understand the sentiment behind it. We strongly agree that the sacrament of the anointing of the sick should be widely available, particularly at a time when reception of other sacraments isn’t possible. By nature of their celibacy, priests are “free” to serve in just such a capacity, while at the same time taking stringent precautions. With no spouses or dependents, priests are available — and even called — to reach out to those most in need and bring them God’s grace.

That being said, these heroic acts of love and service should be restricted to those priests outside the most vulnerable population (as deemed by age or condition), and only if their bishop has deemed it to be prudent. Some dioceses are asking priests to volunteer or have devised plans that ask a limited number of young, healthy priests to dedicate themselves to providing the anointing of the sick to the gravely ill. During this time, that should be their only task, and they should remain isolated from others — including other priests.

Though the sacrament of reconciliation was not discussed explicitly within the message, we also believe the church and bishops should find a way to make this one-on-one sacrament available, if possible, while exercising all possible precautions.

But with all due respect to Janet Smith, who has contributed many times to these pages and whose initiative this is, we have serious concerns about several other points contained within.

Early on, the open letter raises the question of religious liberty. We, of course, agree that religious liberty needs to be upheld: It wasn’t long ago that Our Sunday Visitor sued the federal government over the contraception mandate. But to frame questions of public health as matters of religious liberty when bishops themselves have exercised their authority to restrict access to the sacraments is to create a straw man. And it’s a straw man with consequences, creating strife between lay Catholics and their bishops at the very moment when the church needs to be united in prayer, supplication and penance for those poor souls who are suffering and dying from COVID-19.

Underlying the document is a view, which is misguided at best, that receiving the sacraments are unalienable rights. The church’s sacramental theology explains that they convey Christ’s grace, “the gratuitous gift that God makes to us of his own life” (Catechism of the Catholic Church, No. 1999). As gifts, the sacraments are given on the giver’s terms — that is, on the terms of the church. Sacraments should not be sought or received out of a sense of entitlement, and we especially should not demand them when such demands could lead even to death. “Obedience is better than sacrifice,” Scripture reminds us (1 Samuel 15:22).

Regarding access to the holy Eucharist more particularly, this is a time of great challenge for the church and the world, and sacrifices, unfortunately, must be made by all. Any potential distribution of holy Communion makes the presider particularly vulnerable — both in the giving and receiving of the virus. The average age of our American priests is above 60; that places the majority of them in a “protected class” during this outbreak. There is a great danger in turning the priest into a vector of the disease by putting one man in contact with the multitudes, thereby becoming less a minister of the sacraments and more an angel of death.

It is irresponsible to assert that we know enough about the virus to encourage, in good conscience, the sorts of decisions that could very well end up becoming matters of life and death. The supposition that we can simply wave a magic wand and make Communion available to all in the midst of this crisis is idealistic to an extreme — and, when considering all the people that it puts into harm’s way, selfish at best.

Some of the other proposals listed are unclear, but the open letter explicitly asks bishops to relax the suspension of public Masses, especially at Easter. But, again, to what end do we ignore the recommendations of public health officials who have determined that things undoubtedly will get worse before they get better?

Had the U.S. bishops’ conference opted to issue national guidelines or centralized pastoral guidance that could have been modified at the diocesan level, perhaps that would have helped unify Catholics across the country and soothe souls during this time of trial — even if it might not have satisfied those who drafted this letter.

In the midst of this public health emergency, however, individual bishops have acted in faith, charity, justice and an overall concern for the common good; they have not simply taken their cue from civic leaders. Moreover, the decision to suspend public Masses in their various dioceses has created a massive financial burden — the consequences of which the church will be facing for the foreseeable future.

For it is clear that this crisis will leave a lasting impact on the institutional church in ways we cannot now even imagine. Furthermore, we know many people already are not taking this crisis seriously. Why embolden them further? All of us who desperately are missing the sacraments right now could be living with the consequences of this pandemic for decades if the virus becomes widespread among our nation’s vulnerable presbyterate.

This open letter fosters further division among Catholics during this time of global crisis, tragedy and grief. This is a time when we should be coming together — striving for unity even without physical community. So much work has been done by so many people to unite the church during this moment. Protesting the theologically sound, pastorally sensitive decision of those bishops who have clearly acted in the interest of the common good is both imprudent and dangerous.

The magnitude of this crisis requires bold actions in response. In shutting down public Masses, the bishops took a bold move that will cost them dearly. But their choice was prudent and loving. Because while the body of Christ in the Eucharist is most assuredly worth dying for, we should never risk killing the members of the body of Christ in order to receive it.