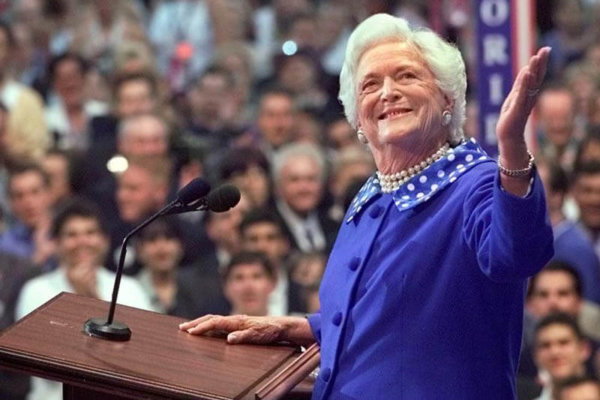 Former first lady Barbara Bush, the wife of one U.S. president and the mother of another, died April 17 at age 92 at her home in Houston. She is pictured in a 2002 photo. (CNS photo/Andy Clark, Reuters)

Along with many in this country and around the world, I mourn the loss of Barbara Bush, the former first lady who died April 17 at the age of 92. In my few and brief encounters with her, I always found her to be kind and gracious.

What I learned is that her many years as the wife of a politico certainly taught her tact and diplomacy.

I remember early in her husband’s presidency I was covering Mrs. Bush’s visit to a Catholic school in Washington where she brought a bundle of books to donate to the school library. During the visit, she read to the children and then invited their questions.

Mrs. Bush handled quite deftly the typical queries from the children — What’s it like to live in the White House? Why didn’t she bring her dog with her? etc. Then came a question from out of left field. A student stood up and wanted to know if the first lady could intervene in a standoff between the student and her older sister because the older sister would not allow the younger girl to play with her Barbie dolls.

Mrs. Bush thought about the question for a few seconds and then responded: “You tell your sister that Mrs. Bush thinks she should share her Barbie dolls with you, but you must never take your sister’s toys without first asking permission.”

The young girl seemed to appreciate the answer because she rewarded Mrs. Bush with a hug. The first lady not only charmed her questioner, but the other students and the adults who witnessed the interaction.

But, my brush with Mrs. Bush dates back even further than that. When George H.W. Bush first sought the Republican nomination for president in 1980, Mrs. Bush visited Rider College in New Jersey where I was a journalism student. We wannabe journalists got to stumble and fumble along as we covered the visit for our campus newspaper.  She was patient and tolerant of us as we learned our profession.

Over the years, I have learned that her kindness was genuine and not just something hustled out to craft a public image.

A buddy of mine — a railroad worker who sometimes served on trains carrying dignitaries — told me that when Mrs. Bush, a frequent passenger, was on board she made sure the train employees took time for lunch. On many occasions the first lady actually brought brown bag lunches for the men who worked the train but could not leave their posts. Sometimes, my buddy told me, the first lady would sit and chat with them.

Much has been written and commented upon about her devotion to promoting literacy and reading. But, Mrs. Bush was equally committed to other causes as well.

She was a staunch advocate for civil rights. One biographer noted that back before her husband entered politics, when the Bushes traveled to their summer property in Kennebunkport, Maine, Mrs. Bush would not stay in hotels where blacks would not be accommodated.

Later, when she became first lady, Mrs. Bush hired Anna Perez to be her press secretary, the first African- American to hold that post.

Mrs. Bush also not only championed those who contracted AIDS-related illnesses, but fought to overcome the stigma and the prejudices associated with the disease. When she was first lady from January 1989 to January 1993, erroneous assumptions were made on how AIDS could be contracted.

She visited hospices where children and adults with AIDS were being treated and she was frequently photographed hugging and interacting with the patients. She was doing this at a time when many thought the illness could be caught through casual contact.

Mrs. Bush also was a distant relative of Franklin Pierce, our 14th president. You would think with that pedigree, she would be a stuffy, stiff and formal person. From what I understand that is far from true. She is said to have had a wonderful sense of humor.

With her signature white coif and strand of pearls around her neck, Mrs. Bush cut quite a different figure than her predecessor, Nancy Reagan. Mrs. Reagan was known for her impeccable sense of style and keen fashion sense. Mrs. Bush was less fancy and, not long after moving into the White House, she is reported to have quipped, “A lot of fat, white-haired, wrinkled ladies are tickled pink.”

When she and President Bush visited England, then-Prime Minister Margaret Thatcher’s husband, Dennis, greeted her with a kiss on the back of the hand. When photographers who missed the encounter asked for it to be repeated, Mrs. Bush took Thatcher’s hand and kissed it.

Perhaps the greatest tribute to this lady can be found in those who disagreed with her or who did not share her political point of view. Former President Bill Clinton, who defeated her husband’s attempt at reelection, issued a statement calling Mrs. Bush “a remarkable woman who showed us what an honest, vibrant, full life looks like. Hillary and I mourn her passing and bless her memory.”

Former President Barack Obama said that Mrs. Bush’s life was “a testament to the fact that public service is an important and noble calling.”

In addition to her husband and five children and 17 grandchildren and seven great-grandchildren, Mrs. Bush is survived by many like me who had brief interactions with her, and came away convinced they encountered a great lady. She will be sorely missed.

Richard Szczepanowski is a reporter for the Catholic Standard, newspaper of the Archdiocese of Washington. This commentary was published on the paper’s website April 18.