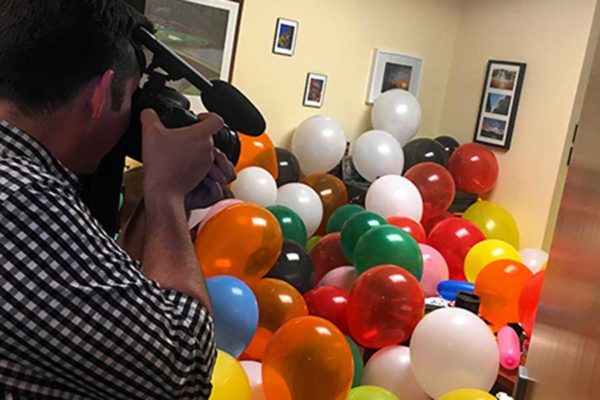 During my 19-year career, I’ve seen colleagues come and colleagues go. The hellos I look forward to. The goodbyes I dread.

This week I’m facing another farewell. On Friday one of the colleagues I work with most closely is leaving.

He and I are both former journalists whose paths crossed 12 years ago when we were in different jobs—back when he was a news reporter and I was a public information officer. Back then, I didn’t know him well, but I could tell he had a sense of humor and that he was good at his job. A couple jobs later for each of us, he applied for a position in the office where I work and landed it.

Over the past six years we’ve brainstormed and strategized and worked our way through some incredibly challenging times. We’ve celebrated many small victories—and a few big ones. We’ve agreed and disagreed and praised and criticized each other.

We’ve laughed more than people should probably laugh in the workplace, including this week when some of our colleagues pranked him by filling his office with balloons.

In the serious moments, we often have very different styles and approaches to problems. Sometimes he’s right. Sometimes I am. Sometimes we both might be right, but for different reasons. I don’t know what he’s learned from me, but he has taught me many things.

The other day he said, “I know you don’t usually listen to me,” and I stopped him.

“I always, always listen to you,” I said. “I just don’t always do what you say.”

When he called to tell me about this job offer, I knew right away he was going to take it.

“As your colleague, I want to ask you to stay,” I told him. “But as your friend, I know you should take this job.”

And—certainly not because I said to—he did. It’s a perfect next step. He will go on to do amazing things there—just as he has as a member of our team. I will continue to throw myself into my work as I always do, working alongside some terrific people. It will be different, and I will miss working with him, but I have faith that all will be well.

My life right now is focused on commencement season. At commencement, all the conversation is about how endings are really beginnings that bring new opportunities and new discoveries. And, as much as I resist these transitions and would love to avoid them altogether, I feel certain that is true.

I find myself remembering a moment two years ago when my Jesuit friend, Father Frank Nash, decided to move on to a new position at another university. At the time he said the easy choice for him would be to stay; the more difficult, more daring choice was to go. I find myself realizing that even though I did not seek out this opportunity, this is still a time for me to grow.

After all, whenever you most feel you have reached an ending, you find a beginning—a possibility you never realized was there.

So here we are. An ending and a beginning. I wonder what the next chapter will hold.