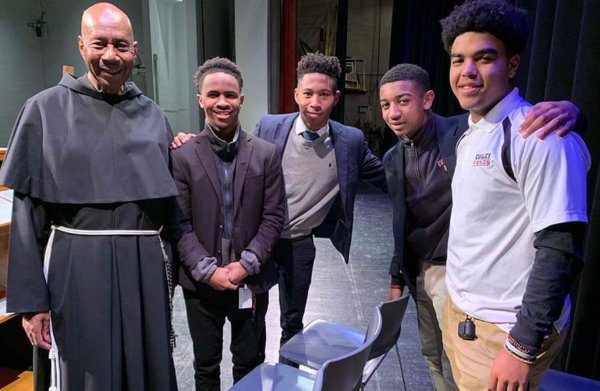 The Archbishop Curley community honored African-American history and culture through the Franciscan perspective with a special Feb. 19 event that featured a distinguished guest speaker and a creative approach to meditative prayer.

The guest speaker was Brother Edward “Ed” Handy, an African-American friar of the Conventual Franciscans, who currently calls St. Casmir home. He considers himself a Baltimore native by way of Catonsville. Brother Ed is 80 years old but looks, speaks, moves and acts half his age. Only his childhood stories confirmed his status as an octogenarian, such as the street car rides he and his siblings took to school. They’d scrambled for seats in the quest for a sturdy lap to hold their heavy books.

Brother Ed heard the call to religious life more than 60 years ago. He attended St. Anthony Seminary in Ellicott City and eventually found himself deep in upstate New York, where the snow drifts were so high, they could sled out of the second story windows. Brother Ed found that he had a gift for working with behaviorally-challenged children and became a special education teacher. Eventually, he moved on to New Jersey where he spent more than 20 years ministering to the homeless and AIDS patients. With each of his stories, it became more and more evident that Brother Ed is living in the footsteps of both Jesus and St. Francis of Assisi.

After Brother Ed’s presentation, students presented the Prayer of St. Francis by connecting each part of the prayer with quotes from influential African Americans. Many of the famous faces that flashed across the screen had changed the world during the course of Brother Ed’s life. Though some of them have served their earthly duties and moved on, the effects of their courageous feats, large and small, continue to impact the young people who comprised the audience that day.

Conventual Franciscan Father Chris Dudek, who works closely with students in Curley’s Franciscan Youth ministry to arrange special events like this, said, “I think that it is so important that our students have good role models to inspire them to live lives of peace, charity and courage in the footsteps of St. Francis of Assisi. Brother Ed is an example of someone who lived our Franciscan ideals and just one example of an inspiring modern leader.”