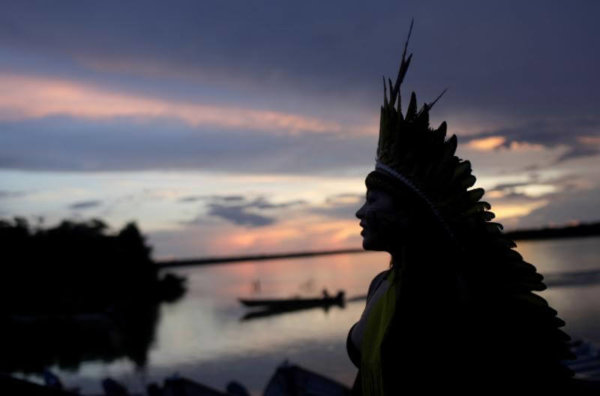 A leader of the Celia Xakriaba peoples walks along the banks of the Xingu River in Brazil's Xingu Indigenous Park Jan. 15, 2020. (CNS photo/Ricardo Moraes, Reuters)

Pope Francis can be stubborn.

If Americans are unlikely to care about Ukraine, as our secretary of state reportedly suggested recently, what is the likelihood American Catholics will care about the Amazon?

I admire Pope Francis’ stubbornness, therefore, in insisting on a synod of bishops at the Vatican last year to focus the church’s attention on a remote and generally unknown corner of the world.

To say it is unknown is to say that it largely goes unnoticed by Western countries, unless they have industries that are benefiting from the region’s resources. It is not unknown to the 31,000,000 people who live there, including 3,000,000 indigenous peoples and descendants of African slaves.

Theirs is a region five times the size of Alaska, a region claimed by multiple countries and a region that is undergoing profound environmental and social change.

As a bishop of Latin America, Pope Francis is well aware of the Amazon — its challenges and its people — which is why he called the synod and now has written a postsynodal apostolic exhortation titled “Beloved Amazonia.”

This apostolic exhortation has been the subject of much speculation about what it might or might not say about the region’s painful shortage of clergy. Because the Eucharist and confession are rarities in many communities, would he allow married deacons to be ordained priests, as a majority of the synod fathers proposed?

While the pope, as is his style, allowed an open discussion of this topic, clearly he felt there was not a consensus supporting such an exception and that he himself was unprepared to take such a step. This was greeted with disappointment by some and relief by others.

What is unfortunate about this and other controversies is that the enormous pastoral concern that the Holy Father and the church has for this region got lost.

To modify an old political catchphrase, “It’s about the souls, stupid.” The souls of the Amazonians, many of them forced from their land, exploited and vulnerable. The soul of Amazonia itself, being stripped by fire and dam and chainsaw. Even the souls of those who would exploit and burn and lay waste, and the souls of those of us who turn our backs on the plight of the vulnerable.

“Beloved Amazonia” is a passionate document in that it weaves in not only the testimonies of numerous previous church statements, but also the reflections of Latin American poets such as Ana Varela Tafur:

Many are the trees

and vast are the forests

purchased with a thousand deaths.

The document pays tribute to the land and to the diversity of cultures that subsist upon it. At the same time, the pope knows that there is no returning to some perfect past. Modernity has arrived, and with it all sorts of changes that — even with the best of intentions — will impact the people and their land.

There is a kind of a problem social scientists call a “wicked problem”: complex, hard to define, without definitive solutions. The plight of the Amazon is a wicked problem demanding enormous resources and focus from a variety of countries, yet without certainty of the results nor the avoidance of unintended consequences.

The pope asks that we, the church, accompany and support the Amazonian peoples, and that we engage them in the search for solutions. He also reminds the church that it is not an NGO or aid organization only.  It is to evangelize and bring the good news to the people of the region. Christ is the answer, even as we are to be the hands and the feet of Christ.

Greg Erlandson is the director and editor-in-chief of Catholic News Service. He writes the CNS column "Amid the Fray."