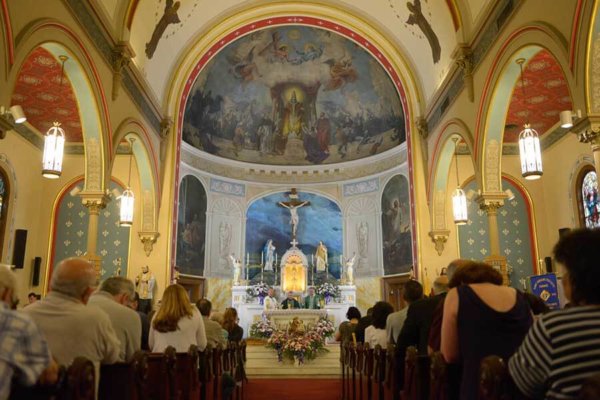 Worshipers pray at a 2016 Mass at St. Leo the Great in Little Italy. (CR file photo)

It’s Sunday after Mass and the “Italian word of the day” I received by email was “appartenere,” meaning “to belong.” No coincidence since I already had been formulating this column’s topic – about belonging – during Mass this morning at a Catholic church near our west coast Florida home.

Around here, I tend to “church hop.” Sometimes, like today for the Second Sunday in Advent, my husband Ken and I attended Blessed Sacrament in Seminole. More often we traipse 20 minutes to a large parish in St. Pete Beach called St. John Vianney. Once I went to a church named St. Jerome during Lent. Often, we attend the nearby Church by the Sea – fantastic music there.

Although we have lived here part-time since 2002, I have not seemed to “lock into” a specific Catholic parish. I keep saying I will, but then I go home to Maryland. I keep promising to get involved, yet don’t. I do, however, peruse their bulletins to see what various needs the parishes might have, such as donating backpacks and school supplies for a back-to-school campaign, or groceries for a food drive.

Today I looked around the church at the hundreds of people sitting dutifully in the rows of pews and realized I didn’t know a soul. I didn’t like it. The church also was too dark and enclosed for me. I like plenty of light. I did not feel as if I belonged.

Yes, I belonged as a practicing Catholic. Sure, the prayers and format of any Catholic Mass anywhere are familiar. Yes, I shake hands for peace and take Communion, yet any time I attend a church that is not my beloved home parish, St. Leo the Great in Little Italy, Baltimore, I simply feel as if I don’t belong.

Today, I didn’t know the priest speaking the homily. I didn’t know the youth minister’s name who made announcements at the end of Mass. I didn’t know any of the ushers in their nice white jackets and red bowties. It only made me miss St. Leo’s more, where it feels like “home,” where I am involved and where I interact easily with friends, fellow Italians and clergy in greetings, hugs and chatter.

Remember the theme song to the TV show,  “Cheers,” where everybody knows your name? Yeah, like that.

Sometimes you want to go

Where everybody knows your name,

And they’re always glad you came;

You want to go where people know,

People are all the same,

You want to go where everybody knows your name.

I like being in places where people call me by name, to feel that sense of belonging. Belonging is important. Belonging to a parish, a lodge, a family, a health club, a group of friends, a class or even to eat often at a favorite restaurant where you know the staff means feeling like a sizeable part of something.

We tend to prefer places we know, to go where we know people and are familiar with its components, programs, methods, menu and buildings. People know our names, we chat, we make friends and it absolutely feels as if they’re glad we’re there. In places where people know our names, we feel more significant and “seen.” Other than that, at least for me, it feels too foreign, lonely, invisible and excluded.

Years back as a parishioner of the Catholic Community of St. Francis Xavier in Hunt Valley, a very nice gesture Father Frank Brauer ritually did at the end of each Mass was to ask if there were any visitors. As people raised their hands, he would walk around to ask from where they came – whether another city or another parish – and he interacted with them briefly. He then gifted them with a small wooden San Damiano crucifix, emulating the large one hanging behind the altar.

“We ask when you look at this cross, to keep us in prayer, as we will do for you,” he said.

I bet those visitors felt seen and welcomed.

Yes, belonging to places is good – it feels right, we fit in. We should all belong to some place, to some group, to some church, even to someone. Where do you feel as if you belong?

And how about for new parishioners and visitors attending your church some Sunday, how might you help them feel seen – as if they belong there?