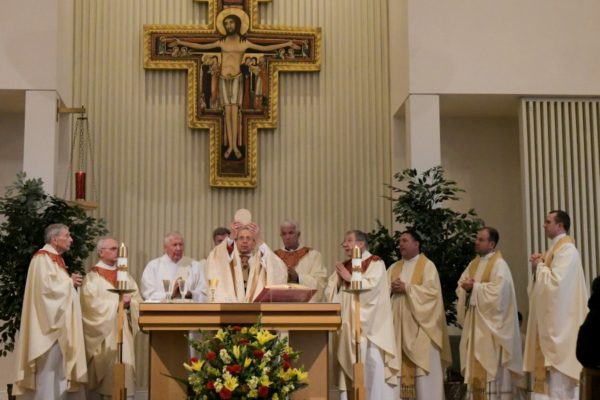 HUNT VALLEY – Though the naming convention is more common today, the Catholic Community of St. Francis Xavier was a pioneer 25 years ago when Monsignor Thomas J. Donellan, then the pastor, insisted on including those first two words.

“You can see that we are all friends here,” said the now-retired monsignor, following the parish’s 25th anniversary Mass May 6. “We all started it together.”
Many also celebrated the young parish together, with Baltimore Archbishop William E. Lori presiding and Bishop Denis J. Madden concelebrating, along with Monsignor Donellan and Father Frank Brauer, the current pastor, and four other priests.

Monsignor Donellan – who will celebrate 61 years as a priest May 26 – and Father Brauer received standing ovations from the congregation when the archbishop acknowledged them in his homily.

“I guess I’d better put my thinking cap on, to figure out how I’m going to get a third standing ovation,” Archbishop Lori joked.

Starting as a Mass station for St. Joseph Parish in Cockeysville – Monsignor Paul G. Cook celebrated the first Mass Oct. 5, 1986, in a ballroom at what is now Delta Hotels Baltimore Hunt Valley on Shawan Road, according to a parish history provided by St. Francis Xavier – the parish has come a long way.
After two years, it became an independent mission, the Catholic Community of Hunt Valley, with Monsignor Donellan at the helm.

One-and-a-half years later, on April 1, 1990, the monsignor celebrated Palm Sunday Mass at the mission’s “interim permanent home,” as the parish history puts it, a former restaurant space in Executive Plaza I on McCormick Road.

“There was only one door in and one door out,” remembered Patricia Allshouse, pastoral associate and director of faith formation at St. Francis Xavier. “You didn’t want to come late, because you couldn’t sneak in.”

At the same time, parishioners were brought together by the intimate space, as well as, according to Allshouse, “real donuts, not donut holes,” and Monsignor Donellan’s directive that worshippers continue to munch those donuts and guzzle coffee until they had made at least three new acquaintances.
“Father Donellan knew he was going to have to build a church,” Allshouse continued, using, as parishioners continue to do, the monsignor’s pastoral title over the more prestigious honorific.
A property, the former Serenity Farms off Cuba Road, had been identified years before Cardinal William H. Keeler, then-Baltimore archbishop, made St. Francis Xavier a parish in 1992. Thanks to a zoning battle, it was 1995 before it received permission to build; on Jan. 17, 1998, parishioners processed from Executive Plaza I to the new church to celebrate the first Mass.

Father Brauer calls the Cuba Road campus, “the best piece of property in the entire archdiocese.”

“We sit up on a hill and look out over Oregon Ridge – it’s just a breathtaking view,” he said.

More importantly, Father Brauer added, “The people care for one another.”

“If somebody’s sick, parishioners will bring them meals or visit them in the hospital,” he said. “They just go out of their way to minister to each other.”

In his homily, Archbishop Lori emphasized “the hard work, the generosity and the pioneering spirit of the founding parishioners of this parish, and its lay leadership over the years.”

He also noted the parish’s “wonderful patron.” St. Francis Xavier was a companion of St. Ignatius of Loyola, the archbishop said, who “spent himself entirely” in his missionary work.

“In our time, in our place, in our circumstances, let us strive to imitate our patron, and let us ask St. Francis Xavier to pray for this community, so it may become ever more effective in spreading the message of Jesus – the Good Shepherd, the guardian of our souls.”

Former parishioners Bill and Truda Fagan came from Traverse City, Mich., for the Mass and gala, which was held at Delta Hotels Baltimore Hunt Valley in the same ballroom where the community began.

“Father Donellan is the one who brought my faith back to life,” said Truda Fagan, “just by his example – the way he lived the Word.”

Parishioners Jim and Andrea Paterson, with their seven children, travel from Lancaster, Pa., every week.

“This is home for us,” Jim Paterson said, noting that his children serve as sacristans, altar servers, extraordinary ministers of holy Communion and lectors. “The church family here is incredible.”

Longtime parishioner Mary Cromwell noted both the congregation’s willingness to serve the poor through outreach ministries and its penchant for looking out for its own.

“We’re very quick to pray for other people; it doesn’t matter who it is,” she said, sitting in a pew before Mass.

“I just can’t believe it – where does the time go?” she continued. “We’ve watched so many little children make their first Communions.”