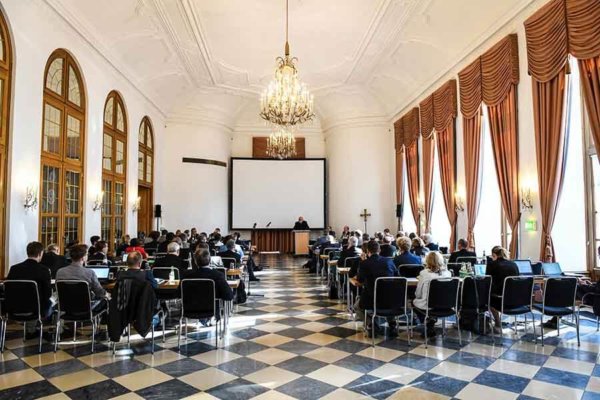 Cardinal Reinhard Marx of Munich and Freising, president of the German bishops' conference, gestures Sept. 13, 2019, during the extended Joint Conference of Bishops and Laity to prepare the "synodal way." The bishops of Germany, reacting to an independent study of the extent of clerical sexual abuse in their country and its possible causes, chose to initiate a "synodal" process that was not a synod or a plenary council. (CNS photo/Harald Oppitz, KNA)

This past June I was in the Munich area for four days, giving a public lecture on Evangelical Catholicism and doing a lot of media interviews. My hosts were exceptionally gracious, but it was also obvious that the Catholic Church in what was once Germany’s most intensely Catholic region is in terrible shape. The numbers tell the tale.

The parish in whose rectory I stayed has some 10,000 parishioners — which is to say, the pastor knows that there are 10,000 people within the parish boundaries who, when paying their federal taxes, tick the box for the Kirchensteuer, the “Church tax.” Having seen years of statistics on Sunday Mass attendance from the German bishops’ conference, I was expecting the pastor to answer my question about his Sunday congregation with a figure somewhere between 700 and 1,000. No, he said; average Sunday Mass attendance among those 10,000 parishioners was 200. And when he asked people politely when he might see them at Mass, he frequently got the answer, “Look, I pay the Church tax; what else do you want?”

So it was with some interest that I read the recent explanation by Munich’s Cardinal Reinhard Marx as to why he and the majority of the German bishops were defying the Vatican and plowing ahead with their “binding Synodal process,” in order to re-examine “issues” such as the Church’s sexual ethic, its teaching on marriage, and its ancient pattern of ordaining only men to the ministerial priesthood. Cardinal Marx claimed that “Countless believers in Germany consider (these issues) in need of discussion.” The not-so-tacit suggestion was that questions once thought settled by the Church were in fact open.

In light of my recent experience in the cardinal’s archdiocese, some questions immediately occurred: Who are these “countless believers”? Do they participate in the Eucharistic community of the Church or do they just pay the Church tax (and get snarky when asked why worship is not on their Sunday agenda)?

And further: How many of these “countless believers,” who seem to think that what is settled is in fact unsettled, have ever had the truths they question explained to them? How many of German Catholicism’s legion of theologians and church workers devote themselves to such teaching? The archdiocese of Munich and Freising has, I was told, some 2,000 employees. Do any of them live the vocation to explain what is challenging in the Gospel and the Catholic Church’s application of it?

Moreover, in what time-warp do these “countless believers” live? The Catholic Church has spent an inordinate amount of time and energy over the past 50 years “discussing” the “issues” that Cardinal Marx suggests are at the top of German Catholics’ concerns. Isn’t the real problem here that, after a lot of discussion and deliberation, the teaching authority of the Church resolved those issues in a way that “countless believers” didn’t like and still don’t like — perhaps because the Church’s settled answers are in severe tension with the libertine public moral culture that prevails across western Europe?

A little honesty here would go a long way.

Catholicism is dying in the German-speaking world, not because the Gospel has been proclaimed and found incredible or hard, but because it hasn’t been proclaimed with joy, confidence, and zeal. Friendship with the Lord Jesus Christ, and incorporation into the community of disciples in mission that is the Church, has not been offered. That is why there is 2 percent Mass attendance in that Munich parish. Recognizing that hard truth is the only path toward a German Catholicism that has something credible to say to the rest of the world Church.