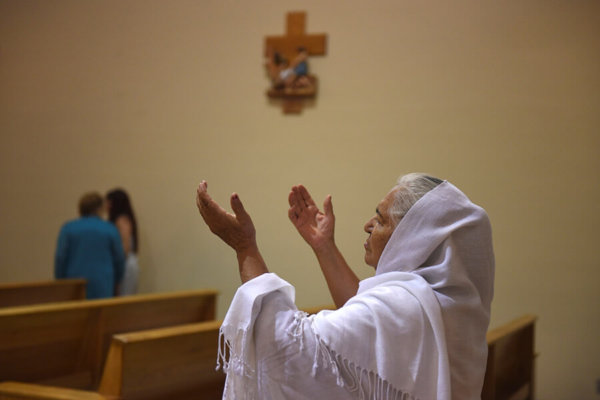 Friends and family attend the funeral Mass of Juan Velazquez at Our Lady of the Light Church in El Paso, Texas, Aug. 9, 2019, six days after he was killed in a shooting at a Walmart store in El Paso, Texas. (CNS photo/Callaghan O'Hare, Reuters)

In the moments it took a gunman at a Walmart store in El Paso, Texas, recently to massacre 22 people — the majority of whom were Hispanic — and wound dozens more, the 56 million of us who constitute the Hispanic population lost our sense of security, of belonging to the whole, that has been won generation by generation here in the United States.

Reports from around the country show that all of us, whether Mexican Americans, Cubans, Puerto Ricans, Central or South Americans or Caribbean peoples, feel less safe, whether our roots in lands now in the U.S. go back, as mine, 325 years, or whether we are recent immigrants.

Veronica Escobar, a member of the U.S. House of Representatives from Texas, said in an op-ed in The New York Times Aug. 19: “Hate and violence are destroying America, and there are people in power giving that hate and violence the cover and fuel they need to survive and grow.”

And G. Cristina Mara, a sociologist at the University of California, Berkeley, who specializes in immigration and race politics, said: “This has impact beyond the first generation. … It doesn’t have to be you who crossed the border. It just has to be you who is not Anglo.” The “shooter,” as he identified himself to Texas Rangers, was aiming at brown people.

Richard Parker, author of “Lone Star Nation: How Texas Will Transform America,” wrote in The New York Times: “My last name is Anglo, but I am the son of a Mexican immigrant.” He wrote that he spoke to a young soldier, Pfc. Richard Riley, whose eyes welled with tears as he viewed the white crosses of the victims and said: “I just can’t believe it. I’m Hispanic too. And I can’t believe that these people were killed because they were.”

The assailant allegedly complained about “the Hispanic invasion of Texas.” The word invasion connotes the intention to conquer, seize control, subjugate the current inhabitants. But we cannot call the immigrants who cross the border invaders.

They are more like the people described by Emma Lazarus on the Statue of Liberty: “Give me your tired, your poor, your huddled masses yearning to breathe free, the wretched refuse of your teeming shore.” They come, first, to survive; to find work to support their families, and in the process contribute to the nation.

Moreover, Hispanics take jobs no one wants — and there are millions of them. At the end of June 2019, the Bureau of Labor Statistics reported 7.3 million job openings, a figure largely unchanged from month to month. You find them in poultry processing plants in Mississippi where immigration authorities recently arrested over 600 Hispanics suspected of being undocumented immigrants. Where both parents worked, both were arrested, the children coming home traumatized to find no one there. In one place, a Catholic parish was left with the daunting job of caring for the children.

This took place the week the president was in El Paso seeking to console the survivors. “Something is shifting,” Parker wrote. “The El Paso massacre brought together the most active of America’s shifting tectonic plates: racism, assault weapons, a national Latino population of 60 million now with a target on its back, Mr. Trump’s white nationalism and his awful manners for a country in mourning.”

But we will survive. “Waves and still more waves have passed over the Spanish-speaking people,” wrote D. H. Lawrence long ago. “But they are still as firmly rooted in the Southwest as a forest of Joshua trees. … They are not interlopers or immigrants but an indigenous people.” And now we are all over the nation.