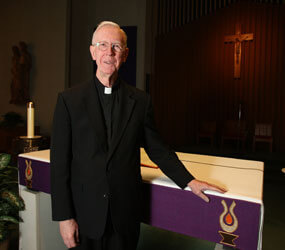 Madeleine Hobik likes to call Father Joseph M. O’Meara the “unsung hero” of the Archdiocese of Baltimore. Without calling attention to himself, the longtime pastor of St. Rose of Lima in Brooklyn has quietly labored for nearly 15 years at the city parish, Hobik said.

“He has truly been a gift to all of us in the parish and the school,” said Hobik, principal of St. Rose of Lima School and the parish’s coordinator of religious education and youth ministry.

“He is extremely humble and a very private person,” Hobik added. “You would never find a more giving person than he.”

After more than 42 years in active ministry, the 70-year-old pastor is retiring, effective Jan. 1. A farewell liturgy will be held Dec. 27 at the 10:30 a.m. Mass, followed by a reception.

Hobik credited Father O’Meara with being a driving force in the success of the school.

“Our school has survived because of his leadership and his support,” she said. “He has helped to keep the tuition frozen for three years and the parish has supported us to make tuition more affordable for our families.”

The pastor attends all the parish fundraisers, Hobik said, and funds raised are directed to the school. He also knows all the children in the religious education program by name and has been involved in social outreach in Brooklyn. He was honored about a decade ago by WJZ-TV with its “13 Salute” for his generous service.

The Baltimore native is the former administrator of St. Cecilia and St. Edward in Baltimore. He also was the full-time director of the Charismatic Renewal who ministered to the Baltimore-area Lamb of God Community. His first assignment after his 1967 ordination was as associate pastor of St. Philip Neri in Linthicum.

Over his priesthood, Father O’Meara has also resided at the Baltimore parishes of St. Jerome and St. Peter the Apostle.

“I’ve always been very happy as a priest,” Father O’Meara said. “I’ve never had any questions or doubts that this is what the Lord wanted me to do.”

Father O’Meara grew up at St. Mary of the Assumption in Govans and was a member of a championship basketball team at what is now Loyola Blakefield in Towson. He spent a year at the College of the Holy Cross in Worcester, Mass. before studying for the priesthood at St. Charles College in Catonsville, St. Mary’s Seminary on Paca Street in Baltimore and St. Mary’s Seminary in Roland Park.

The priest said he was inspired to the religious life by the example of an uncle who was a priest and a Jesuit who lived at Loyola.

The pastor said he enjoys being present for parishioners. While at St. Rose, he oversaw the creation of a gathering space in the church, started a parish Web site and created databases for the parish and school. He also started a group to encourage young women to become more involved in their faith.

In his retirement, Father O’Meara will live at St. John in Westminster. He expects to assist at that parish, as well as others in the area. A lifelong athlete, he plans to keep up with his workout regimen on the treadmill and other fitness equipment.

“I don’t see myself actually retiring,” he said, “just changing the location and the focus.”