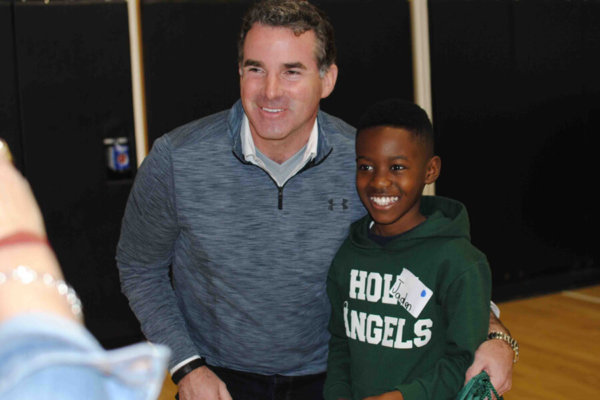 A file photo shows Kevin Plank, founder of Under Armour, posing with a Partners in Excellence student in Baltimore. Plank gave a $1 million grant to the educational program that helps children from low-income families attend Catholic schools. (CR File)

A while back, leaders of Under Armour announced their #WeWill campaign. Dedicated to expanding their impact beyond sports, they ventured into the world of social good, to “invest in America’s youth, so that they can succeed in the classroom and on the field.”

First of all, good for them. Lots of our local youth here in Baltimore have already benefited from their investment, including the now world-famous Cardinal Shehan choir.

What’s most interesting about this for me though, is that the “We Will” campaign is the second step for Under Armour after their “I Will” campaign.

There’s something deeply American and deeply religious about this movement from the individual to the communal. If there was ever a culture built with an eye for the individual it is ours. One of the cornerstones of the movement toward “missionary discipleship” expressed by Archbishop William E. Lori in his pastoral letter, “A Light Brightly Visible,” and in the now-prolific work of Sherry Weddell is the resolution that discipleship is not an inherited right but a call for the person.

Yet we’re also a culture where young people give up whole weeks of their lives and even pay money to serve the poor and vulnerable. As a former colleague from Germany used to tell me, that is a distinctively American phenomenon. Increasingly though our young people and the adults in their lives are finding less and less time to invest in what Robert Putnam termed way back in 2000 as “social capital.” Young people are more and more connected to the communities from which they come and in which they live. Additionally they are increasingly skeptical that the institutions in these communities have their best in mind.  I don’t need to remind you that though Roman Catholic followers of Jesus would imagine ourselves and our Church in many ways, many people put us squarely in that “institution” category.

As Church we’ve been reluctant to embrace a turn toward the individual and there are some very good and theological reasons we’re skeptical. But if our brother in Christ, Kevin Plank, and the good people at Under Armour can do both well, we can too.

In many ways it’s as simple as being able to name at least three young people in your church with whom you have a connection and whom God is therefore calling you to invest in. I had a good mentor who used to say “Don’t just say you love ‘the poor,’ name them.”

We can’t just say, “we love the young church.” We have to name them. Jazmine, Michael, Shantay, Jose and all those other young people in your church require adults who can call them by name. That’s how “we will” be the Church that, with all due respect to our friends at Under Armour, offers a deeper investment in their lives, an eternal one.

Craig Gould grew up in Maine, went to school in Massachusetts, and lived in Alaska, Minnesota and Chicago before moving to Maryland.

He’s the Director of Youth and Young Adult Ministry for the Archdiocese of Baltimore, having served previously at Catholic Theological Union, two parishes and the ministry of Young Life.

Craig went to Marshwood High School in Maine, undergrad at Boston College (which is neither in Boston nor is a college) and for an MA in Theology at St John’s University in Minnesota.

Craig loves all things Boston sports, American history, systematic theology (bonus points if you know what that is) and the Walking Dead. He’s married to a beautiful woman, Katie, and is gifted with 6 overwhelmingly complicated and splendid children, 5 whom he and Katie raise here and one who is already celebrating the joy of heaven.

Craig, author of the 'Boots Laced' Catholic Review blog, is a disciple of Jesus, beloved of the Father, moved by the Holy Spirit and fused to the Trinity.