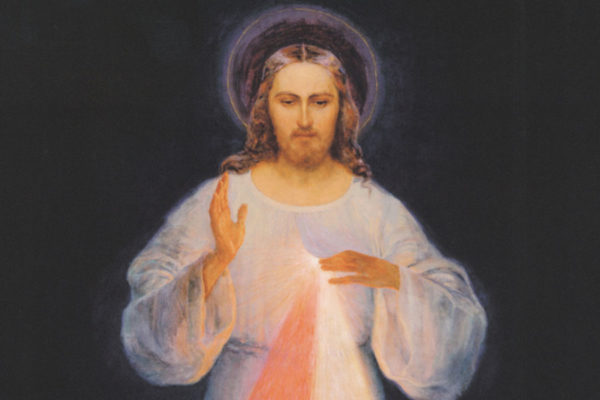 An image of the Divine Mercy is shown in a painting. (CR file)

I can always tell what kind of day my seven-year-old son Frank has had at the moment I see him exit the school bus. It’s in his body language. If he’s beaming and pouncing down the steps, it was a good one. If his shoulders are slumped and he’s dragging his toes, it was not. Even though I don’t have to ask how his day was, I always do. Sometimes he gives me details. Usually he does not.

Frank’s autism limits his ability to communicate. A screen door swings open and closed between us during conversations. Frank’s autism also leads to disruptive behavior, especially at school. His brothers will report his screaming on the bus or running around the cafeteria, which may result in Frank writing an apology note or having minutes docked from weekend video game time. Every once in awhile I deliver Frank a lecture that is as futile as the fine print in prescription drug commercials; all at once minute and obtuse.

My husband and I decided a long time ago that we weren’t going to allow Frank to use his disability as an excuse to misbehave and that we were going to teach him what is socially appropriate and to be accountable for his actions. But, we have also learned that there are times when rather than consequences and lectures, Frank needs something else.

One particular afternoon, Frank came running off the bus towards the porch where I was waiting for him, tears rolling off his cheeks, yelling, “Frank’s a bad person! You’re gonna be so mad at me! I am locking myself in the room for the rest of the day!”

His younger brother was quick to notify me that Frank got into an argument with his friend on the bus.

Before Frank could go up the stairs, I told him to come sit with me. His crying had only gotten worse. “I had a terrible day and now you’re gonna yell at me! You hate me!” he said between sobs.

“I love you very much and I promise I won’t yell,” I told him, patting the seat of his chair. “I just want to hear about your day,”

When he could finally talk, he told me about the painting he messed up in art class, the spilled milk at lunch, getting in trouble for playing around during math class, forgetting his homework and arguing with his friend on the bus.

“You’re not mad?” he said, wiping his puffy eyes.

“Not at all,” I replied. “Everyone makes mistakes and everyone has bad days. My bad days may look different than yours because I’m a grown-up and my problems are different, but the way you’re feeling is very real and is something pretty much everyone goes through. But, here’s the thing, it’s not too late to turn this day around. You’re home now. We’re having spaghetti for dinner. And I see you brought home a new book. Why don’t we read it?”

As we flipped through the first few pages together, he breathed that final cathartic sigh that indicates the beginning of a new and better feeling. I realized that the only thing he needed from me that afternoon was mercy. He needed me to listen to him and to offer him a pleasant distraction from the negativity that had consumed him. Mercy heals. It’s something God offers us and it’s something we should offer to others when we can see that they have given up on themselves. We, too, deserve mercy and should learn to recognize when it is being offered to us and find ways to be merciful with ourselves.

When you are having a bad day, recall these final lines from the Chaplet of Divine Mercy, and remember that God is there to help you turn the page.

Eternal God, in whom mercy is endless and the treasury of compassion — inexhaustible, look kindly upon us and increase Your mercy in us, that in difficult moments we might not despair nor become despondent, but with great confidence submit ourselves to Your holy will, which is Love and Mercy itself.