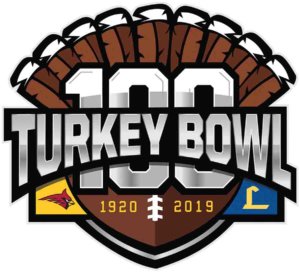 TOWSON – As Mitch McClure concluded fifth grade at St. Joseph School in Cockeysville, there was no doubt where he would continue his education.

“It’s been a part of my family my entire life,” said McClure, a senior and three-year member of the varsity football team who has distinguished himself on the field, in the classroom and in extracurricular activities.

He’s been going to the Turkey Bowl for more than a decade and played in the last two, but the 2013 game remains his favorite. He was in the sixth grade and among the youngest Loyola Blakfield students when a blocked extra point secured victory for the Dons.

They haven’t won since, a streak McClure wants to reverse from his left tackle position, where he is accustomed to the lack of recognition.

“Mitch does not operate in the spotlight,” coach Anthony Zehyoue said. “If a teammate is struggling, he prefers to go up to (them) in private, quietly encourage and support them, throughout the school day and in practice.

“My favorite thing about coaching Mitch is that if he makes a mistake, he only needs one instructional point to correct that mistake.”

Zehyoue notes McClure’s “attention to every detail,” a quality that will come in handy as a he ponders a future in one of the hard sciences, perhaps as a chemical engineer. He has applied to Army West Point, while Boston College, the University of Maryland and Virginia Tech are other college options.

“It’s no surprise that he aspires to serve our country,” Zeyhoue said. “Mitch is more disciplined as a senior in high school than many adults.”

Asked about his favorite learning experiences, McClure mentioned freshman biology, and the “hands-on” teaching style of Ryan Bromwell, the chairman of the science department and himself a Loyola Blakefield graduate.

“(This) is a very inviting place,” McClure said. “You get an amazing education, and you can see the emphasis on religious values.”

His résumé includes membership in the National Honor Society and representing his school at the Arrupe Leaders Summit sponsored by the Ignatian Solidarity Network. Last summer, McClure was one of 11 Loyola Blakefield students to spend two weeks in Belize, where they learned about its Caribbean reef ecosystem and helped construct a home.

His interests range from Spanish IV to the great outdoors, as McClure is vice president of the Sportsmans Association at Loyola Blakefield and member of the Ski Club. He is an experienced camper, fisherman and kayaker.

The 6-feet-3-inch, 210-pound McClure also plays varsity rugby, and intends to try that sport in college. The Turkey Bowl will be the last time he puts on a football helmet and pads. He has high hopes, as the Dons got off to a 6-0 start and take an 8-1 overall record into the game.

“Cohesiveness is behind that,” McClure said. “Everyone knows each other pretty well, and that dynamic helps us hold everyone to a higher standard. Everyone keeps building each other up. We’re all in sync.”